Dr. Toya Jones Frank is an Associate Professor in the Mathematics Education Leadership and Secondary Education programs at George Mason University in Fairfax, VA. Her research focuses on understanding how race impacts mathematics teacher education and enhancing advanced mathematics learning spaces for historically marginalized students. She is also a visiting scholar and program officer at the National Science Foundation for the 2021-2022 academic year. She is a collaborator with mathematicians, mathematics teachers, and teacher leaders in the United States, and abroad. Frank is a former high school mathematics teacher and department chair, and educational consultant for clients including DC Public Schools and ACT, Inc. To learn more about her current research, please visit www.blackmathteachers.org

“It seems to me that whenever we start[ed] succeeding, they start[ed] canceling the programs. When we succeed, the powers that be...they don’t want us to succeed.”

In our previous article, we introduce the Trajectories study, our project that examined recruitment and retention of Black mathematics teachers both prior to and after desegregation. A part of this work included interviewing retired teachers to understand the issue from a historical perspective. The retired teachers who participated in the study taught in public pre- and post-de Jure racially segregated schools in Atlanta, Georgia, and the Washington DC metropolitan area.  As Black teachers, they typically taught in schools where the predominant student population was African American, but a few had teaching experiences where they were the only Black mathematics teacher in the school and/or where the majority student population was white or multiracial.  The pre-20th century historical context of their school districts helped to shape their instruction but is described in another article.  Here, we describe in broad geographical terms the mid-20th century context of the Black mathematics teachers in our study and how these contexts shaped the experiences of Black mathematics teachers. For our research team, historical contexts matter and are key to understanding the roles Black mathematics teachers played in their communities and the lives of their students.

The city of Washington, DC, adjacent to Prince George’s County, Maryland, and northern Virginia is the birthplace of racialized policies and laws that permeated the rest of the nation. These policies originated with the European occupation of Powhatan, Piscataway, Nacotchtank, and Doeg lands (beginning in 1607), the expansion of the Transatlantic slave trade (beginning in 1619), and the swift encoding of ideas of hierarchies of humans based on “race.”

Washington D.C.  Washington DC’s segregated schools were the only Black schools in the nation under the control of Black administrators.  They were considered the best schools for Black people in the nation, and they were demonstrably better than many of the white schools, with more advanced teacher preparation and students with higher achievement than at the schools for white students (for example, the famed Dunbar High School). Black people from all over the South sent their children to DC public schools at a time when one-fourth of the US population still lived and worked on farms and few rural Southerners of any race went beyond the 8th grade.  By 1945, the District had the highest proportion of Black college graduates in the U.S., more than twice that of most cities.  Bolling v Sharpe was the 1954 U.S. Supreme Court decision that desegregated DC public schools. The white flight began in September 1954 with additional court cases and accelerated by 1968 following the assassination of Dr. Martin Luther King, Jr. Black flight into Prince George’s County, Maryland accelerated with the Fair Housing Act of 1968. The oldest teacher in our study began teaching in Washington DC in 1953.

Prince George’s County, Maryland.  The 1936 battle to desegregate the University of Maryland Law School led to increased funding for segregated Black schools, but it was not until 1952 that schooling for Black children was extended from grade 11 to grade 12.  The 24 schools for Black children in Prince George’s County did not begin to be desegregated until 1972, nearly 20 years after the Brown v. Board of Education decision. However, with the population growth of the County after the end of World War II, the Black population became the second largest in the Washington DC metropolitan area, and unlike most areas in the nation, became wealthier as it became more Black.  By 2010, the median income in Prince George’s County had outpaced the national median income for 30 years and contained the second-highest share of Black middle-class residents in the nation. The Prince George’s teachers in our study experienced these transitions.

The state of Georgia is second only to the state of Alabama in the number of historically Black colleges and universities (HBCUs). In fact, six of the ten are located in Atlanta. Vanessa Siddle-Walker and James Anderson document the formation of HBCUs, Black teacher preparation institutions, community-based educational institutions, and statewide teacher professional development networks for Black teachers from the mid-19th century, many of which continued through the late 20th century.

As a southern state, Georgia public schools were racially segregated. The Brown v Board of Education decision had very little impact on state schools, but a 1973 compromise pleased the Atlanta residents who strove for Black political and economic power, growth away from the state’s dying agricultural economy, and a move toward a global corporate economy. In exchange for the appointment of a Black school superintendent and the transfer of the school system’s administrative power to Black officials, Black leaders agreed to leave most of the system “totally or virtually segregated” with 90 percent of their students Black. This compromise marked the end of a century-long campaign to integrate Atlanta’s public schools perceived as the only way to improve education for Black children.

As the nation’s fourth-largest Black-majority city in 2010, Atlanta is a center of Black wealth, political and social power, technology entrepreneurs, education, and culture including film and music. As the city grew it also became the highest in the nation for income inequality in 2012.  In the interim, 8th grade Black students in Atlanta public schools were making significant progress on the U.S. Department of Education’s National Assessment on Educational Progress, increasing by a stellar 10 points on reading assessments, more so than Black students nationwide and all students in the state of Georgia between 2002 and 2013. This growth led to an assumption that the Black educators in Atlanta were engaged in a test cheating scandal on an “incorruptible” national exam, rather than a recognition that they were highly skilled, culturally responsive educators capable of producing Black student excellence. Black mathematics teachers in our study were deeply impacted by this context.

The Washington DC region and the Atlanta schools had a larger pool of Black mathematics teachers from which to draw when educational leaders from the 1950s to the 21st century made racist decisions to break the connections between Black teachers and Black students through the policy pushout of veteran Black teachers, the influx of young, white, inexperienced teachers into Black and Brown schools, and the microaggressions that drive Black teachers out of the classroom. This phenomenon is still experienced today.

Yet, the retired Black math teachers in our study resisted these efforts. Despite the DuBois-Washington debate, they understood mathematics to be as important for the soul of humans as the humanities and that it does not exist only to serve industry and economics. It is not race-neutral, nor should it be, and the “flavor” that the retired and contemporary Black math teachers bring to instruction is as much about a social justice mission of eliminating racism as it is to share the joy of solving derivatives. The purpose of Black mathematics teachers' resistance to educational racism is to humanize both the Black math teachers from racism and to liberate the mathematical content from its practical and transactional applications.  The social justice intentions are equity for all people, this time through a love of mathematics. The long history of effective Black teachers in these regions, including Black math teachers, bears greater examination to learn more about how to expand the expression of mathematical excellence among Black children and youth.

Dr. View is an emeritus professor in the Graduate School of Education at George Mason University. Prior to joining the GMU faculty in 2005, Dr. View spent more than twenty years working with a variety of non-governmental organizations to create space for the voices that are often excluded from public policy considerations: women, people of color, poor urban and rural community residents, and especially youth. She has also been an educator in a variety of classroom and community settings, including as a middle school humanities teacher at a DC public charter school, as the education and training director of a national environmental justice and labor organization, and as a professional development trainer of in-service classroom teachers. Dr. View’s research interests include history education; critical teacher professional development; civil rights and labor education; and teaching for social justice.

Mathematics Adventures for All with MTSS A.K.A.RTI

Top five reasons to go to the 2015 NCTM Annual Conference 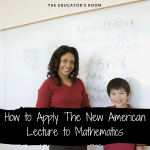 How to Apply The New American Lecture to Mathematics 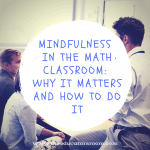 Mindfulness in the Math Classroom: Why it Matters and How to do It
« There’s One in Every Class: The Musings of a College Instructor
Tips for Supporting Multilingual Learners with Writing »