Like most kids my age raised in a rural area, I was taught to believe that homosexuality was wrong. There was just no other way about it. A boy and a girl; a gentleman and a lady; a mom and a dad. That was the only combination. No bones about it.

That is until the last day of school in my senior year, when one young lady used her Senior Sendoff Speech to declare that she is gay. While most others made the content of their speeches fun, funny, or lighthearted, this 18-year-old came out of the closet.  I’ll never forget the teachers talking in the hallway after class, as they tried to kick the tires on whether this was the first time anyone had ever come out in our school.  It was the first time I heard people talking about what was “wrong” with a gay person.

Just a few months after the Sendoff Speeches, I moved to college and finally learned about people in the lesbian, gay, bisexual, and transgender (LGBT) community. I was a resident adviser for the largest dormitory on campus, and another RA I worked with was gay.  I found her to be insightful, hilarious, and warm-hearted – everything I was taught gay people weren’t.

But that didn’t stop me from using homophobic epithets around her. Still a bigoted 19-year-old, I routinely shuttled out the words “fag,” “homo,” and “don’t be so gay” without ever comprehending that each time she heard those words, I was insulting her. Belittling her. Hurting her. Insinuating she was less of a person.

Much to my friends’ chagrin and ridicule, I soon joined the Friends of the LGBT at my college to support her and others I’d met that inspired me. Truth be told, I was one of very few straight men involved – if not the only one. But, despite all the harassment, insinuations, and name-calling I endured, I knew it paled in comparison to what gay people had to endure. For the first time in my life I knew that I was doing the difficult thing, but I was also doing the right thing.

It’s now time to do the same to education. Why? Because in education, being gay has yet to become fully acceptable.

I rapidly learned this in my very first student-teacher placement. One day, while these 7th grade students were leaving for lunch, one young man lingered behind, to hesitating state, “Mr. Miller, I need to tell you something – I think I’m gay.”

I stood there with my jaw agape, scrambling with words to help and guide this young man. We shared a conversation as we walked to lunch together, but before we diverted our paths, I left him with some parting words:

“Joe, I think you’re a great kid. If you want to chat more about this later, I’m here for you – and so are the other people here at this school.”

Joe was one of many students I’d meet throughout my early career who is gay. Many teachers have met students who have shared their story with them. Why? Today’s classroom is much different from that Senior Sendoff classroom in which I sat in 2001.

Despite this difference, probably the greatest concern for me as a professional relates to our gay colleagues. Many schools have a gay teacher, as 2% (or 6+ million people) of America’s demographic identify themselves as members of the LGBT community. Still, not are all completely embraced by their community – yet.

I currently teach with several gay teachers at my school, and not only are they some of our best teachers, they’re some of my greatest friends. However, these teachers are constantly placed in the predicament of answering a student’s question, “Mr. So-And-So, are you gay?” Why? Because, depending on your state and school board, answering that question honestly can result in a gay teacher’s termination. That is incredibly wrong.

Teachers – think of how far we’ve come in the civil rights movement. Don’t get me wrong – there is still much growth to be made, but this country has changed drastically since the 1960s. Most of that can be attributed to three things – the fact that the majority (whites) began to take a stand for the minority (blacks), the desegregation of schools, and the mutual understanding that came with an open dialogue of our differences.

These same principles can be used to make for a gay rights movement. Much of that begins and ends in the classroom.

But for their sake, the time to take a stand is now. There are so many great young men and women who, in finding themselves, find that they are attracted to somebody of the same sex. There are also many teachers who are wired the same way. They deserve to be welcome to a classroom where the words “homo,” “fag,” and “gay” are treated the same way as any four-letter word or that vile N-word.

Why? Because homosexuality is not a choice. It is natural.

Any dissenter of this claim can also hearken back to their high school graduating class; they should ask themselves how surprised they were to learn about that one classmates who is gay. Nobody in my class was surprised to learn that young lady was gay. Dissenters probably aren’t, either.

In my social studies class, I teach of an America that was founded upon a principle that we accept all people regardless of creed and color – in 2014, it’s time to add sexual orientation to that list. It’s time for educators to support gay rights. We owe it to our LGBT students and colleagues.[/fusion_builder_column][/fusion_builder_row][/fusion_builder_container]

Reading Strategies - By Kids, For Kids 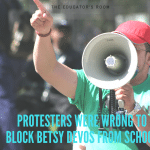 Protesters Were Wrong to Block Betsy DeVos From School
« Teachers on Trial: Vergara v. CA
What Do the Green Shoe Laces Mean in Educational Reform? »