Like most college graduates in 2005, I was just glad to have a job in education. Better yet that I was hired at my Alma mater school, nestled in the coal region of Pennsylvania. Here I knew the teachers, the culture, and the community. But I still remember a conversation my uncle, who just retired from the military, had with me that changed the direction of my life. It was about my career - namely, my pay.

What followed was a conversation that changed my life. He pointed out how great teachers were for kids. How they changed him. And me. How we educators put communities on our shoulders and lift them up. How, despite being "collectively wrong" in the eyes of the public, individually, there's no greater person that can build a right foundation for a kid. Success began with a great education and with great teachers. He also pointed out how well-educated we were and yet undervalued and underappreciated.

The fact that I worked so hard in college and in the community to land a job that paid about $15 an hour he said, "was insane."

"You need to make more money," he told me. And so I went on the job hunt, eventually making my way to the Greater Harrisburg area, where there was more development, economic activity, and a higher salary.

This type of exodus doesn't ring true for many fellow educators in West Virginia. They don't have greener pastures to go to when the state is attached to a statewide wage freeze (since 2014) and their insurance plan, the Public Employee Insurance Agency (PEIA), has been the can the legislature continues to kick down the road. Matter-of-fact, the brave educators in West Virginia don't have the legal standing to go on strike. It's technically illegal. But as fellow TER writer Krissa Mayhew shared earlier this week, they went ahead and did it anyway.

In a state where the Latin Montani semper liberi means "Mountaineers are always free." Here's a state that's always looked out for the little guy. During the Civil War, the western part of the state was one of the few areas of the entire United States to have some moxie and do something bold, leaving Virginia and joining the Union. This was because they thought slavery and black servitude was wrong, a declaration most of the Union states fully subscribe to yet. They elected a legislature that had the boldness to do the right thing, leaving any notion of the Confederacy.

Now 157 years later, we're looking at teachers who are starting off with salaries at $30,000 and averaging $43,000 annually, ranking 48th in the nation. With cost of living adjustments, the unknown increases of the PEIA, and the increasing demands in the classrooms, these teachers united - all 55 counties - and decided "enough is enough." They grabbed the mic, spoke into it and dropped it in the lap of the elected officials who have a lot less moxie than the first ones leading the state.

Now on their second week on strike and still packing lunches for needy kids, Oklahoma is considering joining their fellow West Virginia teachers. As The Washington Post cites in their article comparing teacher salaries, while both Oklahoma and West Virginia have lower costs of living, they both rank among the 5 lowest in the nation. And the teachers are fed up, so Oklahoma might be next.

Let's not pretend this news is coming out of left field. Shawn Sheehan, the 2017 Oklahoma Teacher of the Year, left the state after winning the top award, laying out the economic argument for how underpaid and undervalued he was in the Okie State, and that he was nearly doubling his salary by moving south to teach in Texas. It's so bad there, 2 of the last 3 State Teachers of the Year have left the classroom to do something else. They, like me, have found greener pastures.

Next up might be the Carolinas, Dakotas, or Tennessee, who all rank towards the bottom of nationwide pay. All who have new teachers who are expected to make ends meet with about $30,000 a year.

Which really comes to a simple philosophical argument that never seems to go away - are teachers paid enough? If one thinks educators are mere average citizens who work two-thirds of the year and punch in and punch out, they're going to think we're overpaid. One of my very good friends is in the camp, and he thinks any semblance of a teacher's union promoting anything beyond what I currently make is asinine. Another very good friends, who're in the same political party, said he wished he could double teachers' salary in all 50 states to "finally give them what they, the most important job in the world, deserve."

I've met some incredibly amazing educators in my career and in my travels. It doesn't matter where they're from; they'll only answer "yes" to one of those "averages." That needs to stop today, and that's why this teacher, who used to scrape by on $30,000 a year, doesn't see how he'd support his family of 3 with one on the way. That's why I support both West Virginia and Oklahoma's efforts to promote sound and realistic efforts to change that. 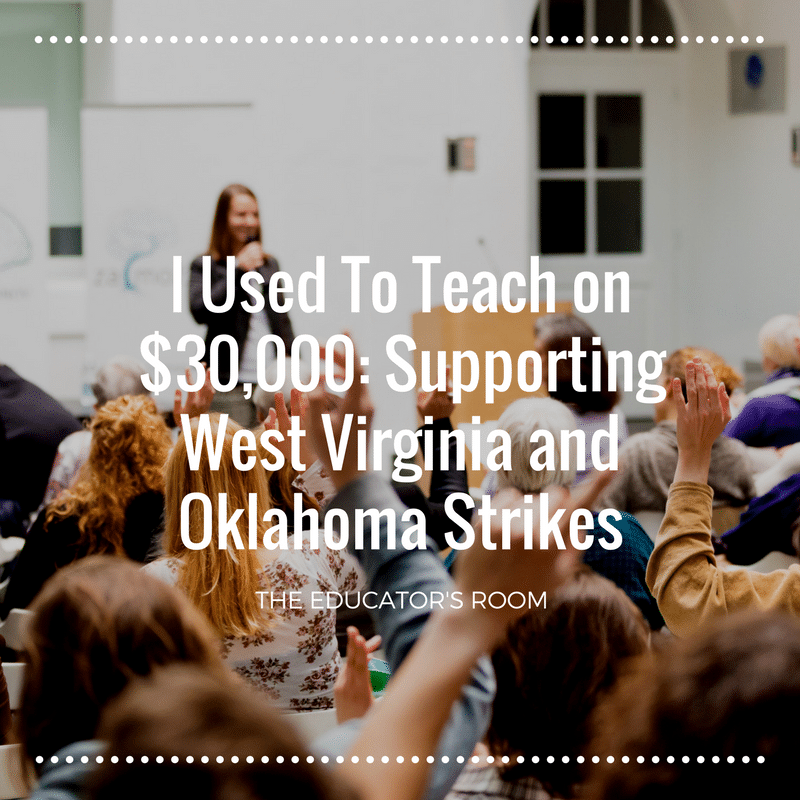 Taking the Anxiety Out of Student Placement in Special Education
« A New Teacher's Perspective: Ranting, Destressing, and Teacher Health
Do You Want Me To Carry a Gun? Teaching in a Time of Lockdowns... »