What if we could sit at the feet of Socrates and ask him philosophical questions?  What if we could have a conversation about agricultural design with Thomas Jefferson, or about the rule of law with John Adams?  What if we could sit in a room and listen to Frederick Douglass explain his experiences and make his arguments about equality, or hear Rachel Carson speak about the dangers we are putting our own environment in, and how that will affect our health?  What becomes wonderfully evident in a Social Studies class (and really, any class) is that we can do all of these through the use of Primary Documents.

One of the biggest challenges in a Social Studies classroom is the bland nature of history and government textbooks.  These secondary sources can make it difficult to get kids interested in any of the thousands of amazing stories available throughout American and World History.   Because of this, many Social Studies teachers have given up the use of text books altogether.  Using primary documents can be a bit more time consuming in the planning process, but the end result is a much richer use of historic material and the possibility of deeper understanding for the students.  Another advantage of using primary documents in the classroom is their compatibility with Common Core Standards.  Common Core does not directly address Social Studies, but as has been discussed many times in this publication, the key to Common Core is applying it across the curriculum.  The skill goals for students are highly accessible through the use of primary documents: relevant, non-fiction reading and analysis; writing evidence-based arguments using a text; understanding how events are linked (the big picture); and critical thinking about concepts.

Sometimes I love to use the well-known documents.  Everyone thinks they know what the Declaration of Independence says.  But how many students have actually been given the chance to spend quality time dissecting it and analyzing it?  How many have read it like a “Dear John” break up letter with Britain (yep, we’ve done that!).  How many have gone through what I call Jefferson’s “List of Horribles” about King George and really thought through the complaints?  Did they realize the Declaration was in writ format: it’s a 5-paragraph essay!  It’s crafted in the same exact style that their Common Core standards want them to learn and be comfortable with: an Introduction, a body of arguments (with evidence) and a bold conclusion.  Becoming intimate with the actual words of an American leader – words which were signed on to by representatives of all the colonies – has a deeper reach for students than simply learning in a brief paragraph in a textbook that it happened.  It also allows them the opportunity to make the Revolutionary Era relevant to their own lives by translating Jefferson’s essay into an essay of their own about liberation.

Well known documents are valuable in that we can take the opportunity to see what we thought was familiar in a new, fascinating light.  On the other hand, using primary documents that are not so well known give voice to the real people of history (and contemporary times) that often get left out of textbooks.  One exercise I have done for years with my students is called “Missing Voices at the Constitutional Convention,” and is a deeper exercise into the reading, analysis of, and response to primary documents.  The goal is both an exercise in perspective and in analysis skills.  The students consider, through the reading and analysis of primary documents, the perspectives of people who were not included at the Constitutional Convention, and how that might have affected its outcome.

To begin, the students are given a packet of short documents from four different groups of people: Women, Native Americans, African Americans and Working People/Farmers.  All the pieces come from the same early Federal era of the Constitutional Convention and include letters, stories, news editorials, speeches and other first hand accounts of their life experiences.  Students can read the words of a woman who chose to leave her abusive husband and take shelter with the Quakers, and they can read Abigail Adams’ letters to her husband imploring consideration of women’s rights at the Constitutional Convention.  Or they can read the public petition for freedom of slaves in Thompson, MA in 1773, or the famous “In What single Circumstances are we Different from the Rest of Mankind?” essay from 1780:

Can it be contended that a difference of color alone can constitute a difference of species? –If not, in what single circumstance are we different from the rest of mankind? What variety is there in our organization? What imperfection in the faculties of our minds? Has not a Negro eyes? Has not a Negro hands, organs, dimensions, senses, affections, passions? Fed with the same food; hurt with the same weapons; subject to the same diseases; healed by the same means; warmed and cooled by the same summer and winter as a white man? If you prick us, do we not bleed?  …are we not entitled to all the same rights as other men?

It can be a revelation to many students that slaves and former slaves were advocating for freedom and equality LONG before the textbooks bring up the issue in their Civil War chapters.  In other documents, students can read direct eyewitness accounts of the Whiskey Rebellion, or a letter from a merchant in a Pennsylvania town about how difficult work is.  There are also the voices of the Native Americans- letters to the English leadership about treaties broken, excerpts of the Iroquois Constitution, speeches by chiefs describing the theft of their land.  All of these primary sources give vivid access to a time that can be very hard for students to grasp.  Learning to step into the shoes of those every day people and their experiences can also open doors to exercising that very important skill of writing with perspective.  I ask students to take on the role of someone in one of these groups, and write a brief speech they would have given to the Constitutional Convention if they’d had the chance to do so.  Later, when the students learn the Constitution itself, they have a deeper understanding of the culture and values that went into its crafting, as well as the issues that were left out of it.

Primary documents are incredibly fun and useful in Global Studies or World History, in Sociology and in Economics.  The direct words of the people involved in the events students learn about can give a new relevance to those events.  There are numerous sources for primary documents – many books have been published that contain the actual documents. The internet also has lots of primary document sources, including the Supreme Court and the Library of Congress websites.

They are out there.  The voices of the actual every-day people and great names of history who shaped the very subjects that our students study.  Students can learn how to read for understanding and for perspective; important skills that cross curriculum boundaries.  Giving life to history or government or literature or science is not so hard once we make the effort to find those original voices.   In the end, it also teaches our students that their voices are important too. 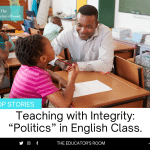 Teaching with Integrity: “Politics” in English Class.
« Clearly, A Conversation About Gun Control in the United States Has to Happen
School Shootings From The Eyes of a Student and as a Teacher »