There are a thousand reasons why I worry about my students

I had a challenging group this past school year. Generally, my "teacher radar" runs in the background on low intensity-ready to alert me as needed. Off-task behavior or potential disruptions elicit a ping. But with this group, I had to be constantly aware of everything: proximity between frequently warring personalities, the facial tells of emotions triggered and about to erupt, and a larger than the usual number of students who seemed to have little regard for those around them or for being their best selves. The social-emotional state of students is a growing concern in general, but it's no exaggeration to say I had a thousand reasons to worry about this class.

This is usually ancillary to my decisions as a teacher

Most of those "pings" I described are the child-development stuff;  that's the back-side of the report card (e.g. social, emotional, character education...). You know, coddled too much, not cuddled enough, clearly unfamiliar with laps and books at bedtime (but all too familiar with rated R past bedtime). You see these kids out in the store or out at restaurants. They are pouty, whiny, needy, ask "why" when told to do something or even say "I don't want to."

That stuff only draws increased attention and increased concern when it becomes chronic, too intense, or disruptive. After all, in the elementary grades, you're always going to have a few.  I get it. I have spent a couple of decades now doing it, so I really get it, but those decades have revealed a worsening trend. Kids definitely weren't like this when I was that age, but they also weren't like this just twenty years ago! More kids have horrible crazy crap going on in their lives.

Let's start with the fact that, like it or not, teachers know stuff about the families of students. Often it's stuff those teachers wish they didn't know.  I know who isn't allowed access to their own children, and I know who has none because they are in jail. I know who got out of jail just in time for Christmas and then was arrested for having heroin, lots of cash, and a gun in their car before kids even came back to school from break. I see bruises, I detect a lack of sleep, high anxiety, and I know what fight-or-flight response looks like. I smell the pot during the parent-teacher conference.

This is in what is called a “regular education setting”

But this is far from  “regular,” and we shouldn't allow it to be. I see so many kids who are “trauma-informed” as the fancy folk say. Neglected, abused, broken…I sometimes think. Saying goodbye for summer just makes me wonder what kind of summer waits for some of them.

So when the buses were lined up for the last minutes of the last day, and students were loaded down with report cards and whatever end-days projects, left-behind clothes, and cubby-clutter could be crammed into their backpacks, I stood at the head of the goodbyes line. The multiple hugs, fist bumps and (for the few who dared): rock-scissors-paper. They know I am the champ, almost never lose, and they're looking at one more shot at the man before summer. Suddenly, from my left, Chucky (pseudonym) latches on. No waiting his turn, no standing in line, just "bam," arms around my waist hugging tight.

So I lean over and hug

I tell him it's okay, and I tell him I'll see him in a week when he comes back for summer school. After a few moments, he heads off to his bus. I return to the rituals and "bam," Chucky is back, still crying. I calm him down, tell him how much he has grown and how I'm impressed by how smart I now KNOW he is ("No excuses now, buddy!").

Unbelievable how the students you so badly need a break from end up being the ones you'd take home if you could. Yeah, I worry, but that's why I keep going back. If not me, then who, right? I'll have a week to myself, and then it's back to summer school, and Chucky will be there, along with a dozen others I worry about. 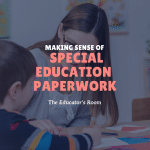 Making Sense of Special Education Paperwork: 3 Systems That Save Me Each and Every Time

Teaching With Minecraft EDU
« Teachers - Your Impact on Students is Greater Than You Know!
The Summer Migration: Starting a New Teaching Job »