“Show me a hero and I’ll write you a tragedy.” – F. Scott Fitzgerald

I’m not a hero. Neither are my colleagues.

And here is the really important thing to note: no one should expect us to be.

And here is the really, really important thing: the success and failure of modern American education should not hinge on the corps of American teachers rising to the heights of heroic effort, action, or outcome.

This is not a statement of humility or a stealth declaration of faux modesty. It is a fact. This is not to suggest that teachers can’t uplift students by inspiring their hearts and filling their minds. Nor is this to diminish the romanticism of those, like myself, who have seen for themselves how powerful teachers can supplant the forces of violence, poverty, and neglect that frequently plague the early lives of young Americans.

This is not to suggest that teachers can’t uplift students by inspiring their hearts and filling their minds. Click To Tweet

As a matter of public policy, however, improving education is not analogous to increasing levels of worker productivity in a factory or improving the performance of athletes in the arena of competition. We are living through an era that steadfastly refuses to have the truly difficult conversations about education. Why? Because those conversations are not about Chrome Books, a rigorous test-taking regimen, or teacher credentialing requirements. They are not about which books to read or how much professional development time needs to be set aside for staff members.

The conversations that we should be having would be difficult for everyone, no matter where one falls on the political spectrum. Conservatives must admit that the American ideal of robust social mobility is no longer as vibrant as it once was, that the largest predictor of poverty is if one’s parents are poor, that minority children in this country are less likely to attend high-performing schools, less likely to have high-quality health care, less likely to have books in the home, and more likely to be exposed to the deleterious effects of pandemic violence and  omnipresent drugs. Moreover, financing schools through local tax bases perpetuates gaps in educational opportunities. These realities intrude on conservative orthodoxy by challenging notions of what equity should look like in an educational system.

Liberals, on the other hand, would do well to acknowledge that the institutions that socialize young people, that domesticate their raw passions and inculcate sets of behaviors and values that translate into success no matter one’s circumstance, are rarely the province of social engineering. More funding, new entitlements, or engendering a strident sense of victimhood in the young is not a replacement for the robust and ameliorating influences of parents, mentors, and community. The brutal reality is most classroom success and failure is presaged by the influences and relationships (or lack thereof) that exist before a student enters the classroom.  Furthermore, everyone in the education universe knows that the most at-risk students rarely have the best and most experienced teachers. The Marshall Plan-New Deal-Apollo Mission of our time should take place in our schools through a stentorian commitment to match the best teachers with the most at-risk students. But this will never happen as long as politicians and school boards refuse to incentivize excellence by denying any component of performance in one’s salary.

You see, it is simply easier to ask teachers to be heroes.

It is easier to ask teachers to fill in the gaps of opportunity perpetrated by historic poverty or the colossal disadvantage incurred by those who grow up without the millions of small but significant moments of love that pass between a child and his/her parent. Teachers of the modern era know that it is laudable and valiant to act in loco parentis, but it is not fair to expect the edifice of education to stand aloft the shoulders of heroic teachers.

We need to stop pretending that asking schools to perform better is tantamount to asking teachers to teach better. Click To Tweet

We need to stop pretending that asking schools to perform better is tantamount to asking teachers to teach better. A friend of mine who switched school sites a few years ago sardonically noted that when he went from the impoverished school to the affluent one, his teaching seemed to have vastly improved over the course of a single summer. His acerbic observation speaks to the difficult reality that our nation and culture is suffering from an intensive episode of mass delusion, one that refuses to ask our culture to be less obsessed with celebrities, less violent, less sexualized, and less celebratory of wealth. We don’t want to acknowledge that there are, in fact, historic structures of disadvantage for millions of our children nor do we want to recognize that overcoming these structures is more a function of individual virtue, resilience, and grit than it is expanding our national menu of grievances and gripes.

The conversations we should have ought to resemble a philosophy seminar more than a political debate. Click To Tweet

These are difficult truths. There are no easy answers because, at the end of the day, the elusive dream of improved schools is not about funding formulas or augmenting credential qualifications—it’s about producing better human beings.  The profound paradox of the modern age is a simultaneous reliance on a political science that celebrates individual freedom while ignoring (or at least failing to cultivate) the very habits that allow this freedom to be used in a meaningful manner. Freedom without character is chaos, liberty without virtue quickly descends into licentiousness.

America was founded in juxtaposition to the European idea that human beings are exclusively creatures of contingency, products of their environment and almost wholly shaped by the milieu of their time. Americans, on the other hand, are supposed to embrace an ethic of an agency, believing that rational choice—and thus progress—is possible if education can take root in its citizenry. The great irony, perhaps tragedy, of making our teachers into heroes is that it is a tacit acknowledgment that the environment of our young people, the condition of their lives before they set foot in a school, stunts their ability to become truly educated once they get there. A truly towering teacher-hero can compensate for these deficiencies and yet, most of this time for 99% of us, this is a fool’s errand.

The conversation we should be having is the same conversation philosophers have pondered in every era, the question of how to refine what is raw in our children, how to quell what is problematic to the community—in essence, how do we improve human beings? How do we ready them for society? Schools and teachers play an integral role, but it should not be a starring one. Yes, there is the occasional teacher who is a hero, who can topple mountains of dysfunction and lead the occasional student to the promised land of a good and substantial life.

But that’s not the job of a teacher.

Teachers are teachers, not saviors. Stop expecting anything different. 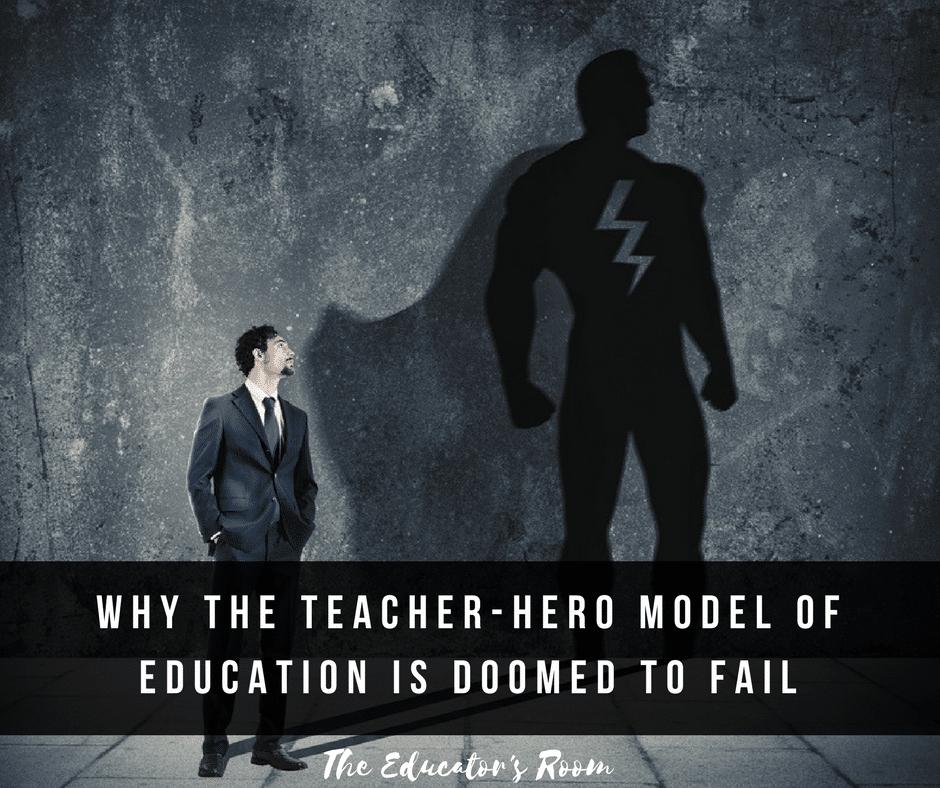 Part II: Why a Teacher Cannot have a Normal Life....

Breaking The Cycle of Disrespect in the Classroom
« This HS Senior Was Accepted to 149 Colleges. That’s a Problem.
The New Teacher Chronicles: The Benefits of Cross-Curricular Education »