Teachers complain a lot and I mean A LOT. Trust me I would know.

My parents were teachers who complained during meals. My best friends are teachers who sprinkle more complaints over their cafeteria lunch than salt and pepper. We gripe about administration. We bemoan the manners of our students. We open our arms to the universe a la an Old Testament prophet and cry out at the frivolousness of the latest pedagogic fad that will darken our doors yet soon be forgotten before it is ever fully implemented. Our caterwauling rides a daily carousel of topics ranging from the mundane (why doesn’t the heat work…it is January after all!) to the profoundly consequential (how can we educate students who herald from violent and unstable homes?).

We would like to make more money and be better appreciated by a public that is quick to point a finger and indict the entire teaching profession. We want policy makers to spend some time in the classroom. We want administrators who teach more than five minutes before transitioning into administration. We have strong opinions and we aren’t afraid to voice them. We eschew change for the sake of change and feel our plight is misunderstood by the masses.

Sometimes, I painfully admit, we come off as whiners more than paladins of professionalism.

But despite this propensity to grumble, gripe, and protest, know this about the modern corps of American teachers: they are the only ones who can save this country!

I have been slow to embrace this grandiose pronouncement; but I am now fully convinced. Here’s why:

No matter one’s politics or policy preferences, for those of us who sit on the front lines of America’s educational system it is increasingly obvious that many of the variables that bestow the characteristics of a promising life—challenging schools, vigilant and involved parents, safe neighborhoods, nutritious meals, and quality health care—have become the markers of privilege instead of a foundation of basic opportunity. At no time in American history has the link between parental income and academic success been stronger than it is today.

I have come to the sad but steady conclusion that no amount of government spending or social service largesse will remedy these disadvantages nor am I convinced that parents will suddenly begin the hard work of modeling better behavior or deliver more opportunities to their progeny. The late New York Senator Daniel Patrick Moynihan once observed that, "The central conservative truth is that it is culture, not politics, that determines the success of a society. The central liberal truth is that politics can change a culture and save it from itself." Thus, everybody knows that it is an advantage to have two parents in the household and yet the divorce rate is stubbornly stable and the rate of children born to unwedded mothers continues to rise. Everybody also acknowledges that antiquated funding matrices predicated on local tax bases yields a paradigm in which the United States is one of only three counties in the world that spends more on its wealthy students than on its impoverished.

So who is left to facilitate the most American of aspirations—the hope of robust social mobility—to student populations that are the least likely to climb the ladder of this mobility? How can citizens born to scarce advantage through no fault of their own fully assume the mantle of American opportunity?

If traditional safety nets and parental interventions cannot reverse the tendency towards plutocracy, how can we rescue American civil society from the destructive conclusion that American success is more aristocratic than meritorious?

Schools are where many students receive two or more meals a day.

Schools are where students are given structure, where rules are created and enforced, where the trappings of responsible citizenship are modeled and celebrated.

Teachers do simply teach curriculum and course content, they transform their classrooms into slingshots towards a better, fuller life by practicing the traits of hard work, critical thought, and knowledge retention.

Teachers intervene when they see tears running down their students’ cheeks. Teachers pause when they observe heartbreak. They stoke interest when they encounter genuine passion. And they never view a student for what they are, only what they can be when nurtured to the greatest extent possible.

Many will disagree about how to prepare teachers to save this nation. Do we institute merit pay and a form of hazard pay to incentivize experienced teachers to instruct to the most needy students? Do we abandon the regimen of traditional teacher recruitment from state colleges and convince students from the most elite colleges that the calling of their nation should not take them to a boardroom or a courtroom, but instead, a classroom? Do we need to confront the mind-boggling and baffling reality that America spends more money on its affluent students than its impoverished ones and thus must create new funding formulas nationwide? Do we need testing and accountability or support and innovation?

Wherever you stand on these controversies, it does not obscure the fundamental truth that the classroom serves as both a laboratory and an incubation area for the aspirations of a democratic citizenry.

My conclusion is not that teachers will succeed in saving this nation, merely that if it is going to be done it will be achieved by the heroics of the everyday American school teacher.

What Am I Thankful For? A Damn Good Public Education

Charter Schools Have Lost Their Way 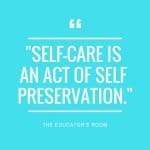 The Learning Academy..What is it? Why Do We Need It?
« Broken Beauties—the Art of Brokenness
New Teacher Support Systems: They Need Them! »