A Canary in the Coal Mine: The Truth We Need to Remember Post-Pandemic About Virtual Schooling | The Educators Room

Education these days feels a bit like science fiction, doesn’t it?

When I think of my students and my own daughter learning virtually, I wonder if anyone else is remembering Keanu Reeves’ character Neo in The Matrix? If you aren’t much into the science fiction genre, just picture a man plugged into a computer while a learning program loads. He takes off the headset, looks to the audience, and declares:

I suppose it wasn’t so hard to imagine in the early 2000s that plugging ourselves into a computer might replace, even make it more efficient, learning in brick and mortar schools. Certainly, the rise of online classes for adults has taken off across colleges and for training adults.

But what about our K-12 students?

When this pandemic is over, does virtual learning become an alternative experience as it has become in college? What takeaways do we consider after we no longer have to plug our children in? Click To Tweet

For me, the answer is clear! Virtual programs are simply not as effective for children as physical classrooms. Even before the trauma I began to see in my students from the intense isolation, it’s something educators have known for years!

The Literal Truth of Virtual Learning

As it so happens, virtual school has already been tried, and it wasn’t exactly a Hollywood moment. Despite corporations using public dollars to add glitz, that record is more like a horror movie than science fiction.

In 2009, as Race To The Top encouraged large urban districts to allow charters and privatization of more of their schools, virtual schools became cash cows. Hundreds of millions of dollars poured into this new concept of placing students in front of computer screens, in places like San Jose, Houston, Washington DC, and right here in California. Although overhead for these charters was far less than brick and mortar schools, the public dollars that came with student enrollment flowed in equal proportions creating opportunities galore for investors like Murdock, Pearson, and Houghton Mifflin.  Districts began to give oversight, in some cases completely, to corporations running schools, leading to criminal charges, payouts for private jets, and even FBI raids.

In her book, Reign of Error,  Dr. Diane Ravitch explains the inability of virtual programs to show even comparative scores to brick and mortar programs, despite their heavy reliance on a curriculum designed to do that very thing. But that’s far from the only problem. Drop-out rates soared in these schools, and when disenfranchised families and students returned to public schools, often their funds stayed with the virtual school corporations leaving districts scrambling. Ravitch explains how in Colorado in one year alone, 100 million dollars was given to virtual schools. The result? Half of those who enrolled quit to return to other schools, students were packed in classes in some cases as many as 250/1 for high school and 75/1 for elementary, and high school graduation plummeted.

In 2011, the New York Times found that these findings were the norm in every state. With only ⅓ of its schools meeting AYP, virtual programs like K12 aggressively targeted poorer students, making large profits in the process, and not coming close to delivering sound instruction of any kind.

Parents, The Canary In The Coal Mine

And now I see it as a parent in my own child. And I’m not alone. Parents are communicating to us, to anyone who will listen, that virtual learning does not work in a society where most families need two income earners just to make ends meet. It’s the same message given to us about programs like K12 a decade ago!

While my wife and I do our jobs virtually, my own fifth-grade daughter needs constant help with the smallest of issues: from staying engaged in a way that doesn’t interest her to technology hassles a mile long. At times, I feel like a canary in the coal mine, wanting to send the alarm that if it doesn't work here in the home of a teacher, maybe it's having the same effects elsewhere. I’m far from alone as various blogs, and articles around the country reveal further problems with children’s social, emotional, and academic deprivations. Just listening to what the executives of Silicon Valley say about their own children’s education, should give us pause.  Are we ready to listen now?

The real science fiction to me is the idea that children will suddenly jump up out of their seats there at your kitchen table and declare “I know fractions?” or “Hey Dad, guess what, I’m on my way to being an engineer!”

The fact that our students are not learning as much or with the same quality and fervor as they would back in our classrooms is an important takeaway from this pandemic, one we missed a decade ago.

And it’s one we better get right when 2020 is over because our children are not guinea pigs, this isn’t The Matrix, nor should our schools be a cash cow for investors.

The canaries are singing. When the dust settles, I hope we listen. 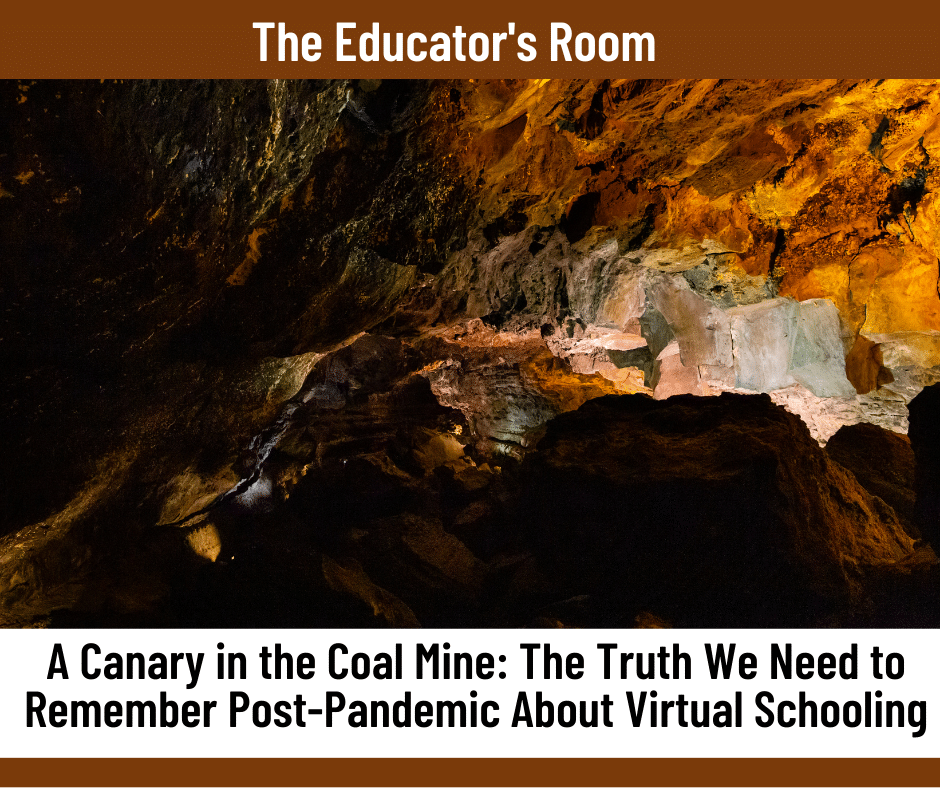 « 2020: Reflections of an Educator Working Through a Pandemic
The Late Work Policy Debate in the Midst of COVID-19 »