As a teacher and American citizen, it is difficult to discern what values we stand for as a nation today. It seems that our government has blurred the lines between right and wrong, truth and falsehood, equality and discrimination, and honesty and scandal. In the pendulum swing from the “post-racial” Obama years to the quasi-authoritarian regime of Donald Trump, democratic institutions and cultural values that Americans took for granted are up for grabs in the minds of the citizenry. The shifting sands of what is right and wrong in American politics and its effect on American culture also has had an impact on the intellectual discourse in America’s classrooms, forcing teachers at all levels to ask whether their own personal values supersede their loyalty to their employer. Teachers of social studies especially have had to repress their longstanding views on what America’s role in the world should be as a moral leader so that they do not risk criticism or dismissal.

The shifting sands of what is right and wrong in American politics and its effect on American culture also has had an impact on the intellectual discourse in America’s classrooms, forcing teachers at all levels to ask whether their own personal… Click To Tweet

It is right to ask, “what is a value?” According to the National Association of Secondary School Principals, values are

….those inner standards from which you receive the motivation to act as you do and by which you judge behavior (both yours and others). Values signify what is important and worthwhile. They serve as the basis for moral codes and ethical reflection. Individuals have their own values based on many aspects including family, religion, peers, culture, race, social background, gender, etc. Values guide individuals, professions, communities, and institutions.  (From Character Plus, www.characterplus.org, originally from License to Lead Copyright © 1996, National Association of Secondary School Principals).

Values are freely chosen ideals that come from a variety of options. Values are deeply held convictions that reflect foundational concepts that are important to the individual as well as the community. The United States is a diverse community with regions, states, ethnicities, and special interest groups, but all of these factions are united by their common history and a set of values that, up until now, unified them as a people.

While these values are open to some discussion and debate, they can all be found somewhere on a cultural continuum that most Americans can agree with. In the most recent electoral cycle, the contradictory nature of the cultural clash between the ever-widening gap between the two ends of the continuum is being laid bare. The question for teachers: how to bridge the gap for all of their students.

In recent days, celebrities have used social media and the cable networks to throw racist and misogynistic epithets at each other. Roseanne Barr lost her wildly popular TV show to a racist tweet, which President Donald Trump did not call out or criticize. Samantha Bee criticized the president’s daughter, Ivanka, for failing to stand up for a humane immigration policy by calling her an offensive name relating to her status as a woman. Bee did not lose her show, but she did apologize by saying she “had crossed a line.” The problem with both scenarios is that each entertainer had the right under the First Amendment to say what they did, but that did not make it the right thing to do. Both utterances were vile and probably could not be discussed in the classroom, but one value that seemed to have died as a result of the entire exchange was that of civility. Political correctness exists because there are boundaries for self-expression that bring about consequences if those boundaries are violated. Unless political correctness evolves into censorship, it exists for a reason: because it's correct.

Since the civil rights movement of the 1950s and 1960s, the United States has become a nation that claims to value the ideals of equality and acceptance of different racial, ethnic, and national groups. These concepts are found in such cherished documents as the Declaration of Independence, the Constitution, and the Bill of Rights. The Fourteenth Amendment calls on state governments to maintain “equal protection of the law”. In recent years, the demographic nature of the American electorate has shifted to the point where the United States will become a “minority majority” nation where a majority of its population can be counted as people of color or non-white citizens.

The shift in ethnic makeup in the US has caused what some have called a “white backlash” in the election of Donald Trump, whose speeches and policies can be characterized as both racist and anti-immigrant, even xenophobic. For many working-class and middle-class white voters in America, Donald Trump offered a vision that would run counter to the liberal, multicultural agenda of Barack Obama. In their eyes, America’s first black president alienated them and left them behind as minorities and immigrants received free handouts from the government in the form of what they saw as Obamacare health insurance and alleged fraud and abuse in the welfare system.

In the classroom, teachers had to decide if they would be willing to support the idea of diversity in American society, or if they were willing to uncover the racist dog-whistle many teachers believed was inherent in the moniker “make America great again. For many liberals, the phrase really meant “make America hate again.” Teachers were criticized and disciplined for criticizing the President’s white nationalist tendencies.

As Peter Kaufman pointed out in his blog post just after the president’s inauguration, schools are social institutions with mission statements that reflect the ideals of diversity, acceptance, and an egalitarian atmosphere where all children can learn and grow without regard to race, class, or another status. Even though they strive to realize these goals, they must be careful not to indoctrinate students toward one political ideology or against a political figure. Even though the president of the United States has exhibited behaviors that are inconsistent with our national values, teachers, schools, and districts must refrain from openly criticizing or attacking the president.

America has always prided itself on its “rugged individualism.” The capitalist system claims to be guided by enlightened self-interest. The fact that a businessman has been placed by a large part of the electorate at the top of the American political system reflects the importance of the view of the wealthy as deserving of their wealth and positions of power in the United States. The “1%” that controls 40% of the wealth in the US isn’t vilified or held accountable for America’s social ills. America’s economic policies continue to move the nation towards laissez-faire capitalism, with our opportunity cost being the environmental and economic well-being of the nation’s natural and human resources.

It seems that we value the welfare of our national community with increasing disregard. How we treat the underclass, the outcast, the stranger, and those not in the majority is reflected in our national policies, and those policies are increasingly individualistic.  Even as our population expresses its value for religious beliefs, including a belief in God, our national discourse shows those beliefs to be empty words without implementation in reality. Teachers may ask the question: “should our Judeo-Christian values of helping our fellow human beings be reflected in domestic economic policy?” All too often, this call for consideration of the needs of our national community is seen as some scary move toward socialism or communism in disguise. We must ask ourselves if we are willing to live with our own hypocrisy.

These issues arise when discussing the role of government in society. The comparative disregard for the nation’s poor and unemployed during the Great Depression is a symbolic expression of these political values as they are rooted in our confessions of faith. We claim to be a Christian nation, but the ideals of that faith - those of humility, non-violence, and respect for the poor and downtrodden - are sorely lacking in our academic discourse as well as in our economic policies. These values seem to find their way to the back of the classroom, if not placed out in the hallway. We seem to support unbridled political and economic power, ethnocentrism in an “America First” foreign policy, and inhumane practices in dealing with immigrant families. It will be up to teachers to lead the way in bringing back “values education” so that all members of our community are affirmed rather than engaging in the politics of division. 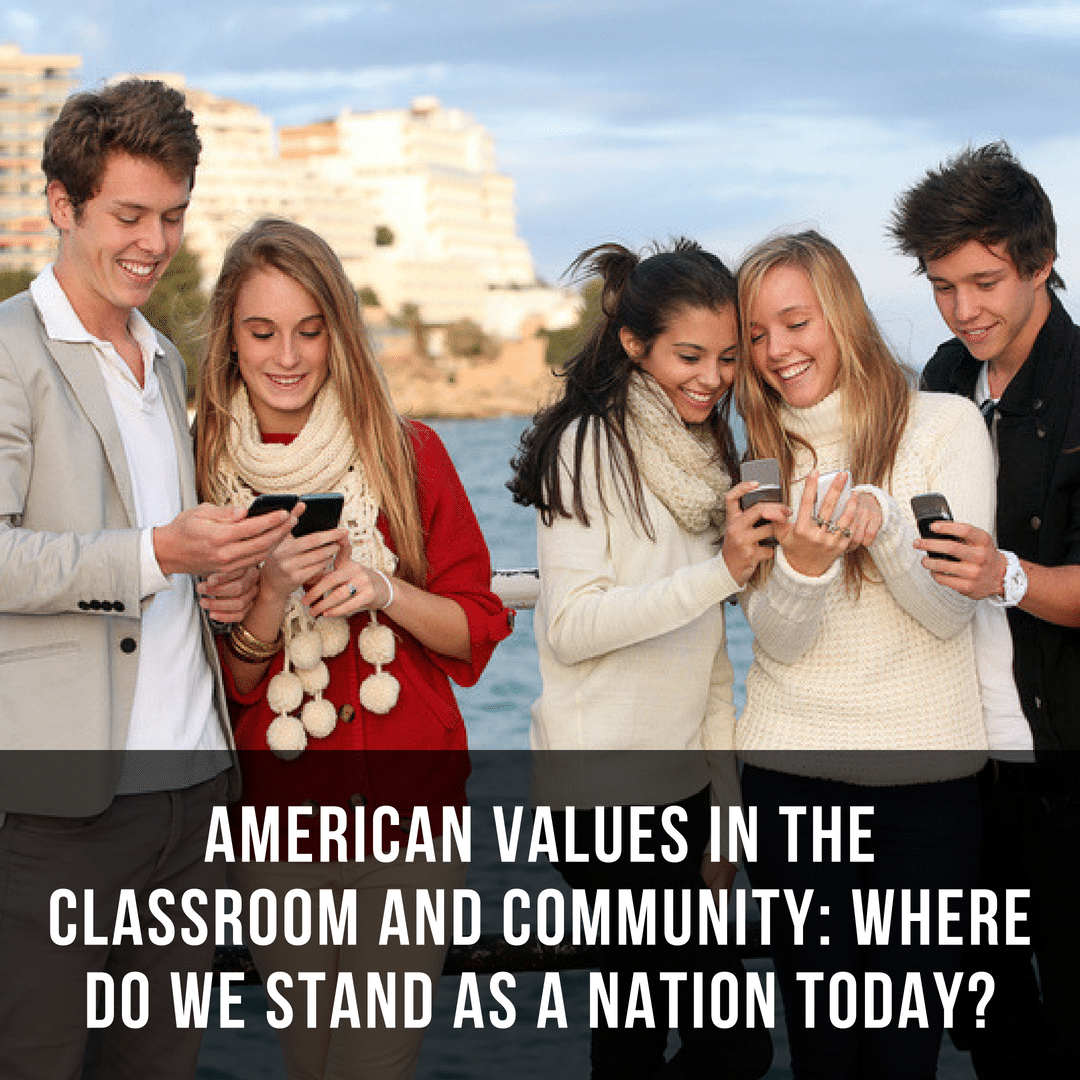 Equity in Action: Mitigating Unconscious Bias In the Classroom
« Maintaining a Growth Mindset in a "Gotcha" Environment
I Wish My Teacher Knew: Beneath the Surface »