In January 2013, the Washington Post ran a story that discussed the links between former Florida governor Jeb Bush’s education reform foundation, Foundation for Educational Excellence, and another education reform group, Chiefs for Change.  Emails were released that revealed each organization was “working with public officials in states to write education laws that could benefit some of its corporate funders.”  A watchdog group, In the Public Interest, published the emails. The group was concerned that educational companies are contributing to the two reform organizations in order to further an agenda that may or may not be beneficial to schools, but would help the companies' bottom line. Members of Chiefs for Change are former and current school officials that fall in line with Governor Bush’s education agenda. While there is nothing abnormal in that, one member, Florida education commissioner, Tony Bennett, jumped to Florida from Indiana “after Indiana voters rejected his Bush-style reforms last November and tossed him out of office.”

There are strong connections between FEE and the conservative American Legislative Exchange Council (ALEC), according to the nonprofit Center for Media and Democracy:

Aptly named FEE, Bush’s group is backed by many of the same for-profit school corporations that have funded ALEC and vote as equals with its legislators on templates to change laws governing America’s public schools. FEE is also bankrolled by many of the same hard-right foundations bent on privatizing public schools that have funded ALEC. And, they have pushed many of the same changes to the law, which benefit their corporate benefactors and satisfy the free market fundamentalism of the billionaires whose tax-deductible charities underwrite the agenda of these two groups.

FEE and ALEC also have had some of the same “experts” as members or staff, part of the revolving door between right-wing groups. They have also collaborated on the annual ALEC education “report card” that grades states’ allegiance to their policy agenda higher than actual student performance. That distorted report card also rewards states that push ALEC’s beloved union-busting measures while giving low grades to states with students who actually perform best on standardized knowledge tests.

We all know that many foundations cannot exist without some help from private donors, but foundations that rely heavily on corporate funding concern me. These foundations run the risk of being corrupted by said corporation’s standards and bottom line. The Foundation for Economic Excellence and Chiefs for Change run the risk of this. The fact that policies like mandatory online classes, expansion of charter schools, etc. fall in line with their corporate backer’s own products could possibly end up hurting our kids. I agree that online education needs to be expanded, but to make it mandatory requires a lot of infrastructure overall that will take years. Privatization of schools is, in my opinion, a dangerous path to go down.

Testing companies make a lot of money off education policies that require the state mandated tests most of us are required to give. Georgia just recently decided to withdraw from the Common Core standardized test because it was more than the state-testing budget allowed. Most, if not all, standardized tests are written and published by private companies like Pearson.  Heck, if your child wants to go to college, they have to do well on the SAT and ACT, no other test. When I took the GRE for grad school and my online GACE exam for one of my certifications, I went to a testing center owned and run by Pearson. If you have ever taken any of the above tests, you know that they can very expensive. Making a school more expensive to run may not bode well for already struggling school systems by forcing them to buy from specific corporations.

So what can this mean for the classroom? I worry that teachers may not be allowed to be innovative in the classroom. If you have been in a school where a bunch of new books, technology, and policies have been implemented, it gets difficult to go off script because you have to use it, and you have to get your money’s worth. If it is a district wide policy, you must follow it, no matter your opinion or, as I have seen, the statistics until the contract runs out. I have worked in systems where they will keep doing the same thing over and over again, even with negative results, because they paid for it. Mandatory online classes through specific companies that funded your policy-making efforts does not allow for the best education for our students. Also, how do these students get access to the computers that give them this type of classroom? Most of us have taught in schools where students may not have access to computers or Internet, etc. We must address a lot of other educational issues before the policies recommended by the Foundation for Educational Excellence and Chiefs for Change can even be discussed.

Education is a definite collaboration of private and public entities because of how our country runs, but we must be wary. What do you think? Do you agree with Mr. Bush’s groups? Are you wary like I am? Let me know because a dialogue needs to happen in order to even begin real change in our education system.

It's Not a Rotten Education: Response to TIME Magazine

Assessing the Damage: What students should know about tests like Smarter Balanced

Because We Know: The Art of Teaching 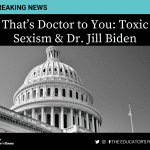 That’s Doctor to You: Toxic Sexism & Dr. Jill Biden
« Activities for Making It through the First Week (and Beyond)
Philadelphians: Don’t Let School Issues Halt Your Student’s Education »