Thank you, Joseph Epstein, and The Wall Street Journal, for reminding us that sexism, elitism, and male mediocrity are alive and well. Just in case we had our heads in the protective sand for a moment, Epstein’s bloviation reminds us that America’s women, education systems, and educators, are devalued at every level.

He sets the tone in the first line. In the most blatant form of patronizing language, he actually calls Dr. Jill Biden “kiddo.” I had to read it twice, sure I misread. In an America where members of congress can be called “f-ing bitches'' without consequence, "kiddo” is not surprising, but still shocking for its gross disrespect.

He insinuates Jill Biden is audacious to have pride in her work. He says she needs to sacrifice the “small thrill” of being called Dr. As if the only benefit of her education is the bragging rights.

Would he have had the same reaction if Jill were Joe?

Given that this is a post-election, bizarrely pointed attack on Jill, I’d wager, no. He even tells her to instead embrace the “larger thrill” of moving into “the best public housing" after the inauguration. I can’t help but see this as a dig at women, traditionally female roles in the home, and public assistance systems that Democrats like the Bidens would champion.

Epstein calls people who display their doctorate “pathetic,” and goes so far as to say that any doctorate in the humanities or social sciences is “bush league.” Click To Tweet

So every professor, of every humanities subject, at every university in the United States is somehow unworthy of their degree? I shudder to think about where our society would be without classes in gender and ethnic studies. Let alone history and English.

He then laments the golden age of PhDs. Chock-full of Greek and Latin, apparently these degrees were “legitimate” because candidates were likely to pass out during their oral exams. Adding a nice dash of ageism, he says that because Dr. Biden earned her degree 15 years ago, at age 55, there’s no way she faced such rigor.

Similarly, his rather lengthy non sequitur about his disdain for honorary doctoral degrees is pompous and unwarranted.

Jill Biden has a Doctor of Education (Ed.D.) in Educational Leadership from the University of Delaware, not an honorary degree. Epstein boasts that he himself taught for 30 years at Northwestern University without a higher degree. (Northwestern, for its part, has since condemned this op-ed)

If he apparently didn’t need a doctorate for his career, why does it bother him so much that Jill has one? He isn’t a Dr. of any kind (wielding neither a pen nor a stethoscope), so I’m baffled by his disparaging soapbox.

It’s the same self-centered logical fallacy that leads people to claim that two men marrying somehow cheapen their own heterosexual marriage of 15 years.

If you don’t have the experience, then what gives you the right to have such a caustic opinion? Besides white male mediocrity, that is.

In perhaps the final straw of this viral mess of an op-ed, he suggests that an Ed.D. is unworthy of study. He lists her degree with the caveat "I believe," like confirmation isn't just a Google search away.

This article comes on the heels of a devastating year for all facets of education. Educators at all levels address trauma, fill opportunity gaps, provide childcare, meet widespread mental health needs, and keep students on track academically.

We’re simultaneously doing everything we can, and blamed for not doing nearly enough. We’re responsible for fixing decades of systemic inequities that are only prominent now that the privileged are affected.

This year has revealed that we need more well-qualified, hardworking, passionate, and yes, educated, people in educational leadership. At the building, district, state, and national levels.

What might 2020 have looked like with an actual educator at the helm of the Education Department? Perhaps we wouldn’t have had a push to reopen schools without support. Maybe educators wouldn’t shoulder the blame for a global pandemic.

Sure, Dr. Biden is not going to save a life with a scalpel, but no one is expecting her to.

Equating teaching and medicine is apples to oranges. This false, obtuse hierarchy degrades the work that every educator does, at every level; from phonemic awareness to doctoral theses on the history of redlining.

I personally know at least one female teacher in my building who has a Doctorate but doesn’t use the title. It might be a purely personal choice, and one I respect. You do you.

But, I also know that it’s nearly impossible to separate our own choices from societal conditioning. Does the subliminal messaging all girls receive motivate her? Those well-worn lines that tell us not to be too loud or too proud?

She is one of the kindest, most empathetic people I’ve ever met. So, does she feel strange displaying her accomplishments so "boldly"?

I, for one, am going to start publicly acknowledging her work. The next time we’re in a meeting, she’s going to hear Dr. from me. She might blush and say it’s not necessary, but I’d have to disagree. If we’re really in this moment culturally, where a prominent woman with a legitimate degree, in an essential field, can be attacked in a misguided op-ed in a major publication, then that visible acknowledgment is necessary.

One small step for educational respect, one prefix at a time. 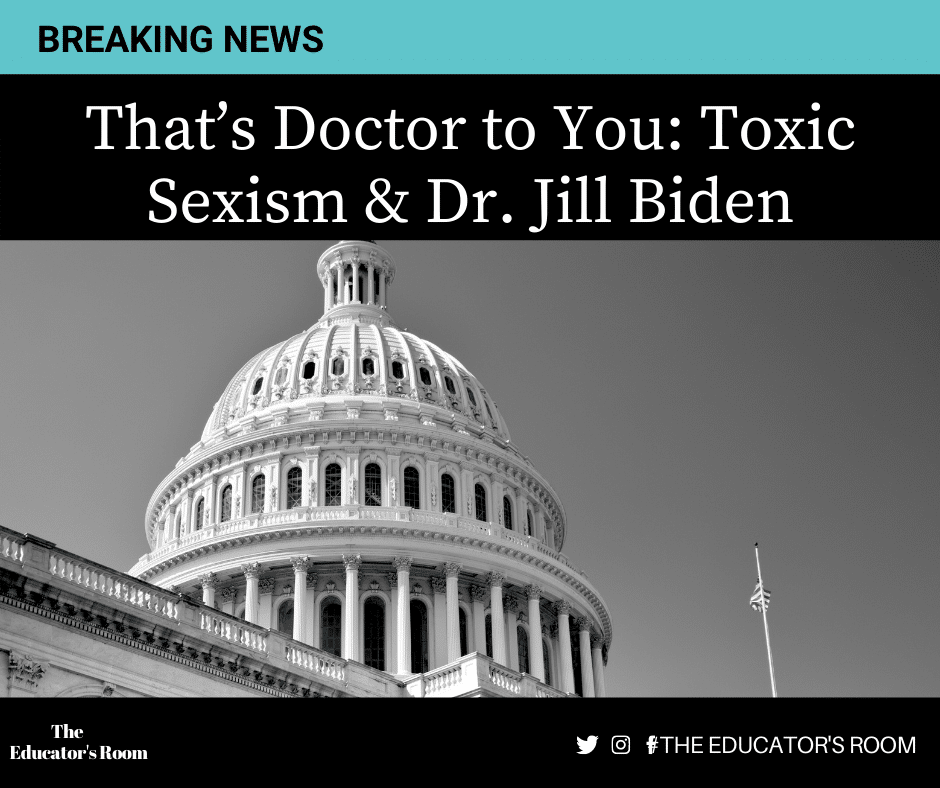 Equity in Action: Mitigating Unconscious Bias In the Classroom
« Painless Poetry: A Road Less Traveled
Building a Plane While Flying, Lessons Learned from a Hybrid Teacher and His Student Teacher »