In growing numbers, parents and political groups have a lot to say about education. Certain acronyms are drawing especially intense criticism. CRT, SEL, and DEI have inspired ravenous debate. The absurd assertion that educators are teaching white children to hate themselves is the catalyst for this greater hunt for “liberal indoctrination.”

If you can't recall the school board meeting in the 1989 film Field of Dreams, you might want to revisit that one. It's good and more relevant today than ever. In 2022, banning and burning books is very much on the table, with political leaders openly endorsing it.

Conservatives claim that CRT (Critical Race Theory) is infiltrating our classrooms, and children are sacrificial lambs to a radical liberal agenda. Did you know that preschoolers with special needs in North Carolina are learning about their role as oppressors and the inherent evil of their whiteness? Actually, no. That's not happening. At all.

Oddly, in Idaho, parents are facing the same crisis. Their three-year-old children are mastering a collegiate academic theory about systemic racism instead of learning their colors and shapes. Wait, scratch that. That's not happening either.

What's actually happening? In the case of North Carolina, teachers were offered training in "Equity and Cultural Responsiveness in the Early Childhood Classroom." They explored ways to incorporate multicultural picture books. They reflected on how students can see themselves in the curriculum. They thought compassionately about how to support every student.

In Idaho, one Republican lawmaker, Dorothy Moon, claimed they were teaching CRT in Boise County. She provided no evidence. That didn’t matter to The Idaho State Senate. They became one of only four states to provide zero funding for pre-k education. The perceived "indoctrination" of three and four-year-old children resulted in the abandonment of early childhood education entirely. Talk about throwing the baby out with the bathwater.

"Not since McCarthyism have teachers been this vilified. We've been cast as devious liars, secretly hiding destructive, pornographic lesson plans we thrust on your children the moment you turn your back." Click To Tweet

“Preying on Disabled Three-Year-Old Children”: The Smear Campaign Against Teachers

Sloan Rachmuth, the president of Education First Alliance, had this to say about CRT in schools: "Preying on disabled three-year-old children- getting them to participate in a political movement, and to hate themselves based on skin color in the process, show our public schools to be more morally corrupt than all others.”

According to Rachmuth, teachers are pariahs in a morally reprehensible system promoting self-hatred among three-year-olds! How could you send your child out the front door if you believe that?

Not since McCarthyism have teachers been this vilified. We've been cast as devious liars, secretly hiding destructive, pornographic lesson plans we thrust on your children the moment you turn your back. The same group applauding the defunding of early childhood education have labeled our teachers "abusers."

The Attack on CRT Has Moved on to SEL

"Misinformation,” otherwise known as lies, built this rage. It fed and nurtured it. As an educator, it's profoundly disappointing to see so many people devour propaganda and organize to regurgitate it. Classroom teachers and administrators are in real danger of being targets of a new Red Scare as we are regularly accused of promoting our "communist agenda."

With some significant wins in their column, this conservative push is coming for more. Social-emotional learning (SEL) is now under attack. We, as a profession, are accused of using SEL as a trojan horse for Critical Race Theory. Groups like Truth in American Education and The Center for Renewing Education are patting themselves on the back for seeing through our thinly veiled disguise.

Social-emotional learning teaches children how to be decent human beings. That's it. It's about learning the value of kindness, responsibility, empathy, and self-respect. Jane Robbins from the conservative online magazine The Federalist would call me a liar. Her description of SEL? “Forget teaching kids to play nice – today’s SEL intends to propel them into Antifa.” Sadly, her outrageous claim receives eager nods of agreement in many school board meetings.

Recently, terms like "safe," "identity," and even "kindness" are scoffed at and dismissed as “woke” culture. A loud minority have drunk the kool-aid and demand we leave their children's emotional welfare alone. What would that even look like? "Alright, kids, we're going to learn and practice empathy today. Josh, please go in the hallway. Your parents will explain empathy at home."

Meanwhile, some conservatives argue that children aren't capable of having mental health issues anyway. Strangely, they won't hesitate to describe the emotionally devastating and mentally scarring impact of masks and remote learning.

Georgia's gubernatorial candidate Kandiss Taylor runs on the campaign slogan, "Jesus, Guns, and Babies." She tweeted that SEL is a "communist, evil, divisive curriculum" (emphasis mine). There's that word again, strategically slipped in whenever possible.

Teachers Must Fight for SEL

And so, it has come to this. Teachers must advocate addressing the emotional health of children. We must debunk nonsensical accusations. What can we do?

We can speak up. Speak up for social-emotional learning. Reputable studies are overflowing with evidence that SEL leads to greater academic achievement, emotional health, and overall success.  Schools that implement SEL see significant and consistent improvements in almost every facet of school life. Any teacher can tell you that.  Cold Water Springs Middle School in rural Nevada is a perfect anecdotal story of how and why SEL works.

Our research-based evidence crushes their hyperbole. Don’t shy away from speaking up for social-emotional learning. #SpeakUpforSEL is a powerful resource for teachers to show the world what SEL does for children. When parents understand what SEL actually is, see it in action, they overwhelmingly support it for their children. Fear-mongering has vilified our best teachers for valuing racial equity and being anti-racist. Don’t let them destroy social-emotional learning as well. 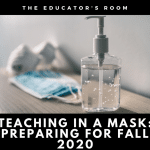 Teaching In A Mask: Preparing for Fall 2020 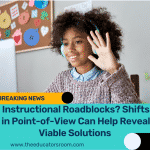 Let the Pandemic be the Mother of Innovation in Schools
« I’m a Black Woman in Education. I Know Exactly How Ketanji Brown Jackson is Feeling.
Five Ways Administrators Can Support Teachers »