I have been obsessively researching growth mindset over the past few weeks.  And one of the many misconceptions that I have discovered is around the idea of effort.  It seems that many people believe that a growth mindset means trying and trying until you get it right.  The more you practice, the better you get.  So giving students lots and lots of practice must be the best way to help them improve on a skill?  That’s what I though, at least, until I delved deeper on the topic.

But Carol Dweck, the psychologist who coined the term “growth mindset,” and other psychologists, namely Swedish psychologist Anders Ericsson, distinguish between what is often called “deliberate practice” and "uninformed effort."

Deliberate practice includes getting feedback from an expert and examining mistakes in order to improve from them.   It means learning as you go, not just meaninglessly repeating the same task over and over. So how do you encourage deliberate practice in your classes?

Start off with challenging material.  It might go without saying, but if your students aren't challenged by the material that you are giving them, they have nowhere to go.  They won’t grow if they are expected to stay in the same place.

Teach your students multiple paths to finding the answer.  Yes, I wish that all of my students organized their essays the way that I like, but I also know that this isn’t really the optimal situation.  So I suggest a few ways to set up the paragraphs—just like I teach more than one way to analyze a poem or to write a reading log or to discover a thesis statement.  Then, I let them figure out which way is best for them.

Give them feedback whenever possible.  I don’t believe that covering essays with red pen marks helps students at all, but I do believe in giving constructive feedback whenever I can.  This might take the form of a push during classwork, “Could you make your answer to number two more specific than that?” or  “Why don't you add some more detail to that last paragraph.”  It might be comments on an essay draft that I quickly read in class, “Why do you think you made that decision?” or  “Could you talk more about what went on that day?” or  “Do you think that this point works best at the beginning of your argument?”  It might be on the final draft of the kind of paper that students will write again and again, “You have done a great job making your topic sentences more specific, but I still think that a few need to focus more on the main points of the paragraphs.”

Teach them to examine that feedback.  When students have a growth mindset, they no longer see feedback as breaking them down or insulting their abilities.  Still, it is easy to slip into a fixed mindset—thinking that “I must just not be good at this stuff” gives kids (and adults!) an easy way out.  So coming back to that feedback, talking about it with students, and teaching them that it is something to celebrate rather than something to avoid, is also super important.

When students have a growth mindset, they no longer see feedback as breaking them down or insulting their abilities. Click To Tweet

Give them meaningful practice.  Assigning the same problem over and over doesn't test students’ abilities to take on challenges and grow through deliberate practice.  Giving them new tasks—new problems or puzzles or topics to tackle—does.  As soon as students realize that you are just going through the motions, giving them work to fill their notebooks rather than two stretch their capabilities, they will write off the class.  So you’ll need to keep offering new challenges.

Then let them go.  I know how difficult it is not to jump in with a solution or an answer for a struggling student.  In fact, it is almost impossible not to want to save them from their own frustration.  You just have to be confident that you have given them what they need.  Growing is often painful, and if you lessen that pain, you’re just holding those kids back. 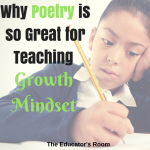 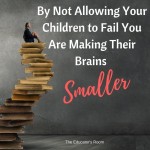 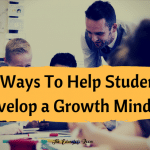 Tried and True Resources for Curriculum Reinforcement
« Strike!
Using Board Games In The Classroom »