Last week, we explored several what teachers can learn from doctors in my first article on "deskside manner." As some of our readers and Facebook followers pointed out, there are some serious discrepancies and disadvantages that teachers have in comparison to doctors. Let's explore some of them:

1 - Teachers need to see 20-30 students at a time; doctors see one patient.
This is easily the shrillest comparison between our two professions, and the most lamented by our readers. When the doctor enters your room after a knock, your his/hers for a solid 15 minutes (or however long your appointment takes). There really isn't anybody else fighting for the doctor's attention; comparatively, a teacher deskside manner will not only have to meet the needs of their 20-30 students over the course of a class period (or school day), but also their parents' as well.

2 - When there's a nationwide epidemic, it's not the doctor's fault; However, teachers are always to blame for educational ills.
Think about it. This year, the big fear is the Zika virus. Last year we were gripped by an Ebola crisis. In recent years, we've had to worry about swine flu, SARS, mumps, and more. Never on the list of faults did you find a doctor. However, when the Programme for International Student Assessment scores and the U.S. ranks near the middle of the pack (as Cari Harris pointed out in her most recent article), teachers are to blame.

3 - Doctors need to worry about the cost of business, while teachers need to worry about emotional costs.
Doctors certainly have a huge expense when it comes to medical malpractice insurance and other terms of overhead. In fact, more and more are leaving the profession because doctors are paying upwards of $35,000 a year in medical malpractice insurance. Could you believe that!? That's just part of the overhead doctors need to worry about on a regular basis.
What's most driving teachers out of their profession, though, is not measured in overhead. Instead, it's what's in their head. Deskside manner is exhausting. Ruben Brosbe reported earlier this month that, "If we don’t acknowledge this stress and treat it we are ultimately doing a disservice to our students." In other cases, it's simply driving teachers out of the profession.

4 - In medicine, many of the top bosses and CEOs still see patients; superintendents, district office administrators, principals, content supervisors, and department chairs largely do not.
I'm envious in health care that even the top brass in a hospital are still required to see patients. Think about the last time that your district's superintendent taught a class of 6- or 16-year-olds. Health care administrators know the major obstacles and issues in providing the best service because they still provide bedside manner. Many educational administrators do not. This is even less so of the decision makers in school boards, state departments of education, state legislatures, and Congress.

5 - Teachers are often the lone official in their room.
Doctors have nurses, secretaries, and specialists to see you and help you on  your way. Teachers are not only expected to teach 20-30 students, but also to take attendance, keep paperwork on them, answer the phone, deal with discipline, and make 100's of other snap management decisions while differentiating and directing. Deskside manner is very multifaceted.

6 - Teaching is seen of as a career "backup plan" - while those pursuing an MD consider it a priority.
I explode a little on the inside each time a student tells me that they "might want to be a teacher" if other things don't work out.

7 - If doctors are jerks, many are given the benefit of the doubt because "they're good at what they do." When teachers are jerks, they're bullies.
Do you seriously think a show like House would make have any future beyond a pilot episode if he were an M.Ed. instead of a MD? Granted, I understand the limits of the argument using a fictional character, but I've met many patients who make excuses for doctors who also point the pitchfork at teachers who they deem to have poor deskside manner. Check out this video montage of "Top 10 Reasons to Love Dr. House" and ask yourself, "if the main character were a teacher, how would I think differently?"

8 - Everybody has been in school, so that makes them feel like they're also specialists on education.
Benjamin Franklin once quipped that the only certainties in life are "death and taxes." Well, now we Americans can add public education to that list. Since it's as given a right (or punishment) as the first two, many a citizen believes that, since they spent 13 years sitting in a K-12 classroom, they obviously are experts in educational operations. But, just because I've put Band-Aids on myself for the last 33 years, I don't proclaim to know more about bone density or communicable diseases than my doctor.

9 - Teachers are paid with tax dollars, so their salaries are public robbery; doctors' salaries, mostly paid by private companies or non-profits, are earned.
It's no lie that doctors do very well for themselves, and, frankly, they've earned it. Not only does the average doctor spend 11 to upwards of 17 years in undergraduate school, med school, and residency, they often have people's lives at their fingertips. They earn their money because they worked very hard for it, and they also provide health care, a truly essential public good.
On the other hand, teachers also provide a very identifiable investment in the youth (and thus future) of America, but are often placed in the pillory for gouging people's pocketbooks.

10 - As Rhonda G. pointed out on our Facebook page, there really are no proper comparisons for teachers.
I don't mean to pretend that "bedside manner" and "deskside manner" are perfectly comparable analogies. However, in my county, I'm taxed at the same rate as doctors, and the public holds me to an equal (if not greater) esteem.

While I think we teachers have something to learn from doctors, I think many of them - and Americans, as a whole, have you - also still have much to learn from us. And I am ever so grateful for that opportunity. 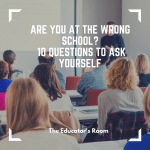 Are You at the Wrong School? 10 Questions to Ask Yourself 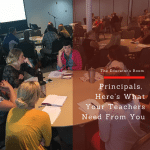 Principals, Here's What Your Teachers Need From You