Twitter feeds have been lit up with criticism of Donald Trump Jr.’s latest comment at a political rally in El Paso, Texas on February 11, 2019.

“You know what I love?  I love seeing some young conservatives, ‘cuz I know it’s not easy.  Keep up that fight, bring it to your schools.  You don’t have to be indoctrinated by these loser teachers that are trying to sell you on socialism from birth.  You don’t have to do it.”

In education, we often say that the apple does not fall far from the tree.

Educators, politicians, and others have gone on Twitter to call out Donald Trump Jr.’s remarks.  However, 280 characters are not enough to express all that is wrong about Jr.’s rallying cry.

Let’s start with the idea of the “fight.”  He calls on young conservatives to keep up that fight.  What is exactly the purpose of this fight?  Is it a fight to return to capitalism in its purest laissez-faire form as theorized by Adam Smith in his Wealth of Nations in 1770?  A work that called for no regulation and no taxation of business?  Would we return to the days of the Rockefellers, Carnegie, and Vanderbilts?  Where does pure capitalism leave everyday Americans? If we returned to pure capitalism would that wealth really trickle down to most Americans so that they would benefit from a higher standard of living?  Have you seen your tax return for the 2018 year?

History is the greatest teacher about capitalism creating many rewards, but that unregulated capitalism always creates horrible disparities.  These inequities yield higher crime rates, a cycle of poverty, and despair.  I am sure, however, that Jr. is not an intellectual who has studied capitalism.  I wonder what sort of student he was in his private school, privileged classrooms?  I am curious as to how his “loser” teachers instructed him on the “isms” that are the economics curriculum of New York State?

I teach in a suburban, public, high school in the great Empire State.  Last week, I instructed sophomores on the four “isms” of economics:  capitalism, socialism, communism, and fascism.  Note, I did not focus on one type of system to the detriment of any other.  As my students study the interwar years, they often struggle with these concepts so I made it a point to elaborate on the strengths and weaknesses of all four ideas. Donald Trump Jr. incorrectly believes that teachers, especially social studies teachers, are indoctrinating students in socialism because we are mandated to teach about a system that is currently in our mixed economy and is part of Canada's and most European countries’ approaches to health care, education, and social welfare.

Mr. Trump Jr., I don’t have a beard and I don’t indoctrinate my students in Marxist-Socialist ideologies.  Rather, I inform.  I teach.  I explore with my students the issues and the consequences of many economic and political systems.

Furthermore, I am one of those "loser teachers" who has taught in an underfunded over-mandated public school system for twenty-four years.  And yet, with all of its flaws, I would still support the socialist funding of public schools over your idea of “school choice” and privatization because education is a basic human right. It is what America values.  Socialism has its place in the United States and it funds the military, Social Security, hospitals, transportation, infrastructure and your father's paycheck (which he graciously donates to organizations funded by public dollars).

And yet, with all of its flaws, I would still support the socialist funding of public schools over your idea of “school choice” and privatization because education is a basic human right. Click To Tweet

Finally, Mr. Trump Jr., are you really calling for young people to wear their MAGA gear and argue with their teachers?  Are you sincerely telling the youth of America to be disrespectful to their teachers?  Hmm….Hitler gave the youth uniforms too.  He told the young men to stand-up to the Social Democrats.  These young men proudly beat up people at anti-Nazi rallies and destroyed the newspapers that expressed opposing views. Mao Zedong told his Red Guards to destroy intellectual’s property and to think only according to his little red book.  These were leaders who were doing the indoctrinating.  Teachers do not brainwash people, corrupt leaders do.

Is a fight what you and your father want, Mr. Trump Jr? If so, you got it. There are 3.1 million public school teachers, or as you call them "losers," in America working their asses off to help our youngest citizens think critically and hopefully not blindly follow any single idea to its illogical extreme.

.@DonaldJTrumpJr's message to young conservatives: "Keep up that fight. Bring it to your schools. You don't have to be indoctrinated by these loser teachers that are trying to sell you on socialism from birth." pic.twitter.com/IGzyK48Ilp 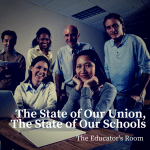 Teachers In Action: From the Classroom to the Convention
« Preparing Students For Teacher Absences
Self-Care Is Priority One for This Teacher »