We've all heard the old adage, "There's no "I" in TEAM," implying that we would do better to work together instead of independently forcing the venture upon one's self. But, what is the usefulness of working as a team? Would we not be more productive if we held our own, stuck to our guns, stayed in our comfort zone; played in our own lane? Ask any coach or director what it's like to work with a group that will not come together as a team and you will probably hear stories of contravention. But there are many activities in life where teamwork is not essential. Is a school more like a basketball team or more like a chess player? Is it important that staff and administration become a coalition, or would it be just as well  attempting to play the game on our own terms and talents? Are schools today just too large to simplistically operate as a unit?  I've researched and experienced all sides of the situation and have come to the conclusion that operating as a team is truly the optimal desire in a school, but as always, teamwork takes time, energy, balance and fortitude.

The Usefulness of "I"

Ask any teacher and they will tell you that working alone is "what we do."  The classroom teacher is solely responsible for their class.  Unless a teacher is in a true co-teaching situation, they alone are responsible for the planning, the grading, the lessons, the execution, style and integrity of what happens within the four walls of their classroom.  Because of this truism, anyone would be hard pressed to say that there is no "I" in team; without the "I" the team would not function.  But I would also argue the point that without the team, the "I" would not function either.

Ask any coach what it's like when a teammate refuses to operate within a team-ship mentality and their response would most likely be one of frustration and discord. Points may be scored, games may be won, but championships will not...and if they are, it's through much resentment and heartache. In most schools across America, teachers working in teams have become the norm over the years. These teams may consist of grade level, department level, PLC (Professional Learning Communities) and more. So for many teachers (if not most), working in teams is hardly anything new.  Where the "I" is missing from the team seems to be occurring at the whole-school level. From top to bottom, from custodian & cook to superintendent, and everything in between, the goal should be that of team mentality...all working together as a unit for the good of the school.

What Teamwork Does NOT Mean

"We are Family" is a popular song that many have attributed to various people in their life. What is the difference between becoming a family or a team? Many would argue that there is very little difference; if you become a team, you become a family, but it really has to do with the amount of personality you allow into your building. Becoming vulnerable, allowing others to see your mistakes, keeping your unique style and personality all make up a family. Family does not take interest in robotic humans. Families make up a unique mixture of ideas, personalities and types...much like what you will see in your school. Becoming a family is really the next step after becoming a team. It's what you become once you've agreed to work as a unit. It's what becomes of a team once you've accepted each other's differences; once you've begun to support each other; once you've begun to "love" each other unconditionally instead of conditionally; once you've decided that being there for another person is more important than elevating yourself; once you've decided we are in this together through the good times and the bad...that's a family.

How does your school match up to the "teams" of the world? Chances are, if your school is struggling to work together as a team, you are not alone. Becoming a team (ask any coach) is not something that happens overnight. It usually occurs through much strain and strife and is constantly evolving. No matter how large or how small your school might be, teamwork is optimal towards the success of your school. So, you see, we really did discover the "I" in team! It was there all along...hiding in the capital "A" in TEAM.

Growth Mindset: The Power of "Yet" 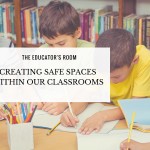