My class still works off of a weekly job chart. I have always tried to incorporate community responsibility into our classroom lives. We have the basics listed as jobs, such as computer helper, line leader and light helper. But I also have not-so-standard jobs listed as well, jobs like trash helper, a vacuum-er and a person who sweeps. When I added these jobs to my list seven years ago I didn’t think much about them, figuring that most kids have had to do jobs like this at home. But the longer I teach the more I realize that ‘chores’ at home have gone by the wayside.

And this year has totally solidified that fact.

Close to the beginning of the year I realized I had a handful of students who didn’t know how to use a vacuum. Seriously. Didn’t know how to even turn it on. So I asked them if they had chores at home to do. They looked at me like I had an arm growing out of my head. So that led me to ask my class who had chores to do at home. Three hands went up. I asked who got an allowance. Almost everyone in the class raised their hand. “What do you have to do to earn your allowance?” I asked. Most kids answered nothing, that their parents just gave it to them each week. A few other students answered that they had to do well in school and not get in trouble. I asked them if they had to do their laundry and clean their room. Again, a majority of them responded with a solid ‘no.’ I just shook my head. I still can’t believe parents sometimes, even after the two decades I’ve taught.

So that evening, as I was headed home, I reflected on the day like I usually do, but couldn’t get past the discussion that had taken place that morning. We have a generation of kids who won’t be able to live on their own. They aren’t being taught how to manage money, cook meals or clean up after themselves. What can we do to help with this?

I rethought my job chart. I took away some of the basic classroom jobs and replaced them with ‘organize game shelves,’ check mailboxes for tidiness,’ ‘job manager,’ ‘tidy up snack area,’ ‘tidy up library’ and ‘manage supplies.’ Not doing laundry or filling the dishwasher, but at least it was introducing tidying up and being responsible for managing something.

I’m not going to lie. The first few weeks of the new jobs found kids fumbling with figuring out how to accomplish assigned tasks which in turn frustrated me since I figured these tasks would be an easy introduction of basic skills. But after several weeks and rotations through the new jobs the kids became more knowledgeable about what my expectations were and began catching on to how to be successful at fulfilling the jobs. I have also noticed that things stay a bit tidier than they used to, especially desks, now that the kids are responsible for picking up after themselves more. My goal is that this carries over to their homes and continues with them through the next grade levels. I’m trying to ingrain in them the need for being responsible in every aspect of their lives.

Do you help instill the need for ‘chores’ in your students? 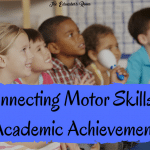 Wiggles, Giggles and Learning
« Protesters Were Wrong to Block Betsy DeVos From School
Considering the Case for Betsy DeVos »