I experienced major burn out my 4th year teaching. Tears and rants about how much I hated teaching were regular occurrences for my, then, boyfriend.  Emotionally, I was a wreck most days---almost always angry and annoyed. The only things that kept me composed each day were the kindest grade level partner, an empathetic assistant principal, and the threat of losing guaranteed money.  When I think about it now, burn out was inevitable and it started during my teacher training. My cohort and I were inundated with anecdotes from professors about the hardships of the teacher life, especially during those first years. In order to be a good teacher, you would need to work as much as possible. Think only about the students. They’re what really matters.  At least, that’s what I gathered after four years of college preparation and two semesters of student teaching. As a type A overachiever, like most of the people in my cohort, I graduated college fully committed to the belief that teaching would be extremely challenging and that in order to be successful, I would need to work as much and as “hard” as possible.

So, when I got hired and an administrator at the school I’d be working for told me. “I don’t have time for you to be a new teacher. I need you to be a veteran 5th-year teacher NOW”, I dug my heels in. To a perfectionist, these words were a challenge. Little did I realize, that they were also a burden, one that would become a paradigm for me in the early years of my career.  For a new grad with a whole lot to prove, I was eager to show that I was a talented teacher, capable of making the most experienced administrator believe that I was seasoned---and I’d spent exactly 0 years as a practicing, credentialed educator.

My first year, I spent working non-stop. Most days, I   stayed in my classroom until 6 pm only to arrive home and continue working until late into the night. I spent hours creating materials and attempting to make every lesson in every subject area as dynamic as possible.  If it didn’t involve an original song, dance, or collaborative activity, it wasn’t good enough. Use the book? Only if I could adapt and make it more high energy and engaging. When it came to behavior management, I was a natural. I could be fun and easy going, yet stern and convincing. I gained a reputation as a regulator fairly quickly. Teachers would say that I needed to have “so and so” in my class because I would make them behave.

That year and the next 2 years that followed were much the same. Work. Work. More Work. Fighting windmills in attempts to “get ahead” of the demands that were endless planning and grading. Still spending every spare second to make every lesson incredible and every learning opportunity electric, I was unknowingly, speeding towards burnout.

My 4th year, though, something snapped.

At that time, I had been asked to move from 2nd to 4th grade. The year, though,  started much the same as all the others, working myself into the ground to prove that I was better than my actual years of experience might suggest. Add to that, a rowdy group of 26 students plus the fact that my partner teacher and I had to build new units for every subject---I cracked. Not in front of students (though I came close a few times) but in front of coworkers and certainly at home. My husband would encourage me to work on my resume and look for new jobs. Each day I dreaded returning to my classroom because I knew that no matter how much I hated my job, I would still continue to exert maximum effort, because that’s what great teachers do. Great teachers don’t care how they feel; they only care about their students.

It took me until halfway through my 6th year teaching to recognize how misguided that paradigm is. It started with a doctor’s appointment in early 2018 when my doctor expressed concern about my recent blood pressure readings. While I had been exercising regularly for more a year, my blood pressure was consistently high with systolic numbers in the 160s and diastolic readings over 100. As we began to account for factors that might have contributed to this issue, a major that was identified was stress. My doctor ordered a blood pressure study. One month of blood pressure taken at home, to be analyzed at my next appointment.  If the results were consistent with my in office readings, medication would be recommended.

I began taking a closer look at the foods I was eating. I increased my physical activity from twice a week to three times. I began to journal about things I was grateful for. I signed up for productivity emails from Angela Watson where she was telling teachers that it’s okay, even good for teachers to take care of themselves!

Essentially, I began to pour, really dump into myself. It was my first time practicing self-care in its truest form, attending to my mind, body, and soul. After 2 weeks of consistent changes, I began to see lower blood pressure readings. I found that I was happier and I could see a shift in my emotional wellbeing. I began to spend less time working so that the time that I did spend working was more targeted and efficient.

Self-care, for me, has been an incredible lesson on the power of thinking and the importance of attending to my own wellbeing for the sake of my success in all areas. I am a better spouse, friend, mentor, and teacher when I am replenished inside and out.

Today, after work, I plan to treat myself to a manicure. Then, I will go home, watch a favorite show and journal three things from today that I am grateful for. Maybe I’ll even end my evening with a ten-minute meditation.

I deserve the happiness and fulfillment that comes from investing in me. I can only pour into others when my own cup is filled. 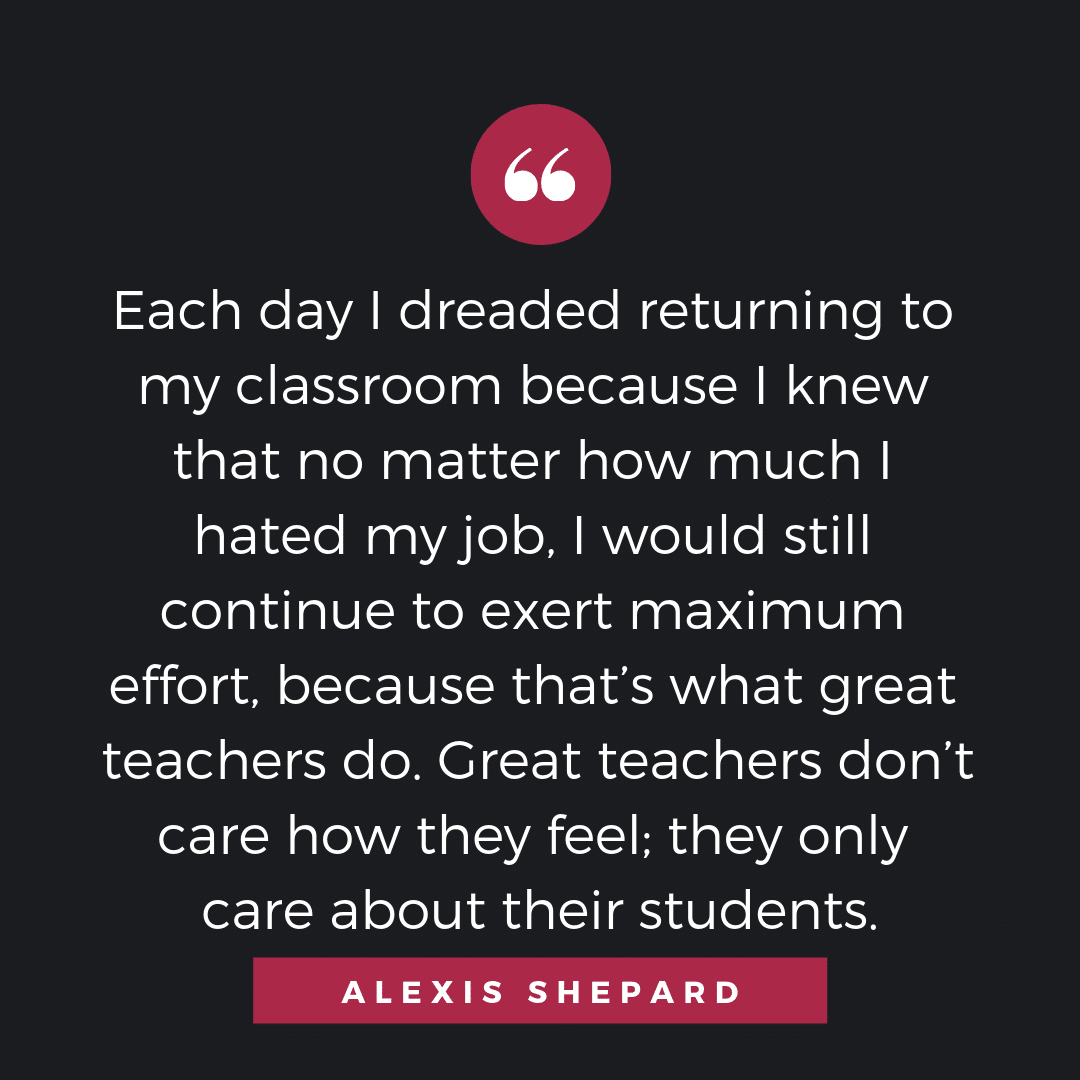 Respect in the Classroom: Earned, Not Expected
« Water those marigolds! Watch those experienced educators bloom!
Stuck Like Glue: What Curriculum Adherence Can Do for Your Classroom »