This week on Twitter, the hashtag #growingupwithmyname has release an outpouring catharsis from people all around the world whose name is a bit... different. Whether it's a(n):

-Spelling of a name - Justin Bieber jested that "he'd be a millionaire" if he had a $1 for every time someone spelled his name wrong.

-Pronunciation of a name - I currently teach Taina, who is livid every time somebody doesn't pronounce her name properly "IT'S TUH-knee-UH! ERRRRRGH!"

-Epitome of a pop culture reference - Your name is Kim Kong?! Hah!

-Continued use of a joke - Hey Faith, guess what? I have Faith in you.

-Unfortunate change of events - could you imagine if your first name was Isis?

-Foreign name - our friends whose name is in another language just learn to tolerate us.

-Name that's easy to pick on - Dick Smallwood actually responded on the hashtag.

-Gender crossed name - never forget how my male friend Kelly was able to go pledging at sororities; my wife's name is Devin, and I often get asked, "are you Mr. Devin Miller?"

Among all the fun exploration of these musings, one common thread emerged - some students are practically scarred by the pronunciation of their names in school! Here are a few things we all could do to mitigate these issues:

-First and foremost, be cognizant that people will screw up their name if you give them the chance. If my mother decided to name me Jaak, I know, for certain, that I'd be called "Jack" at least half of the time.

-Consider how teenagers can contort the name. If your last name is something that is close to representing a part of the male or female anatomy, "Gina" should not be on the list of girl's names.

-Lastly, help your child to practice patience with the name.

Work at learning about how to pronounce names from other cultures. In our school, where Indians constitute 10% of the population (and they're our fastest growing subgroup), teachers and fellow students often bludgeon Indian names and don't really care about it. Watch how these English-speaking Americans speak Indians names and turn them into a joke. That isn't cool.

-If you don't know how to pronounce a student's name, admit it to the student and ask for their help. Have them continue to help you to pronounce it properly. Otherwise, your pronunciation of the name could be wrong all year.

-Give everybody a nickname. Make everyone have fun with their name. But make sure that new moniker is okay with the student.

-Work to be a pronunciation calibrator. Samira Fezjic shared in a CultOfPedagogy pedagogy podcast that there are "three types of name sayin'": fumble bumblers, arrogant manglers, and calibrators.

-Be patient in public. If your name meet any of the criteria above, others are going to go wrong by it. That most especially applies to teachers. On behalf of all of us, we're sorry. But don't be angry with us publicly.

-Help us with your name privately. If you pull any good-natured soul aside and say, "Hey, my name isn't "An-DRAY-uh, it's AWN-dree-uh," they almost certainly will continue to give it a go.

-Be consistent in helping. Seriously. Some students will try two times and then raise a white flag. "Well, this teacher must hate me because he can't say my name right." Sometimes the teacher has no idea.

-Have fun with it. Whenever I wear khaki pants, I get asked for State Farm quotes. I could get all bent out of shape over it, but I've embraced the new nickname instead. In fact, it's helped make me more memorable. In the end, isn't that what's in a name, anyways?

William Shakespeare famously declared that a "rose by another name will smell just as sweet." Seriously, what's in a name? Your personality, more than anything, speaks to who you are.

However, if that doesn't satisfy you, then just watch this clip from Key & Peele's substitute teacher sketch. That that, #growingupwithmyname. 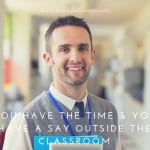 Teacher Expertise: You Have the Time & You Have a Say Outside the Classroom 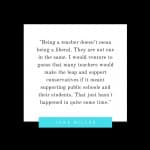 Why Teaching Is the "Most Liberal Job in America"
« Allow Young Readers To Unfold
Is Careerism Robbing Our Children of THE GOOD LIFE? »