This article was edited for length from the original interview. To see the whole interview, please view the video embedded at the end of the article. On February 16th, I sat down with James Sanders, Director of Innovation at the Ed Tech Team, a former middle school History teacher, and Ed tech innovator for an interview using Google Hangout. I was able to hear James speak at a recent Google Apps for Education Summit and immediately knew that an interview needed to happen. I spoke with James about his background, involvement as a White House Fellow, in the White House Student Film Festival and the Department of Education initiative, Future Ready, and so much more.

TER- So tell us your background as an educator.

JS- So I’m a middle school teach by training, spent five years in the classroom teaching primarily medieval World History. I started in 2011 to get interested in technology’s role in the classroom. I was lucky enough to be part of an early pilot with Google, testing out Chromebooks in the classroom, exploring a web-only learning environment. Not just as a place for kids to go online to learn but its role in the physical classroom. I had an evening job at Google working for the YouTube team, primarily with Angela Lin and Will Huddle, figuring out how to bring YouTube into the classroom by rebranding it, showing its usefulness, and creating new resources. We created YouTube for Teachers and YouTube for Schools to help get it into the schools and districts. I worked on a start-up, ClassBadges, and went to KIPP Schools in the San Francisco Bay Area to work on innovation, looking at blended learning, online tools like Khan Academy, etc.

I spent the last year working in D.C. as a White House Innovation Fellow, focusing on various education initiatives like the President’s postsecondary agenda. I also worked with the ConnectEd initiative to bring robust internet to the classroom as well as the White House Student Film Festival. As I was transitioning out of government, I worked with Future Ready Schools. (also http://futurereadyschools.org.) I now work for a group called the Ed Tech Team.

TER: What role did you play in the development of the White House Student Film Festival?

JS: My first day in government, during a reception lead by Macon Phillips of the Office of Digital Strategy, we started talking about YouTube and his work. He connected me with Adam Garber, the President’s videographer, and his team and threw around the idea of a student film festival. Adam took the idea and ran with it. We sketched out a plan and a timeline. Adam and his team did the advertisements, got Bill Nye to do an intro, and got the word out. I helped get the word out to the education organizations I work with. We got all of these submissions and worked with the Department of Education’s Teaching Fellows, picked the best ones, and invited the finalists to the White House where the President met with the kids.

TER: What led you to get involved with Future Ready Schools?

JS: There is this team of people in the Department of Education called the Office of Educational Technology, led by Richard Culatta. This team wanted to do something with superintendents since the can make decisions at that scale. They held a series of meetings with several superintendents. The bulk of the work was done by OET and the Alliance for Excellent Education. I worked with branding and things like that. Credit is due to OET.

As of the interview, Future Ready has collected over 2,000 signatures from superintendents representing the bulk of U.S. schools and tens of millions of students. Partners are releasing posts and links to promote Future Ready.

TER: Why do you think access to technology is so important to education?

JS: Ultimately, it boils down to teachers themselves having the tolls to do their jobs. There is this false argument: Should teachers teach students, or should technology teach students? I think we should empower teachers with the tools, training, as well as we view them. Viewing teachers as entrepreneurs and trusting their decision-making. When a doctor or firefighter gets a job, we trust them that they will be the making the right decisions in their work environment. Why is it, then, that we have to build all of these accountability measures to make sure teachers are doing their jobs? Yeah, there should be ways to measure effectiveness, but at the end of the day, we should trust that this is the instructional leader in the classroom, they will be making the decisions, making sure they have their stuff. They need to have the best instead of less than that.

TER: What advice would you give teachers who want to pursue other things to help teachers and students?

JS: Just doing exactly what you’re doing, Sarah, taking something and putting yourself out there. I can think of many little things I tried that didn’t work. I started blogging and going to events to connect with people and started trying to befriend people I looked up to. When we jump into things, it is easy to get overwhelmed. Twitter is this river of junk, and every now and then, something helpful or useful floats by. It’s about being very strategic about how you take in information and how you use it. Find your niche and passion. Try to figure out what that is and plug yourself in there. This publication is an example of that.

TER: Is there anything you would like to add before we end?

JS: First thing is if you work in a district, find out if your district as signed the Future Ready pledge. You can go to the site to find it.

Second thing is a friend of mine, a former teacher in L.A., has this company called BirdBrain Science. On February 16th, they started their Kickstarter campaign to help create BirdBrain History. It is a personalized program/ “textbook killer” this is an online platform that gives students all the same content, but the content is at their reading level, and they are able to grow as they progress through the content. (Writer’s Note: This company is awesome!)

This interview provided so much information that I couldn’t cover everything. Please check out the Google Hangout video for the entire interview. 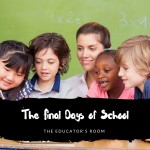 The Final Days of School

Respect in the Classroom: Earned, Not Expected
« Teaching for Mastery in the 21st Century: a Conversation with Utah State Sen. Howard Stephenson
The Importance of Progress Monitoring in Special Education »