Teaching integers can be very frustrating to students. Early in my teaching career I found that many of my students found adding and subtracting integers to be very difficult. I tried teaching the rules and learned that everyone (including me) was frustrated. I began to realize that one problem was that for most children, negative numbers don’t make sense. After all, where do we see them in real life. So I decided that I needed to bring the concept into the real world before proceeding with rules. I realized that my students were likely to get the idea of having money or owing money. If you owed more than you had then you were dealing with negative money.

By using money as a base we wrote different scenarios of positive and negative money. Students would share what they wrote and we would translate their statements into problems. For example – If I have 6 dollars and I owe 7 what is my balance? Students quickly realized that if you owed more than you had you were in a negative money situation.

Once we had the concept of negative numbers having a purpose in the real world I decided to work with hands on activities before introducing any rules. Because I had sets of algebra tiles in my room, I separated the ones tiles out and had students use them in groups. Before we began using the tiles I reviewed the concept that you can add zero to anything and the amount doesn’t change. I instructed the class to add zeros whenever they couldn’t solve the addition or subtraction problems.

Here are some examples of problems that were solved. I did not draw the tiles for this example because they are too cumbersome. However, you can see in these examples that this is the notation step that I used to move away from the actual tiles.

I have all negatives so I can just add. The answer is -6. During this process students began to absorb the steps and often would state the rules in their own words before I formalized them with the class. I always love those Eureka moments!

In my experience using integer tiles to teach addition and subtraction of integers I found that students would let go of using the tiles when they were ready. Some would let go of the tiles and just draw the + and – signs, eventually using the rules that they now understood.
Please let me know if you try/or have tried this idea and how it worked for you. If you need resources for tiles, leave me a comment and I’ll find some for you that are free.

Addition and Subtraction of Fractions 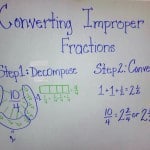 Decomposing Fractions: An Alternative for Converting Improper Fractions to Mixed Numbers
« New Year's Goals as an Educator
Diaries of an English Teaching Assistant in Taiwan: Christmas is Love in Action »