We all know that communicating with parents is essential to being an effective educator, but when the majority of your students speak a different language at home, it becomes frustrating to have to find a translator for every single phone call. I’ve also learned, after numerous confusing emails, not to completely trust Google Translate. I have always wished I was bilingual, so when the opportunity arose for my daughter to attend a dual language school, I was, and still am, all in.

When my husband and I looked into registering our daughter for Kindergarten this Fall, we learned our school district offers a Spanish/English dual language program. We went to their information night and felt intrigued. We both thought, in light of the political climate we live in (post-2016 election), why not enroll her in a program that celebrates diversity and inclusion? Why not expose her to a language and culture that is different from our own? Why not encourage tolerance, flexibility, and acceptance of each other? It was that night we made the decision and applied for the program.

When the opportunity arose for my daughter to attend a dual language school, I was all in. Click To Tweet

I still have no doubts that this is the right program for my daughter. When we told some of our friends about our decision, most offered their support and thought it was a great opportunity.

A surprising handful acted just the opposite; completely opposed to the idea of Dual Language. I’ve heard the following from people since we made our decision:

“Students at the Dual Language school score below the state average on Standardized Tests. There are so many other schools in your District that score so well, don’t you want your kids in one of those schools?”

In short, my answer to this question is no. It’s true, we do live in a really good school district. It’s also true that most of the other schools within the district score better on standardized assessments in the elementary grades. Research shows that initially, dual language students score lower than their monolingual peers, however, their scores start to even out in middle school, when dual language students begin to score similar to their monolingual peers. Recent research also shows that students who continue in a dual language program into high school tend to score higher than their monolingual peers on the ACT and SAT. According to the Center for Advanced Research on Language Acquisition, Tara Williams Fortune writes, “By the upper elementary, or in some cases early secondary grades, English learners from different ethnicities, language backgrounds, socioeconomic levels, and developmental profiles perform at least as well as same background peers being schooled in English only” (Lindholm-Leary & Genesee). Let me also add that I’ve never been a huge supporter of standardized assessments, and even less so now.

“Aren’t you worried they won’t fit in?” Then, in a hushed voice, “I mean, they don’t know any Spanish!”

The dual language program my daughter is enrolled in is what is referred to as a two-way bilingual immersion program. What this means is my daughter’s class will be as close to 50/50 English/Spanish native speakers as possible, with the goal of all students becoming completely bilingual in English and Spanish (this includes listening, speaking, reading, and writing). So don’t you worry, there will be other students whose home language is English. I would also like to add that when it comes to play, kids don’t care what language you speak. Trust me, if my daughter wants to play with someone, she will find a way. Currently, her best friend has a condition known as ‘Childhood Apraxia of Speech’, and she has no problem communicating with him whatsoever. Will my daughter be confused at first? Probably. Will the first few months be a difficult transition from hearing only English to hearing 80% of her day in Spanish? Absolutely. But if you think she won’t make friends in a dual language program because of language differences, I will challenge your thinking.

“But you don’t know Spanish. How will you help them with their homework?”

First off, as a teacher, I’ve never been a huge supporter of homework, mostly because some kids have parents who can help them (or let’s be honest, do it for them), and others don’t. It is impossible to measure how much homework the student is doing individually since I have no control over how and when it is done. In addition, homework is supposed to be the independent practice of a skill they have mastered, or are close to mastering. On that note, if my daughter does have homework she is struggling with, I would communicate this need with her teacher and I would ask for guidance and help. I would also let her know my daughter needs some reteaching of the skill.

“We live in America. Your daughter should speak English.”

This could be the most ignorant statement I’ve heard regarding Dual Language, but I have indeed heard it. All over the world, children are taught more than one language, and only in America is it seen as unacceptable or unpatriotic to speak another language fluently. In Europe, for example, students learn at least one language other than their native language, and sometimes two or three (Bergentoft,1994). I just think of how many more opportunities she will have later in life in regards to travel and work, than her monolingual peers.

So despite some opposition, we stand firm in our choice to enroll our daughter in a dual language program. I do think the benefits far outweigh any educational risks and look forward to beginning this bilingual adventure. My Experience with TNCore - the Tennessee State Standards 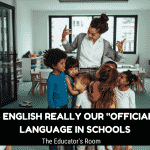 English in America: Is English Really our "Official" Language in Schools?
« Attention Right-Wing: Teachers Aren't Promoting an Anti-American Agenda
Getting my Struggling Readers to Thrive in the Content Areas »