Following an emotionally stimulating conference session presented by Dr. Rochelle Gutierrez, I was intent on waiting in a line behind dozens of people for the opportunity to sit and talk with her. She began her talk with an engaging moment where she asked audience participants to “Stand Up” for the reasons they entered the teaching profession. One group after the other, we began standing; standing as student advocates, as lovers of the mathematics, as people who had been motivated by teachers in the past, as change agents! Dr. Gutierrez continued through an illuminating hour where mathematics was interrogated concerning the “unearned privilege” it possesses in today’s society.

As I sat down with Dr. Gutierrez on the carpeted floor of the convention center with another NCMT conference attendant, I began asking her to elaborate on some of the ideas brought out in the session. The following is a summary of that moment:
KM: Could you talk a little bit more about politicizing mathematics, or why you say that all mathematics is political?

RG: Well … I don’t feel like I’m politicizing it … I feel like it is that way. I think it’s just a matter of … we don’t tend to interrogate mathematics ... as an entity, as a practice, really. I think that we’re taught as if it’s this objective thing out there that exists. It’s not in mainstream society for people to understand how mathematics has developed over time, or to understand the multiple practices that people do in other parts of the world. For instance, in Papua New Guinea they have a base 16 system and … it’s the body … the body is the calculator…so, when somebody’s counting it’s the body that’s being enacted. So, what does that mean when we receive a singular version of mathematics both from the point of view of European mathematics, but also from the point of view of what counts as school mathematics. So it’s like you’re already kind of reducing what people understand about mathematics and its social context.

We get conditioned into thinking … if this is all you know, you think that’s all there is, right?! So…I think that we are not taught, and I would argue that we are not really given permission, to interrogate mathematics because so much of mathematics supports economics and warfare right now. So there’s a real incentive for that to be protected by different institutions … Even what counts as mathematics to mathematicians is partly determined by the department of defense, it’s partly determined by National Science Foundations, and so there are entities that have a say in what’s available to people to understand about what mathematics is first and foremost. So, just like, there’s not a lot of incentive for Whites to interrogate Whiteness as the norm and as the right way to have society set up, there’s not a lot of incentive for mathematicians and math teachers to interrogate this unearned status that mathematics has in society.

KM: So, when I think of, you know, math being political….I’ve often said that for me, I’m twice marginalized in the discipline because I am a woman, and I am African-American. Yet being able to do mathematics has added privilege where there wasn’t any. So, to me, there is an aspect of politics…and I wonder how that sort of fits in…being able to look at mathematics as adding privilege to students’ lives.

RG: Oh yeah! That’s a version of “using the masters’ tools”. So, like if right now mathematics operates in a way that kind of confirms authority, then you want to both at the same time recognize how you don’t really believe it as that … that you see through that…that it doesn’t in and of itself confirm authority on people or some kind of objective truth about the world around us, but you know how to use [this privilege] to your advantage. It’s kind of like “strategic essentialization”. So, yeah … it’s important to recognize that it’s an unearned privilege, and know how to use it when it will benefit you, and when it’s for the right reasons.

KM: Finally, can you talk a bit about this idea of creative insubordination that you mentioned, and how as educators we may have to do that to circumvent those things that are in place to keep this privileged curriculum going? What are some of the things you would say to teachers?

RG: I think for me, I’m using this term “creative insubordination” … and I also use, “reclaiming the profession”, I kind of use them alternately depending on who feels comfortable with what term…some people don’t like that term, creative insubordination, they feel it’s too battle oriented. But, whatever you want to call it, I feel like language is really powerful and it helps you be able to name what’s happening to you…and it helps you be able to name what you’re trying to do. So much of what’s being decided upon by other entities about what’s professional…..is kind of in the guise of, “Do you do these kinds of things with your kids?”, “Are you following these guidelines?”, “Are you earning merit badges?” [This is a reference to for-profit sites that offer merit badges to teachers for promoting and using their products]…this kind of stuff is ridiculous. But that’s what is seen as what it means to be a professional. So, I’m trying to take that term, creative insubordination, and say that’s a form of being professional! That’s what we as professionals need to do to reclaim this profession. We don’t need teaching to be teacher-proof in the way that other people are trying to make it.

We have the means to be able to humanize mathematics. Because it can’t get taught without people, so we have to be complicit with this process. I think there is a point where people recognize… that they’re teaching students first….they’re not opening heads and pouring content in. So the “insubordination” part obviously is the, “I’m not just going to go along with what everybody says”. But, the creative part is not going about it foolishly…I feel like it’s the creative part too, that makes it professional because it requires a lot of intellectual work. It’s pretty complex to be able to pull this off.

It’s a lot harder to do this kind of work…and I feel like creative insubordination is something you can learn…I learned it from my parents, and the more we have language that talks about what we need to do to make this career … and to make mathematics more like what was….the reason we entered into it, the better.

KM: I think the language is….I could see someone who is interested in doing something more, hearing that terminology and thinking, “I’m not going there!” …But the idea of still getting to where you know you want students to be, and doing it creatively, I think is something teachers would be really interested in…even those that wouldn’t consider themselves activists.

RG: It’s never about my agenda….I tell the teachers I work with, I’m not there trying to tell you how to run your classroom… you need to figure out for yourself what you stand for … and you want to make sure you’re consistent.

We have something I refer to as the mirror test, you need to be able to look yourself in the mirror and say, “I’m doing what I said I was going to do when I went into teaching” and if you can’t do that, you need to ask yourself “why?”, and “what will it take for you to get there?”

Dr. Rochelle Gutierrez is a professor of Mathematics Education and Curriculum and Instruction at the University of Illinois at Urbana-Champaign. Her research focuses on the structural and pedagogical factors involved in equity for marginalized students, especially African American and Latina/Latino students. 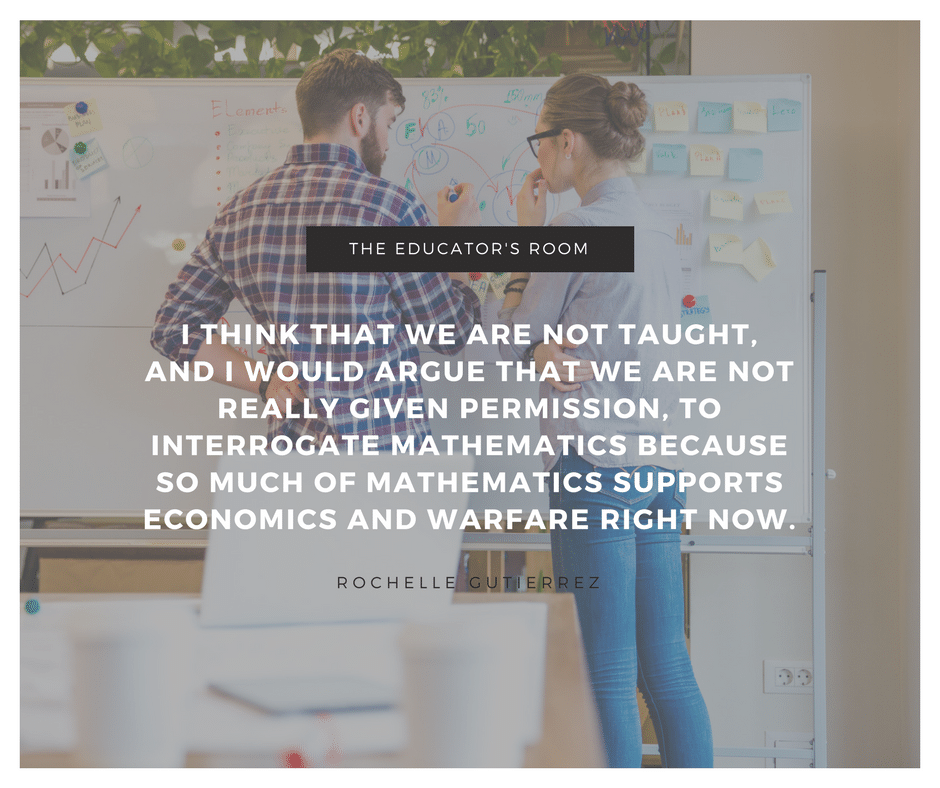 Top five reasons to go to the 2015 NCTM Annual Conference

Almost Free Math Games: Teaching with a Deck of Cards! 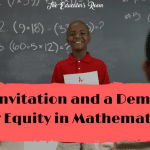 An Invitation and a Demand for Equity in Mathematics