"Why must I learn this?" is a common question asked by students. I'm never fully convinced that I answer this to the satisfaction of the class but I do try to provide both guiding questions and reasons for our global studies in a Modern World History course.  It shocked me to discover a generation of students who had never heard of Nelson Mandela.  It was a greater shock to discover that they thought he had played a role in The Dark Knight. Once we separated Morgan Freeman's acting career from Nelson Mandela, the Nobel Prize winner, I felt compelled to teach students about  Mandela's life of activism. It occurred to me that the failures of Mandela were the actual catalysts for change and thus the meaningful answer to the common question on a proactive level.

Educaton promotes historic protagonists who have risen from the masses despite the odds as a model for students to attain. But figures placed on a pedestal become unattainable in students' eyes and are then dismissed in their minds.  Over the years I have heard students comment on the hypocrisy of studying leaders who have been jailed for worthy causes yet been scolded for their own failures, detentions and defiance. How do students learn right from wrong without taking risks? The separation of right from wrong, heroism from terrorism led me to reconsider the lessons of Mandela, Gandhi and Margaret Sanger.  Allowing students to begin with a choice research question, a pathway for research and an opportunity to collectively judge each leader for themselves seemed to carry more weight. Connecting this to comparative current events has a variety of positive outcomes leading students to prepare a roadmap for just actions or to follow in the footsteps of leadership by leading a campaign of their own.

Every year I teach students who have spent time in detention or jail and or have relatives with similar hard luck. Jacqueline Woodson wrote a children's book, Visiting Day, acknowledging this cultural norm.  I never considered how many families balance incarceration, love and community in private and in the public light even though it is something my own family has faced. While incarceration may continue to be a public or private matter it is important that all students have examples of positive outcomes and a means for advocacy. The picture book presents this on a simple and possible level and I realized that the lessons of Mandela's imprisonment did have a meaningful connection to injustices that students experience.  Every year, the New York Times Upfront magazine posts articles that address the many angles of imprisonment. I bookmarked a particularly interesting article, Locked Away Forever, by Adam Liptak (link) . According to Liptak almost 10,000 Americans are serving life sentences for crimes they committed before they turned 18. Juveniles are serving life terms (with or without the possibility of parole in at least 48 states. Without reading further, this excerpt generates several minutes of class discussion. Students were motivated to download the Scholastic magazine app for Upfront and access the year's subscription.

I recently learned how to connect AirServer and my iPad through my computer to a class projector which makes sharing search patterns that much more beneficial to students. I asked the class to google Mandela to note immediate sources.  Then I share them my bookmarks made from several searches through multiple databases and focus on a BBC article. It highlights an overlooked fact that Nelson Mandela was on a US terror watch list until 2008. The ANC was not only designated a terrorist organization by the Apartheid government of South Africa but by countries around the world.  When and why this changed is what students investigate. This year I have booked a day in our library for a round robin study of incarcerated leaders and created an evaluation tool to compare struggles and the causes for which they campaigned. This segues to studying the process of activism and the model activist, Mohandas Gandhi.

I show a clip from Richard Attenborough's 1982 film, Gandhi, in which Gandhi a lawyer is thrown from a train in South Africa for the offense of riding first class. There is much discussion concerning the morality of this act and the length to which it took Gandhi to challenge similar inequities later in India. While some see this turning point as his success I see it as his most important failure. What he couldn't accomplish in South Africa was not the end to the means but the beginning of a long life of activism. I was surprised to hear a recent NPR story emphasize this similar opinion. Students have the option to take studies of reform and activism as an opportunity for organizing, presenting and processing work on a campaign. Whether the campaign succeeds or fails is not as important as the lesson learned by the student who take the risk. In the past, students began simply campaigns on Facebook or picked a day for after school rallies. Some students join school clubs or volunteer to find signatures for a petition. Small actions serve most students better than larger campaigns. I usually have set surveys for students to implement should they be at a loss for a campaign of their own design. A four question survey concerning the option of school uniforms or a survey concerning the closing of Guantanamo serves a spectrum of interests. Upfront often has timely debates that pique student curiosity as well.

Returning to Adam Liptak's editorial on the prison system reminds us that the world is not necessarily filled with bad people but choices that can be undone if opportunities exist. On the Nobelprize.org page there is a great quote which sums up the purpose of our lesson. Mandela is "... a shining example for the world that there are ways out of the vicious circle of violence and bitterness," (speech by Chairman of the Norwegian Nobel Committee Francis Sejersted) . And he is not the only shining example. I see a whole classroom of possibility. 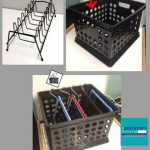 Field Trips are Better with iPads

Mobile Devices in the Hands of our Children Part 3: More Apps

[Opinion] Barack Obama: A Role Model for Teachers and Students
« Demistifying the Great Lesson
All Mathematics is Political: Post Session with Rochelle Gutierrez »