On a clear morning in late August, I entered the classroom for the first time . . . and it was time to sink or swim.

I had been a sub on and off for a few years, grabbing a few days a month in-between an office job in public relations. With my subbing experience – plus some side teaching jobs and the education classes I had been taking – I felt I was ready. Teaching was a career change for me. After some false starts I was finally following a calling (although I was still waiting for the New York Mets to call on me for a World Series run). As people sometimes say, teachers are born, not made. I felt I was born to do this. Was I right?

The summer’s end was a whirlwind. I was called on a Monday, went for an interview Tuesday, got the job Wednesday, and began work Thursday – the day teachers reported. Usually by this time a classroom is pretty well prepped for the school year, as teachers come in early to set up. This was obviously not the case for me. I went to the school bright and early Thursday morning. The assistant principal walked me to my room. About a half-hour afterwards, we were having our first meeting, but in the meantime, I could start arranging my room.

You know that gut-wrenching feeling when you’re thinking, “What have I gotten myself into?” I had it the moment I was alone in the room. I looked around and had no idea where to start. There were piles of chairs, a bunch of scattered tables, some books in a corner, and collections of various teaching materials everywhere I looked. Two days to set up in-between a bunch of meetings and then – after a Labor Day weekend as the best man at a wedding – start teaching. The administration was very supportive and offered assistance should I need it, but I knew if I wanted to really become a teacher (besides in name only) I had to figure some things out for myself.

Unfortunately, I felt lost. I needed an epiphany, a moment to put me on track. I wish I could speak about some great moment of clarity, words of encouragement, or a glimpse of some higher power nudging me to move forward . . . but there was none. In life we hope for moments of inspiration at trying times but often they don’t come, and when it's sink or swim our only hope is to push forward and find a way to swim. So that’s what I did.

“Step-by-step,” I told myself.

I stared at the room for what seemed like an eternity (it was probably 15 minutes), trying first to figure out how I would set up the tables. This has become my ritual every year. When I enter my room for the first time each August, I don’t do anything right away. I stare at the room for a while and think. I mainly think about how I will arrange my class, but it's also a moment of contemplation – about my summer; about how lucky I am to work in this profession; about the incoming class; about past years, how I felt returning and what may have been happening in my life at that time.

Or maybe I’m just using this as an excuse to stall.

Slowly I moved the tables into one position, then another, and another until I found the correct setup. Then the chairs were evenly laid out with each table. Over the next two days I spent every spare moment (when I wasn’t in meetings) setting up my room, step-by-step, inch-by-inch, book-by-book. As the second day drew to a close one of my new colleagues walked in and saw I had written something on the board welcoming my class.

“Wow, you look like you’re ready for the kids,” she said.

You Mean I Have to Teach Too?

I felt a mild shiver as I was reminded of the actual reason I was here – the kids. Soon I will depart for a long weekend at my best friend’s wedding. When I return, there is no more getting ready. It’s time to teach, and I will have a classroom full of wide-eyed students (some speaking little or no English), depending on me to guide them day after day for an entire year.

Swim was the only option. This wasn’t a project that could simply be handed off to somebody else if I struggled. These were people . . . children. Every moment counted, and a bad start to the year was not what these kids needed.

The wedding weekend was an experience unto itself, but that’s another story. Monday night I settled down and watched a movie to clear my mind for what was ahead, but afterwards, I didn’t sleep much. I was full of excitement and worry. The next morning, it was time. I picked up my students, and on a clear, early-September morning we entered the classroom for the first time . . . and so began the school year.

I am happy to say I made it through, and (I think) the school year went well. Of course, some “reformers” might find fault in some data observed at a specific angle. They weren’t there, however, for the moments and breakthroughs that really counted.

Now 10 years later, I am preparing to start a new class for the 11th time. I still have the same excitement and nervousness every time a school year begins, but I am much more prepared to handle what is coming. Still, a new year brings new challenges. There will be uncharted territory for me, whether I want it or not.

That’s the reality. No matter how prepared you may be – subbing, teaching in other programs, education classes, observing others, discussions with former teachers, practicing in front of the mirror – you are never truly prepared for the moment you take your own class under your wing. This is the joy and anxiety of anything new, and this is the joy and anxiety of being a teacher. Every year, a little more seasoned, you experience a whole new world once again.

But have no fear. As long as you find a way to make this new world yours – and figure out a way to swim before calling the lifeguard – you will succeed. Salvatore A. Barcia Jr. has been a full-time teacher since the fall of 2006, teaching 4th, 5th and 2nd grades (currently teaching 5th grade).  In the summer he teaches drumming at a day camp in New Brunswick, NJ.  He has also authored a children's book, Jerry Versus the Test. 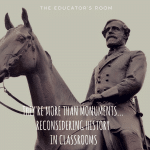 They're More than Monuments... Reconsidering History in Classrooms

Staying Within Law: Special Education Teachers and IDEA
« 20 April Fools' Pranks for Educators
On Sickness: From a Teacher who Can't Come to School Right Now »