The end of the school year -- a time of celebration for students and teachers alike!  For my son and I, it is a little different this year.  This last year was his first school year as an unschooled kid.  It has been quite a journey for us, and as I reflect on what we’ve learned through this experience, I realize that I have grown tremendously in my own understanding of what “education” is.

As a fairly traditional teacher, I probably raised my son like many other teachers: lots of reading in the home, intentions to integrate him healthily into the school system of which I was proud to work for, and guidance through various academic challenges.  But my son’s experience of school defied everything I had expected for him.  From the time he entered kindergarten, he faced really negative experiences: from being neglected because he could already read and do math, to being made into the “errand boy” of his third grade class because he finished his work early.  Through first five years of his academic experience, he lost all his love of learning, his creativity, and he was bored out of his mind most of the day.  He endured some awful bullying from kids who were bigger and more aggressive than he was, and he even went through a period where he stopped eating and speaking.  We tried private school, a magnate school for science and technology, and back to a private school.  He did much better in a smaller setting, but he remained bored and listless.  Last year, when his school closed due to lack of enrollment, we were set to sea.  We made the risky decision to try to home school.  In addition, we also found a democratic school in our town that is designed to meet kids’ needs who are unschooled or homeschooled.  He went there three days a week, made new friends, went on weekly field trips, and participated in a democratic community of students of all ages.

The first six months of our experience this last year were really what I would call “de-schooling.”  For both of us.  It was probably harder for me to adjust because I am such a believer in education and school, and my version of that was very traditional.  My son adjusted much more quickly to the freedom afforded him by not being in traditional school.  Choosing his own direction for study and spending hours and hours every day playing and using his imagination infused him with energy and creativity. As he got interested in new things (Ocean life! Writing computer games! How to build a bridge!), we found the academic basics he needed to accomplish the goals he was interested in.  Sure he learned some math – but he didn’t do rote math drills every day or worksheets of exercises.  He learned the math he needed to figure out how angles work, or how to use computer code to design a level in a game. He read a lot – but not necessarily from a book for 20 minutes every night.  He read online manuals on how to build a model tower, he read gaming code primers, he read graphic novels, and he read pages and pages of information on line about anything he got interested in.  He learned to research when he had questions.  He found YouTube videos to help him learn new songs on his piano.  He learned to bake bread and make homemade french fries.  He trained his dog to sit and roll over. He wrote stories and designed a whole new culture in Minecraft based on what he learned about what makes a civilization.

And he played.  He had so much time to play, that at first I was almost uncomfortable with it.  “He should be learning!” I thought anxiously.  “He will be behind!” I worried.  “He will forget what he’s learned!” I fretted.  Learning what?  Behind what? Forget what?  It doesn’t actually work like that, I discovered.  The stringent rules we increasingly apply to our schools and students (that now require kindergarteners to write full plotted stories with introductions and conclusions in order to meet new statewide standards) are based on a perceived lack of academic success in our school system.  The more academic pressure we’re putting on our young children, the less time they have for play and creativity, and the more they are burnt out by the time they reach high school.

As a high school educator, I have shared the frustrations about social promotion in middle school that results in freshman with only fifth grade reading level skills.  I have also struggled against a system that held back my students who should have had the opportunity to go to college by the time they were 16 because they were well ready for it.  Our industrial-era system of education continues to apply a one-size-fits-all approach to its policy, whether that means raising standards, employing “positive behavior” strategies, or setting graduation or testing requirements.  We assign the same treatment to the child who needs extra help, who sits next to the child who should be allowed to work two levels ahead than where he is stuck, who is next to the child still acquiring English language skills after years in a refugee camp, who sits next to the child whose only square meal every day is lunch at school, next to the child who…. One size definitely does not fit all.

I don’t know the answers.  There aren’t any easy ones, that is for sure.  In a country with 80 million school-aged children, there has to be an effective way to provide a free, accessible, quality education for them.  Sometimes that means proscribed methods and strategies.  Thinking outside our century of industrialized-modeled education system is difficult, and would require some pretty huge paradigm shifts for policy makers and educators.

Despite my hesitancy to remove my son from the system I do believe can be a lifeline for so many children, he has thrived.  He has matured into a responsible boy who has learned how to communicate and help younger children, and who consistently inquires into how I am doing.  He has learned he actually likes learning – so he’s chosen challenging subjects to pursue because he doesn’t want to be bored.  He has become endlessly creative in all kinds of mediums.  He plays his piano or plays outside for hours a day (when the weather permits).  He sword fights, climbs, jumps, rides his bike, and chases his dog around the yard.  He expresses what he thinks and he has thoughtful opinions.  He likes to learn new tabletop games to play with me.  It’s hard to describe the significantly noticeable changes in him to people who did not know him before this year, but I am so thankful that we had the opportunity to experiment with a new way for him to learn.  This wasn’t a traditional school year for us, so school is not actually ending this month.  He won’t change his patterns of learning, they will just continue in the same vein because they have become his new lifestyle.  I suppose that’s the key to an unschooled education: it is not a new way to school – it’s a new way to live.  For both of us.

To buy Cari's book, "How to Finish the Test When Your Pencil Breaks" please click here. 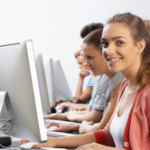 Taking the Anxiety Out of Student Placement in Special Education
« Stone Silent: Chipping Away at the Selective Mutism Barrier
Museum Education: Yes, I Get Paid For This! »