These past two weeks I had the opportunity to score the essays for the New York State English Regents. For those of who are not familiar, the Regents are cumulative standardized exams that all high school students must pass in order to graduate in New York State. There are Regents for every subject area. I took part in the scoring for the two short essays and the extended critical lens essay. There are holistic rubrics for both responses.

This year the students took the exams with pen and paper in the usual exam booklet. It was the scoring that took place in a different manner. Instead of the scorers using the same exam booklets to score, we used computers. This was done for the first time ever. Whenever you do something with technology for the first time, there is always a glitch. And did we have glitches galore.

The first day began with the usual training. There is a content specialist that is there to explain the rubrics and go over state chosen examples of each scoring level. This was uneventful as it did not have anything to do with technology. Once the training was over we moved into the computer lab. There were the usual problems such as no one knowing how to log on. Once that was all sorted out we began scoring. The way the computer system worked was a student’s essay came up on the screen and you clicked on a numerical score according to the rubric which the scorer has a paper copy of. Each student’s document was hand scanned into this computer system designed by McGraw-Hill Education. The students all took the exam in the City of New York. All the scanning was done in Connecticut. Each individual school had to pay for the exams to be shipped to Connecticut and back again. They have to then be stored in the school for two years after testing is complete. If the Department of Education had found a location in the city that option would have saved schools up to thousands of dollars.

This first day of scoring I was unable to score a single exam. Every time I tried to begin scoring, a message would pop up saying that all questions had been scored. This was of course impossible as it was the first day. This problem was occurring almost across the board at the scoring site I was at. It may have been different for other sites, I couldn't say. The following days were better technology wise, but only barely. A person would score 20 exams and then that “all scored” message would pop up again. This happened so frequently and caused so many delays that we were all offered the option to stay an hour later each day. The delays were so widespread that some students did not have their score on time to graduate. There have been reports that some students are still waiting for scores. Graduations were held this week causing some students to walk but not to receive a diploma. They were handed a post-it note instead of a diploma.

According to the New York Times, New York City is contemplating auditing McGraw-Hill Education because of all the glitches since the city paid them $3.5 million this year. This was not tax payer money well spent. If you're in the state of New York, have you experienced any of these issues while scoring Regents Exams?

Encouraging Success In Our Students

Rebels with a Clue: How Teenagers Give Respect to those that Earn it 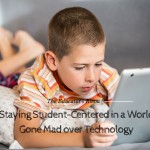 Staying Student-Centered in a World Gone Mad over Technology
« Computer Programming in the Elementary Classroom, Part 2: The Reality
Up, Up, My Friend...and Quit Your Close Reading! »