The Impact of Religion and Education

It cannot be denied that religion is a major element of culture around the world. Its existence cannot be denied, and it is a central focus in the lives of a vast majority of people on planet Earth. Religion acts as the foundation for the moral and ethical structure of most societies. It provides a rich understanding of our history and of our beliefs as humans. Religion helps define and differentiate us as people who belong to different nationalities and ethnicities. In the United States, religion and politics have had a reluctant entanglement since before the founding of the Republic. America has been a champion of religious freedom, but in seeking that goal, American culture has also evolved in ways that restrict religious behavior. The relationship between religious expression and preventing religious expression in order to protect the rights of others is the nature of the delicate balance that teachers must maintain when acting as an “agent of the state” as they do their jobs. Both teachers and students have the right to religious expression while in school, but they cannot use the power of the state in the form of the school to carry out their religious beliefs. Crossing that line brings down, as Thomas Jefferson put it, “the wall of separation between church and state.”

When I discuss religion and public education with my students, I like to joke “that there will always be prayer in school as long as there are tests in school. There will always be someone saying, ‘Dear God, help me pass this test today.’” While they might find it a little humorous, the message is real. Students have a right to pray or conduct religious activity as long as it is voluntary and does not impact the educational process. Students can read a Bible or a Koran during study hall as long as it is silent and does not impact others trying to study. Students who have special considerations such as clothing or who need a place to pray must be allowed to carry out those religious activities. As agents of the state, teachers cannot impede these activities. What teachers cannot do is impose upon students a particular doctrine or religious belief as truth. Public schools as an institution are prohibited from proselytizing or preaching a given theology or religious belief system, but they can teach about the different religions that exist around the world. Again, it is a delicate balance between imposing a state-led prayer on students and allowing students to explore, discuss, and learn about religion as an aspect of human behavior.

What teachers cannot do is impose upon students a particular doctrine or religious belief as truth. Click To Tweet

What does the Constitution say about church and state?

Congress shall make no law respecting the establishment of religion,
not prohibiting the free exercise thereof.

Read more broadly, the Framers drew upon their experience as members of the Church of England, created (or “established”) and led by the King of England, then Henry VIII, and they expressly forbade a similar structure in the United States. The government cannot set up or favor any given church, house of worship or religious belief. That’s what’s called “Establishment.” Schools are funded by taxpayer money, so they are subject to restrictions outlined by this part of the Constitution, known as “the Establishment Clause.” Nevertheless, anyone under the jurisdiction of the US Constitution cannot be prohibited or restricted in their religious expression. That’s what is meant by “the free exercise thereof.” Of course, every right or freedom has limits. Religious expression cannot break other existing laws. (Polygamy is illegal. So is the use of mushrooms in Native American religious ceremonies, for example). These and other restrictions on religious expression have been upheld by the Supreme Court.

The Supreme Court has had to deal with the question of religious freedom in the schools during the second half of the twentieth century up to the current day. Before the passage of the 14th Amendment in 1868, the First Amendment was applicable only to actions of the federal government. The Fourteenth Amendment brought about a concept called “incorporation,” where piece by piece, parts of the Bill of Rights became applicable to state action. (First Amendment School, available, 2018) Still, schools were permitted to enforce both prayer and Bible reading up until the landmark case of Engel v. Vitale (1961), which ruled that state-led prayer (such as those led by schools) were a violation of the First Amendment’s Establishment Clause.

Since that time, one other Supreme Court case has provided guidance to schools as to what is permissible or prohibited under the Establishment Clause. In the case Lemon v. Kurtzman, (1971), justices developed what has come to be called “The Lemon Test,” which consists of three questions:

The evolving role of religion in public education

After state-led prayer in public school was banned, many instances where religion and government intersect have arisen, resulting in a variety of court cases but also in an unclear set of guidelines for teachers, administrators, and students to follow. In my school’s state of Virginia, we begin every school day with a moment of silence. This action is symbolic of the fine line between religious freedom and state-imposed belief. It passes the Lemon test because the ostensible purpose of the moment of silence is to give students as chance to focus before their school day begins. But students are reminded that if they wish to engage in silent prayer during that time, they have that right. The government, in the embodiment of the school, appears to be neutral in respect to religion because no specific belief system is promulgated or favored by the activity. It therefore avoids “entanglement” with religion and allows students to exercise their rights without imposing a given religious activity or belief.

My own students often point out that there are numerous examples where the government seems to be supporting the idea of God or religion in spite of the constitutional prohibitions against them. Every day, students say “under God” in the Pledge of Allegiance, but they aren’t forced to say it. Our coinage and printed money have the national motto “In God We Trust,” though it used to be “E Pluribus Unum,” a reflection of both our federal system and our nation’s diverse makeup. Both examples stem from the need for American culture to counter “godless communism “during the Cold War. Our two houses of Congress have chaplains that start each legislative session with prayer. These intrusions of the sacred into the secular are examples of “civic religion,” and for the most part, they are respected and left alone. If the state imposes too strong a religious ritual or symbol, such as the display of the Ten Commandments in a school hallway or courtroom, the Supreme Court has moved to counteract such overreach by the state.

The Supreme Court has ruled that religious groups may hold activities before and after school as long as all religious groups are given equal opportunity and no religious group experiences discrimination (Good News Club v. Milford Central School, 2001). This decision may prove problematical for communities when less popular religious such as atheists or Satanists ask for equal time in the use of public facilities.

Almost every school system has some mention of the world’s major religions in its world history curriculum. Many have specific courses on the subject of comparative religion, and some even have English courses that come under the title of “The Bible as Literature.” These curricular examples show that school systems may teach about religion, but they must take pains to make sure teachers are not teaching religion as one specific true faith. Once teachers begin to insert their own religious beliefs into their classroom content, they have crossed the line into trying to convert their students. The same prohibition exists in the political sphere: teachers of social studies must keep their own political affiliation and opinions under wraps lest they influence young minds away from making independent decisions about politics and government. The problem has a less clear answer if a student directly asks a teacher what they think about God, creation, cosmology, and eschatology. A teacher may feel pressured by his or her own faith to be truthful, otherwise they may feel as though they are denying their own religious faith.

Religion in the schools: striking a balance

Religion, like politics, strikes close to the home of the American psyche. Religion adds a deeper dimension to our existence, and it strives to answer the cosmological questions that science is unable to answer. The tension between religion and public education goes all the way back to the 1925 Scopes Trial, where the famous lawyer, Clarence Darrow, defended the Tennessee science teacher, John T. Scopes, against the fundamentalist ideology presented by the American statesman William Jennings Bryan, that evolution should not be taught as science in public schools. Since then, even the question of teaching of “intelligent design,” the idea that God set the universe in motion and that science can ascertain this as a fact, has been ruled as unconstitutional in the 1987 court case Edwards v. Aguillard.

Jefferson’s idea of “the wall of separation of between church and state” as embodied in the Constitution’s First Amendment continues to stand strong, but it has taken hits that have weakened it as public education strives to become a marketplace of ideas where religion can be found as a topic within the curriculum. Students need to know what religion is, what forms it takes, and its impact on human existence, but they still must go elsewhere to decide if they want religion and faith in their own lives. As long as the Constitution applies to public schools as vanguards of the state, students will have to turn to institutions such as places of worship, the family dinner table, and mass media in order to find the deeper answers to questions of faith, God, and morality. 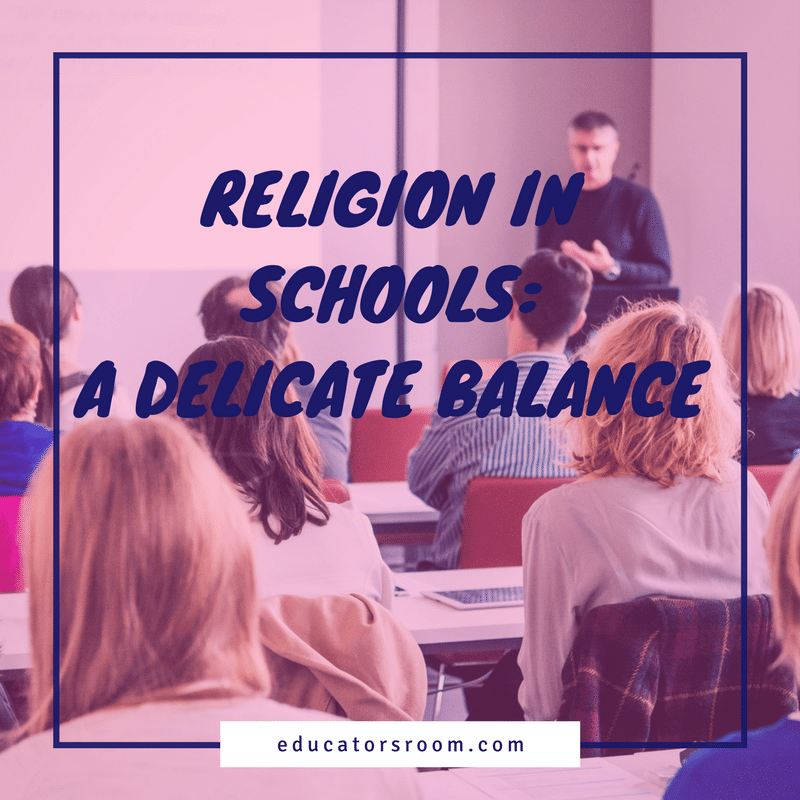 [Opinion] Barack Obama: A Role Model for Teachers and Students
« Is 2018 the Year for You to Teach at a New School?
Consider the Word 'Respect' »