Late one night, a young black teenager walked home from the corner store. He was dressed in the clothes popular to teenagers at the time, and though he missed his mom back home, he was having a good time visiting with family.  As he walked home, he thought about what they’d do together tomorrow.  That boy never saw his mother again because he was confronted and killed by a white man who accused him of crimes he’d never committed.  He could not adequately defend himself and he died at the hands of vigilantes who saw only the color of the boy’s skin as reason enough to condemn him.

That happened in 1955.  The boy was Emmett Till, a teenager who was brutally beaten, tortured and murdered in Mississippi by white men who were empowered not only by the laws at the time, but by society’s racism and their own privilege.  There was nationwide anger and reaction to Emmett Till’s murder, and his mother never gave up campaigning against the bigotry that created the conditions under which her son could be so callously murdered.  After the trial of the men who killed that young boy, a jury took only 67 minutes to find them not guilty.  There was no justice for Emmett Till.  Slowly, the laws were changed, and Civil Rights and Voting Rights protections were made federal and state standards.  Efforts began to return a balance of opportunity and outcome for African Americans in a society that for over 300 years had institutionalized racism and discrimination.

Fast-forward almost 60 years.  In an opinion striking down that same Voting Rights Act of 1965, Chief Justice John Roberts declared that the conditions that created the need for the original Voting Rights Act no longer “characterized” society today.  Less than two weeks after that decision, a man went on trial for the killing of yet another black teenage boy who was simply walking home from the corner store, wearing the popular clothing of the time, thinking about his visit with family and talking with a friend from back home on his cell phone.

On July 11, 2013, George Zimmerman was acquitted of the manslaughter of Trayvon Martin. Trayvon’s last night on earth does not need to be rehashed here.  It is difficult not to feel the injustice of a system that allows his killer to walk free (and to continue to possess a weapon he can carry around in public).  That system has been in place for hundreds of years – it was not built to advocate for boys like Trayvon.  It was built on a legacy of slavery, discrimination and white privilege.  Americans of all races took on the system throughout the 20th century, and while its legal tenants have changed, the behavioral DNA of the discrimination entrenched within it still lives.  It is clear that 58 years after Emmet Till’s murder, other black boys can still be killed simply because they are perceived as “suspicious.”  We clearly have more work to do.

As educators, we must ask ourselves a deeper question: how do we teach, model and advocate for justice and not perpetuate this same system of privilege that creates situations like Trayvon’s death?  Zimmerman’s attorney said something very striking after the verdict.  He declared that what had happened was a “tragedy, but not one that George Zimmerman was responsible for.”  THIS is where we must intervene as educators on the side of justice.  Indeed, George Zimmerman was legally found not guilty, but the events of that night were in every way his responsibility.  We must be teachers who are unafraid to confront the privilege that allows the perpetuation of Zimmerman-like thinking.  There was nothing – nothing – that could have ever justified the way Trayvon died because from the moment Zimmerman began to stalk him, a corrupted culture of bigotry, gun violence and presumption of privilege carried the day.  We are all responsible for that culture.

The reality is that hundreds of thousands of our students live endangered lives.  Even if those young people are not in our classrooms, we must not only acknowledge that reality to our own students, but we must model what it means to take responsibility for our actions, and to think and act outside of the white privilege that has shaped our society.  There are teachers in this country who must consider, like thousands of parents, that some of their students could be harmed or worse because of the assumptions of bigotry and the empowerment of gun violence.  How do we counteract what often seems inevitable?   There are no easy answers.  But we must start by acknowledging that this bigotry and negative empowerment exists, and we must actively stand in the way of it.  This is not about a right to defend yourself with a weapon.  This is not about your belief that other people “have it hard” even if they aren’t young black men.  This is about the bigger picture: the culture we have created for ourselves where anyone thinks they have the right to target someone because they make racist assumptions.

Why did George Zimmerman believe he had the right to stalk and confront Trayvon, to accuse Trayvon of something nefarious, and to kill Trayvon with a loaded gun Zimmerman had strapped to his waist?  What cultural and political permission have we given to our state and local governments to allow laws that protect this kind of behavior?  We must not just actively teach our students to recognize discrimination; we ourselves must find ways to actively turn it around. It is the responsibility of every one of us: Trayvon Martin did not die because he was Trayvon Martin.  He died because he was a black boy walking home in the dark wearing a hoodie, and when confronted by a stranger he tried to defend himself.  That stranger would have stalked and confronted a black boy walking home wearing a hoodie if it hadn't been Trayvon. That is on all of us.

At the trial of Emmett Till’s murderers, Emmett’s mother, Maimie, testified that before he’d left for Mississippi, she’d warned him to behave properly and “should an incident arise where there would be any trouble of any kind with white people, then it got to a point where he even had to get down on his knees before them, well, I told him not to hesitate to do so... I told him to be careful how he walked in the street at all times.”  We thought we had moved on from mothers having to warn their black sons about how they walk in the streets.  It is unacceptable that in the wake of Zimmerman’s acquittal, that is one of the messages our young people are once again getting.  It is part of our role as educators to stand relentlessly in the way of a culture that communicates that the color of someone’s skin is still reason enough to presume they are guilty.

We should not be thinking of how to get young boys to stop wearing hoodies and not walk “suspiciously” so that no one thinks the worst of them.  We should be making a society that does not think the worst of them.  The unending speculation on cable news shows of inevitable “race riots” and violence in the wake of the acquittal just add further evidence to the embedded racial thinking that underpins how we publicly discuss events like George Zimmerman’s trial.

It can’t be said better than what Jay Smooth, founder of New York’s longest running hip hop radio program, tweeted the night of the Zimmerman acquittal: “The fundamental danger of an acquittal is not more riots, it is more George Zimmermans.”

Undoing centuries of entrenched racism is no easy task, but we all have skin in this game (so to speak).  It’s on all of us to change this culture.  And as educators especially, we have the crucial task of offering our students alternatives to entrenched discrimination and racially presumptive thinking.  We have to see beyond even our own cultural upbringings and, sometimes to our own privilege, and understand that behavior like Zimmerman’s will not change unless we make it unacceptable in our society.  Of the many lessons we must learn from this horrible event, one that re-emerges time and again, is that our culture won’t change unless we actively change it.

Justice Roberts was wrong in his Voting Rights Act decision this summer: the conditions that created the need for such a law do still exist.  Three hundred or more years of institutionalized racism doesn't just stop after 50 years of trying to correct it.   It is our responsibility to continue the work of changing our society and continuing that correction.  And that will take lifetimes of commitment.  Are we willing to invest in that kind of effort, or will we find ourselves in another 50 years mourning yet another black boy killed because of how he looked walking home from the corner store? 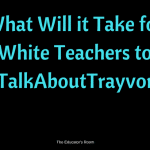 What Will it Take for White Teachers to #TalkAboutTrayvon?

What Am I Thankful For? A Damn Good Public Education
« The Educator's Room + Whitney Kaulbach Discuss 1:1 iPads for the Classroom
Graduation! (Charter School Diaries #25) »