October 14th was Columbus Day this year. I remember that as an elementary student in the late 80’s/ early 90’s, we would do little projects about Columbus and his ships, the Nina, the Pinta, and the Santa Maria. My parents have a drawing my younger sister did in 2nd grade of Columbus showing the new world he discovered to two characters she created. It’s a really well done drawing (she was eight at the time) and a cute story. Of course, as children, we didn’t know a lot about Columbus. Unfortunately (or fortunately,) as I grew older, I found out more about Mr. Columbus and let’s be honest, it leaves a bad taste in my mouth.

I was first introduced to Columbus (the villain) in high school. My World History professor didn’t really go into detail about him. Another thought that there were more important people to discuss. When I became a Social Studies teacher, my first class was World History. Many of the teachers at the school I taught for had adopted the policy of debating Columbus as a hero or villain. It helped the kids develop their critical thinking skills while allowing us teachers to not have to defend or vilify someone.

Now, it is hard for me to not to bash the man. Let’s face it. He was not a good guy, but my role as a teacher was to facilitate discovery and allow students to form their own opinions. Sometimes it is hard to just do that and not inject our own views. I know that tide is changing. A teacher I discussed this with said his students still debate it. Some teach him as a straight up villain.  Others choose to ignore him and focus on other historical figures like Amerigo Vespucci.

I understand any view of teaching Columbus in school. But, the reality is: we shouldn’t ignore him. His arrival in the Americas is important.  This event started a tidal wave of change, exploration, conquest, and colonial domination that would change the world. Students must understand that.  Debating teaches students the important skill of perspective: having to defend the actions of someone they consider a villain stretches students' critical thinking.

I think the days of coloring pictures of ships, singing little songs, and doing other fun projects on Columbus Day are gone - as well they should be. Should there be a holiday? No. Let it just be a part of Fall Break. Should we ignore Columbus? Absolutely not. We have to teach the positive and negative parts of history no matter what. 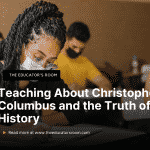 Where Are You From? Connecting Students to the World
« The Veterans of Education Matter
The New Teacher's Survival Guide: Planning Meaningful Lessons »