Last night I was flipping through old photo albums, reminiscing about my first years in teaching which seem so sunny and bright. I know that I have gained efficiency, patience and organization since I first began.  Yet forced changes in education have me questioning my confidence and expertise. Change insinuates that everything I have been doing was somehow wrong. Or it means that the vision I have promoted is suddenly coming to fruition.  I often regard warily those who institute change because they are likely to move on in their careers without looking back. It makes sense to turn some attention to the veterans of education who still arrive to work with smiles, take on new challenges and converse without cynicism.

These veterans of education have also been coaches who  took me under wing when I was still a high school student. I adored them as individuals could not tell you where coaching began and where the teaching ended. They devoted endless time to us. Later, under their tutelage I began my career with them, drinking coffee late through nights, designing lessons and fun activities. I learned how to fund athletes without a budget and to praise students brave enough to ask questions. Our mantra was, "triumph is just try with a little umph."  Many of my mentors, coaches and fellow educators are closing the gap on 30 years of education. I honor their integrity by collecting stories and accomplishments through interviews.

This first interview starts with Fred Griffin. I met him when I was racing for Rossignol Nordic and coaching a high school girls team in Stowe, Vermont. I had no experience except for my own fond memories for what my high school coach had inspired in me. Vermont has long winters and great skiing but the pool of Nordic athletes attending collegiate or national level competition was incredibly small. Private ski schools tended to dominate and the expense of skiing kept many athletes away from the sport. Fred helped launch a New England Nordic Ski Association (NENSA) to provide a social network for all skiers young and old. Through NENSA I received coaching instruction from Olympians and other prestigious athletes. I learned how to navigate the rules and regulations of national competition. I brought public school skiers into racing and developed a championship level ski team. Throughout the experience, Fred provide guidance with a focus on the importance for the love of learning. Recently, I took up coaching cross-country running and was invited to a costumed race at the neighboring school. Of course Fred was the mastermind behind this event. More than 700 runners had showed up in elaborate costumes that they wore over the terrain of a 3 kilometer relay course. I realized that it was time to understand the story of  this man who long ago inspired me to devote my life to working with kids.

Fred Griffin began teaching in 1973-74 but  explored careers as diverse as farming, writing, grocery store management, and building contracting. He returned to teaching after pursuing a Masters at Dartmouth.  Currently Fred is completing his tenth year as an English teacher in Fairfax, Vermont after experiences teaching drama and special education. Coaching was always part of his repertoire. He began ski coaching in 1988, assisted in running and started a girls' tennis team. In 1994, Fred started NENSA and became the executive director a year later. His wife's ministry gave them opportunities to move throughout New England before settling in Fairfax.  Fred turned a ski club into a ski team and added girls' ultimate as a spring sport.

What is it that you do that inspires students to want to engage?

It starts with the teacher. Individuals will come in passionate about a class, but they are few and far between. When a teacher loves what he/she is doing, loves the material, loves the kids, it is infectious. Exuberance is contagious.

In other words, what do you believe is your gift that you bring to teaching?

I make the classroom fun. Kids say my class flies by. They say they never know what to expect, not in terms of material under study, but the way it is presented, or the theater I bring tp the classroom. Yesterday we began class by playing eggplant baseball. One fearless child held it by its stem and I exploded it all over the floor, walls, etc. Then we settled down to work. Unorthodox, yes, but fun. Learning can be, should be fun. Creativity has to be part of the curriculum and part of the class room protocols

What change in education/ coaching really helped make a difference for the greatest number of students?

Hmmm... I know I like block scheduling because I see the kids longer, have a 80 minute block of time to be able to read/write/discuss every single block . My years in voc ed taught me that unless applied, virtually daily, learning has little traction. We have lab of some sort daily

What method of teaching has consistently helped more students succeed?

Removing the "front" of the room; ending lecture, empowering kids, allowing them to collaborate; digital tools aid in this. Every child in Fairfax has an iPad. Research papers are no longer text researched, but video, photos, music..anything relevant to the topic in addition to words must be drawn in to create a multi-disciplinary presentation instead of mere text. The ability to do this transforms education

If you could have more of anything what would that be?

Hours in a day

Can you describe an outstanding moment in the history of your career?

Whenever I have made something that didn't exist before I was there. NENSA, two running teams in two different schools, One tennis program, one ski program, a drama program, a 4K set of woods trails, an Ultimate program. I gave them life. They are my children.

What does it take to help every student succeed? 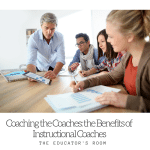 Coaching the Coaches: the Benefits of Instructional Coaches

Supplemental Education and the New SAT: Part 2
« Trick or Treat! Tolerance in Public Schools
Say No to Columbus Day And Yes to Indigenous Peoples' Day »