I cannot believe I'm saying this, but teachers have begun proctoring standardized tests, and many more will do so in the coming months. This Presidents' Day, I am sending this petition to President Joe Biden and other government leaders of education. Please support by signing and sharing with others.

American K-12 students should be granted a waiver for and NOT be required to take standardized tests in the 2020-21 school year for the following reasons:

1.Students mean more than data - Michigan Education Association President Paula Herbart states, “Mandated standardized testing does not provide educators the data needed to meet individual student learning needs in real-time, which is what we need to be laser-focused on right now.” Additionally, Scott Marion, executive director of the National Center for the Improvement of Educational Assessment, noted "bad data is worse than no data, because people will still make decisions on bad data."

While current figures were not available, standardized tests cost American school districts $1.7 billion in 2012, a number that has almost certainly increased. Click To Tweet

2.Waste of resources - While current figures were not available, standardized tests cost American school districts $1.7 billion in 2012, a number that has almost certainly increased. Spending this amount of finite resources on a product that will almost inevitably show students' struggles in the last calendar year is a true waste of taxpayer dollars that could be better spent on supporting students through measures like after-school programs, guaranteed food security, and more. In 2017, State Senator Andrew Dinniman estimated Pennsylvania spends "$80 million a year to test [and] $1.3 billion over the last eight years." Those are the figures from just one state. Rob Miller, Superintendent of Bixby Schools in Oklahoma, said it best in his February 9, 2021 article: "The last thing our children need to deal with this year is the added anxiety of having to prepare for and take a series of state tests that will benefit no one other than testing companies and entities seeking to disparage teachers and schools."

3.Accessibility gaps in education - Only 73% of students have regular Internet access at home, and 9 million students have no Internet access at all, greatly impacting rural and urban home learning environments and the students the standardized tests will score. Low-income students are less likely to receive regular instruction than their wealthier peers. Additionally, studies of educating Black, Indigenous, and People of Color (BIPOC) students in the pandemic have shown approximately 70% of these students receive some regular instruction, while 20% receive no regular instruction at all. This was a problem before -- but is certainly exacerbated by -- COVID-19, and legislators have been lacking in addressing it for decades.

4.Testing compounds student anxiety + the mental health crisis - Increased depression rates are what has caused the Center for Disease Control to accelerated the reopening of schools.  The rates of depression and self-harm were soaring prior to COVID-19, but those rates are increasing due to the loneliness from the pandemic. Forbes Magazine reports only 42% of students believe their schools are doing "their best to create an atmosphere of physical and emotional safety." Though far too low for comfort, this is actually an increase from 2019, but it is easy to predict that trust will tumble once students are run through the wringer of standardized testing. As Anthony Cody of Edutopia writes, students will suffer a reduction of individual self-worth and school-wide morale once their scores are reported.

5.Testing data does not diagnose (or fix) system issues - Perpetual student absenteeism has increased approximately 10% across the country, and there are growing numbers of "phantom students" that cannot be located, let alone properly educated -- or tested. Education advocates like Peter Greene and many other elected officials feel there are reasons to "give the big test" to locate these lost students and hopefully gather data to plug the problems we are facing in the pandemic. Has anybody stopped to consider that this data usually does not get compounded until September or October? How will that drive our educational decisions?

Which leads to this question: What teacher in their right mind gives a test they know their students will fail? Just to collect the data? We must be better than that.

6.Lost instruction time - Students spend about 20-25 hours annually on testing; this time could be dedicated to the decreased amount of time of direct instruction and live learning, which has been already reduced by most schools to accommodate for the difficulties of teaching in a pandemic. Many students in Pennsylvania will spend more time taking tests than those seeking to pass the legal bar exam. Juniors in Indiana are currently taking the ISTEP (Indiana Statewide Testing for Educational Progress), and, in a friend's school, this has led to students in other high school grades staying home while all the remaining high school staff directs their attention to proctoring the 14 hours needed for the 11th-grade students. Testing time continually comes at the expense of instruction. The idea of moving forward with testing during a pandemic just as real in 2020 as it was in 2019 (when waivers were also granted) is confounding.

7.Testing does not reflect student achievement - An American University study revealed that standardized tests do not properly reflect upon how much students know, only how much time they can dedicate to improving their abilities to take tests (266% more for wealthier students, according to Penn State University). To offset this, teachers and districts of students without the means dedicate an extraordinary amount of class time to "teach to the test." Additionally, students with busy homes filled with parents, siblings, and other family members who are trying to work or simply contribute noise -- in small spaces not equipped for a sustained amount of time to work on standardized tests -- will ultimately fail.

8.Lack of resources for safe, secure, + uniform tests - Michigan State Superintendent Michael Rice has said the distractions and disparities are too great to proctor the tests at home, thus placing the onus unfairly on schools to bring students in. This responsibility will complicate schools' COVID-19 mitigation efforts by indirectly encouraging schools to maximize time for students to be present at school and minimize cleaning and other safety measures. Students will also feel compelled to come to school if/when sick -- if only to complete their testing requirements. In addition, teachers in many states are not being prioritized for vaccination. Finally, strict measures to conform to and uphold the ethical and security standards -- limiting and eliminating student cheating and/or educator crimes of corruption -- are at risk due to the complications of testing this school year.

9.Unresolved equity issues - Uniformity of instruction has been more varied in 2020-21 than ever, as 20% of students being regularly taught in-person, 33% fully remote, and 47% under a hybrid model. Additionally, most after-school tutoring, classroom volunteers, and other support activities have been curbed or cut by schools across the nation. Still, there will be "accountability" proponents who will try to weaponize this data to justify their preferred outcome, whether it be gutting public schools, going to battle with unions, or outsourcing instruction.

10.The school staff who support struggling students are often the facilitators of standardized tests - Just when students need their school counselors, psychologists, administrative assistants, and principals the most, they will have less time to aid them. That is because, in many schools, those who are not regularly scheduled to meet with students in structured classes are often forced to take the lead on standardized testing. Instead of meeting with struggling students, they will spend countless hours creating schedules for students, proctoring locations for staff, and placing stickers on booklets.

12.A national imbalance across the 50 states - California, Georgia, Michigan, South Carolina, and others have petitioned the U.S. Department of Education, while others plan to continue with standardized testing as planned. That creates an imbalance and unfairness for students in states who are not advocating for them.

It is for these reasons - and more - that I sign this petition to encourage the following federal officials to provide a waiver for and suspend standardized tests for American K-12 students in the 2020-21 school year: 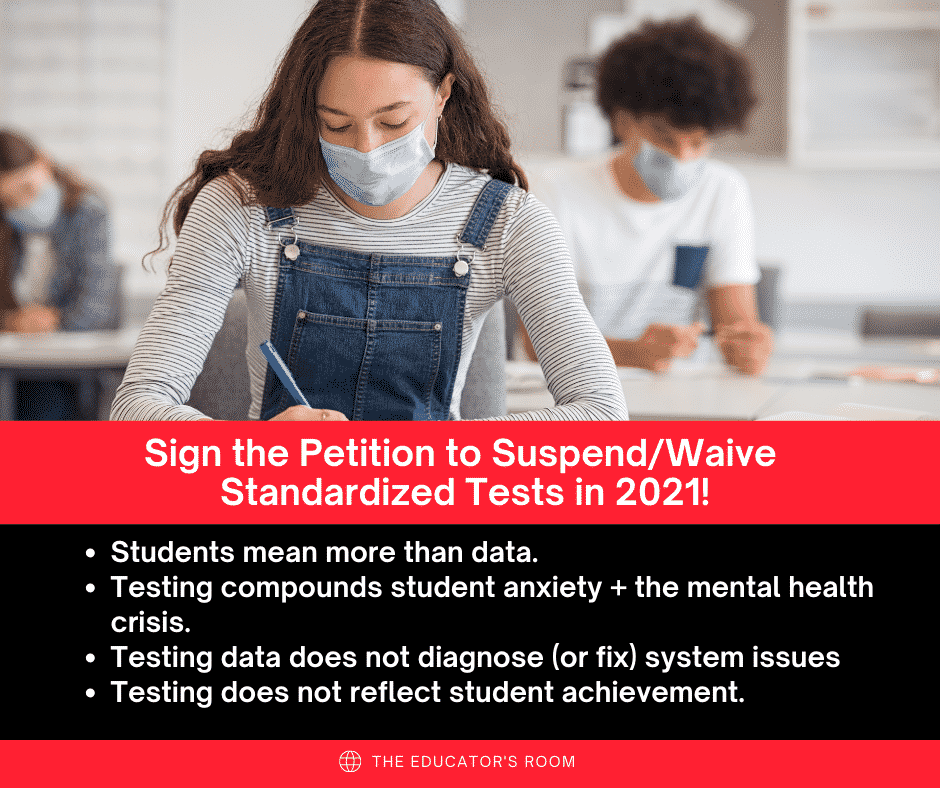 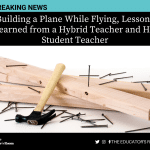 Building a Plane While Flying, Lessons Learned from a Hybrid Teacher and His Student Teacher 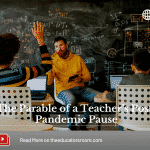 The Parable of a Teacher’s Post-Pandemic Pause

Let the Pandemic be the Mother of Innovation in Schools
« Teachers Gave All They Had And That Wasn't Enough
Opinion: Insurrection on a Black Educator’s Soul »