In my younger years I yearned for a life where I did not have to worry about how I would provide for my kids. I wanted a life where I could provide a safe, stable environment for my  family and enjoy the life I saw on The Cosby Show. So I did what all kids from the 1980s were taught to do- I graduated from college, started in the workforce and worked my butt off for social mobility. Three kids later and a fruitful career in education, I should be able to say that I have  made "it".  I no longer worry about where I will sleep or where my next meal will come from-seemingly the ills that I witnessed as a child growing up in poverty do not  bother me in my “new life”.

However every time I turn on the news, I’m reminded that despite my ability to “pull my self up from my boot strings”  there are societal ills that “jar” me back into the reality of not only being a woman of color, but raising two young men who will face this world as young African American men. I have tried to have the liberty to ignore what's going on in the media and live my "perfect" life, but constantly I am faced with news that makes it difficult for me to sleep such as:

These cases take make me look beyond my "perfect" life and realize that while my world is calm many of my students live a totally different life. As an educator, mother to two boys and social activist, I do not have the privilege to act unconcerned. It is my role to allow my kids to verbalize their feelings on these issues- no matter how r polarizing the issue may be to some.

So last night after the decision to not indict the police officer  in Eric Garner’s case, I sat my son down and had the same talk I had with my son after George Zimmerman was acquitted for murdering a teenager, instead this time  I cried when he asked how could someone be on camera murdering another human being and still not be prosecuted.  Through my tears, I explained to him the importance of speaking out about injustices and to remember that with the truth comes responsibility.  Later that night as I laid in bed, I watched social activism unfold via my Twitter  timeline using hashtags (#blacklivesmatter , #ericgarner, #livingwhileblack, #icantspeak and #crimingwhilewhite ) detailing the protests occurring all over the country. I knew that  many of my  students would ask me my opinion about the lack of indictment and I wanted to be sure that I gave them the space to discuss what they were witnessing on social media and the news.

When I walked into school today, I spoke with my colleagues about the importance of addressing the social unrest happening in our community and honestly what’s the next step for students who are very familiar with all of the situations that happened to Mr. Garner, Mr. Smith, Mr. Brown and the countless other brown/black lives ended too soon. We talked about all the emotions this case brings up for teachers working in urban schools and the best strategies for using current events to teach students how to advocate for themselves. We agreed that conversations around social injustices should not just be onetime occurrences, but we must intertwine them in everything we do-especially since our students need time to look at what’s happening around them not only from an emotional viewpoint, but also a factual one.

In the classroom, I honestly spoke to students about how to channel their anger and how to exact change in a way that would make them unstoppable in the eyes of injustice. I watched these students as they connected the social injustices happening around them to the grander scheme of things. I listened to kids as they connected the events of today to texts like Frederick Douglass and his quest for knowledge and how ultimately to change the injustices they witness to seek knowledge in all aspects of their life. Students connected their need to seek knowledge in everything they do- from appealing a grade to how they conduct themselves in class. In the end, it felt good for kids to seemingly “get it”.

As I sit tonight and reflect on the world and my feelings of anger and despair,  I think more about the quote by Martin Niemöller,

First they came for the Socialists, and I did not speak out—
Because I was not a Socialist.

Then they came for the Jews, and I did not speak out—
Because I was not a Jew.

Then they came for me—and there was no one left to speak for me.

All throughout this country student activists are being awakened to a revolution about social injustices happening here in Mexico, North Korea and all over the world I know that the revolution will be televised and I have to use my classroom as a discussion board for these events.  Hopefully in the future, I will see more teachers and educators advocating for change- unafraid of the consequences of the activism.

In the words of legendary rapper, O’Shea Jackson, today was a good day. 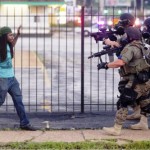 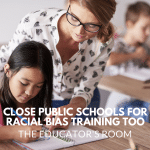 What Schools Can Learn From Starbucks: Close Public Schools for Racial Bias Training Too
« What's the Difference? IEP vs 504 Plan
R-E-S-P-E-C-T... Show Some »