We cannot help but return to school with heavy hearts and confused minds over the events that took place early last month in Ferguson, Missouri. And yet we should not be silent about it in the classroom – for the good that can come out of this is the opportunity to demonstrate for students the injustices and inequalities that still perpetuate in today’s America.

We should take a lesson from the teachers in Ferguson, who themselves have been taking the time to debrief their students of the events and seek to instill empowerment. These events, of course, are not isolated: they result from how we have set up a variety of our social structures within the histories and daily realities of racism. It is important, then, that we teachers address these concerns with our students so that they, too, can have a more mature understanding of the events, and become empowered to change the system for the better.

Last week I devoted two class periods to the subject, specifically police militarization. On the first day, students analyzed a variety of sources via a metacognitive log, which guided students through the process of source corroboration and position-taking (this is a beefed-up double-entry journal). We did a Socratic seminar on the second day, where students engaged in an academic dialogue around the guided question, Should local law enforcement have military-grade equipment?

Going in, I did not know how my students would respond to this topic. Police militarization and experiences of racism seemed like a hit-or-miss for my suburban students, most of whom benefit from white privilege. Yet the subject is so important – so important – that I was not just going to ignore it. And yet, throughout the two days, I was so surprised by the level of engagement and the maturity of the discussion. Students were staying after class to share ideas and other news stories; they were asking deep questions; they were becoming empowered change-makers who identified a problem that needed fixing, even though they themselves do not see a tank rolling down their street – at least today.

Teaching about the events in Ferguson is necessary, but it’s also overwhelming. Here are the resources I used in my classroom or supported my own inquiry:

The New York Times put together an interactive map that breaks down by county where the military-grade equipment is going. The main map aggregates all data and unsurprisingly shows most of the US’s police departments in possession of something, but subsequent maps filter by equipment type: aircraft, armored vehicles, body armor, grenade launchers, night vision, and assault rifles. This is a great visual for students, and also provides the opportunity to model the processes of comparing and contrasting between different maps and drawing conclusions from data. During the Socratic seminars that took place in my classroom, these maps were the most commonly cited form of evidence students used to support their claims.

Video clips are especially useful in teaching this topic, as visuals and news footage help convey to students the experience and severity of the events. This clip of John Oliver’s HBO news commentary show This Week Tonight does a great job summarizing the present situation of police militarization (I started at 6:49). He identifies the root of the problem as most of the police officers in Ferguson see the people as “animals,” and that mindset is only exemplified with the power-trip of “big toys.” Al Jazeera America also did a special episode of Fault Lines entirely around Ferguson and police militarization. And of course, Jon Stewart and Stephen Colbert (of Comedy Central’s The Daily Show and Colbert Report, respectively) have their commentaries as well.

Image analysis can be really powerful here. My students reacted strongly to this image of a Ferguson resident holding up his hands while camouflage-dressed police aim weapons. There’s also this one of the police in riot gear, and this one of police aiming more weapons. (Each of these links also connect to interesting articles on the subject for which the images were used.)

To engage in more of a debate, I wanted a resource from the side of the police. This article from Stars and Stripes does a great job explaining the Defense Department’s 1033 program (which supplies military-grade equipment to local law enforcement), as well as the logic behind why this program is in place today. It’s a great piece to build background knowledge and “even out” the discussion.

Huffington Post’s police militarization tag has a bunch of news articles, as well as commentaries and opinion pieces. A gem is Stephen Downing’s “The Militarization of American Policing,” which goes through the historical inception of 1033, and then connects to how it’s been taken to an extreme in Ferguson and elsewhere.

Marcia Chatelain of The Atlantic compiled a “crowdsourced syllabus” of materials for teaching about Ferguson in terms of race, African-American/civil rights history, children’s books, community organizing and activism, educational issues, personal reflections, social media hashtags, policing, and race and violence. The list “was compiled by a community of teachers, academics, community leaders, and parents,” and includes an extensive quantity and variety of sources.

Also regarding police brutality, Showing Up for Racial Justice put together a Police Brutality Action Kit, which includes resources to teach the subject, as well as short-, medium-, and long-term actions white people can take to effect change. This is a great way to show (white) students how they can get involved in these issues and not remain silent.

Because remaining silent doesn’t work – it just perpetuates social inequalities and closes you off from speaking your truth. Teacher and slam poet Clint Smith says it best in this four-minute TED Talk: “We spend so much time listening to the things people are saying that we rarely pay attention to the things they don’t.” Don’t be silent about issues of injustice in your own classroom – after all, it would be a shame if your students remained silent themselves.

Who in the Hell Would Want to Become a Teacher?

"I'm Not an Educator, but I Portray One" Experts in Ed Reform 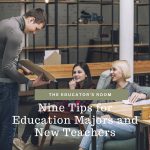