Over the past few weeks the phrase “#me too,” has appeared countless times on different social media platforms. This movement, spurred by the sexual misconduct allegations against Harvey Weinstein, a powerful producer in Hollywood, spurred millions of women to share their own stories of sexual harassment and abuse by men throughout their personal and professional lives.

This movement thrills me for some reasons, and in the same breath, it scares me. I get excited to see girls standing up and saying "this is what I’ve been through, it’s not okay, and I’m not going to be silenced about it anymore." It scares me because as our students gain the strength to come forward, and begin to share their stories, I have to ask myself, are we, as teachers, prepared to listen, acknowledge, and enforce the necessary changes in society, beginning with our classrooms and schools? For a long time, teachers have reacted to sexual harassment in schools with a dismissive attitude, accepting the behavior as something that is normal, or to is expected, in schools. We are talking about making a major change to the way girls (and boys too) are treated every day. This is going to be a huge battle, especially when you take into consideration who our current president is and his background with women.

are we, as teachers, prepared to listen, acknowledge, and enforce the necessary changes in society? Click To Tweet

Sexual harassment is ingrained in our society. I can recall the first time I was whistled at by a grown man in my bathing suit - in third grade. It happened in front of my parents, and not a word was said. Sexual harassment starts young, and from a young age, girls are expected to accept that this is how men behave and to just ‘deal’ with it. It took a major movement like this one to even draw attention to sexual harassment in the workplace. Apparently, Harvey Weinstein has been sexually harassing women in Hollywood since the 80s, and it is only now, in 2017, that women have come forward to share their stories.

Does Sexual Harassment really happen that much in our schools?

The conclusion of this study is that although sexual harassment makes many students uncomfortable, it appears to be a normal part of school.

So- how do we change this?

One way to begin the change is to have open discussions with students about what qualifies as sexual harassment. This needs to be made clear to students and even some teachers. The U.S. Department of Education Office for Civil Rights defines sexual harassment as;

It is important for students to know the effects of sexual harassment. Many of the students who admitted to sexually harassing others in the “Crossing the Line” study didn’t think of it as a big deal (44 percent), and many were trying to be funny (39 percent). This ideology needs to changed, as the results were certainly a big deal for those being harassed. Most students who experienced sexual harassment felt that it had a negative effect on them. These effects ranged from feeling sick to their stomach to having trouble sleeping and concentrating. Some students reported more severe effects like it causing them to miss class, quit a school activity, or change schools. Talking openly about the effects of sexual harassment may help to build empathy and result in a harasser being able to better see the harm in his/her actions.

Every public school district is liable for violating Title IX if it fails to take reasonable action against serious, long-term student-to-student sexual harassment that the school employees know about. Teachers need to familiarize themselves with Title IX of the Education Amendments Act of 1972. This is a federal law that states:

"No person in the United States shall, on the basis of sex, be excluded from participation in, be denied the benefits of, or be subjected to discrimination under any education program or activity receiving Federal financial assistance."

Administrators need to ensure that their school enforces Title IX and that students are aware of the protections the law provides. The first step for administrators is to appoint a Title IX coordinator, someone who handles sexual harassment complaints. They should be given appropriate training and resources to help students who have complaints and their name and number should be made available to all students and parents and they should be easily accessible.

Educators must Learn how to Respond

Some teachers may ignore certain behaviors simply because they do not know how to intervene. By doing this, you are sending the message to your students that they are not worth standing up for and that sexual harassment is okay to happen in schools.

If a student confides in you about an instance of sexual harassment, first and foremost, listen to them and acknowledge their feelings. The website, equalrights.org advises having the student write down what happened with as much detail as they can, including where and when it happened, and any potential witnesses. If the student chooses to report the incident to the Title IX coordinator, offer your support as necessary and continue to check in on the student in the coming days and weeks. Reporting an incident is scary and students may need to be reminded that you support them and support their rights to a safe school environment. 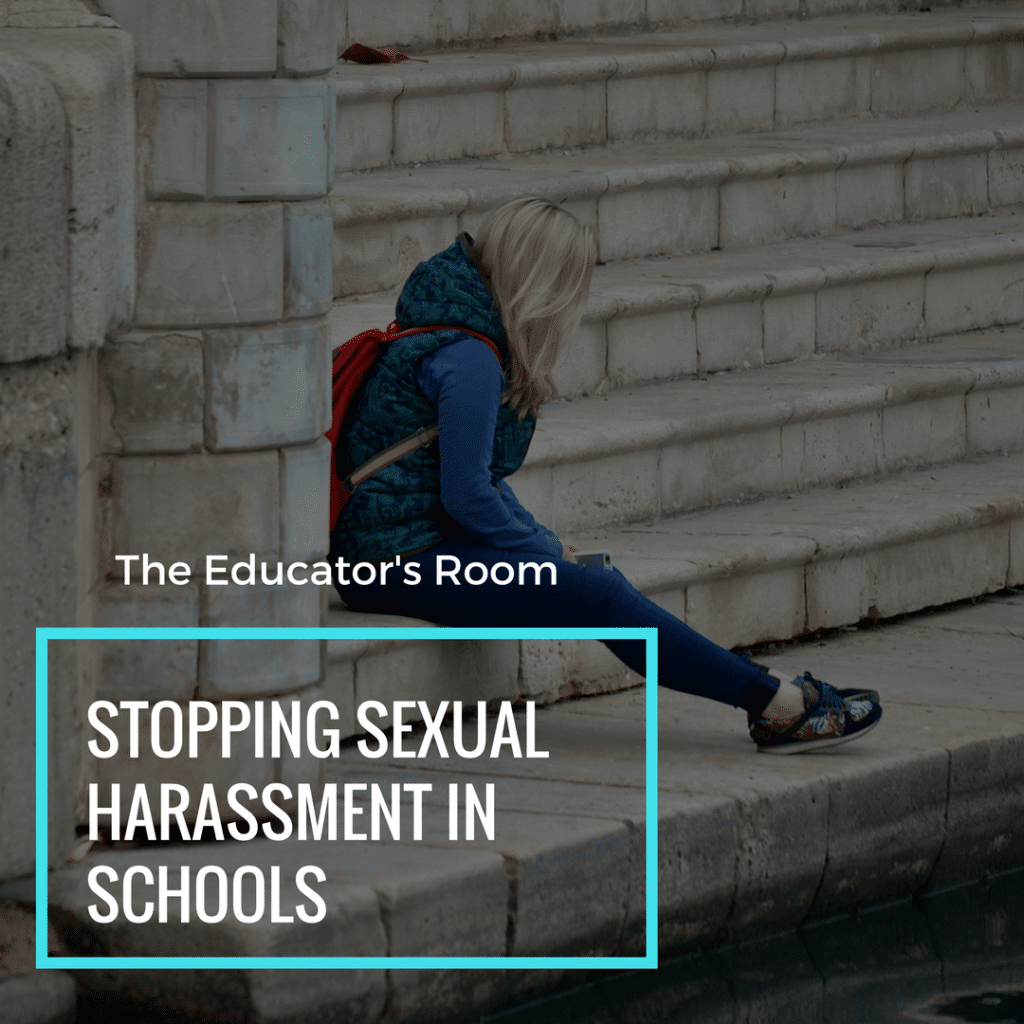 “What Is Sexual Harassment?” Girls for Gender Equity, www.ggenyc.org/programs/education/what-is-sexual-harassment/ 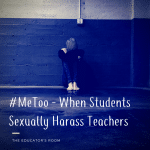 Teaching in a Polarized Society: Reaching Across the Political Divide
« Is Adult Drama the Elephant in the Classroom?
The Challenges of Mental/Emotional Health for Teachers »