Supporting students has always meant letting my students know that I understood how stressful their lives can be. While we can’t control their home lives we can be aware that our schools are not necessarily very student friendly. Between earlier and earlier starting times, dress codes/uniforms, poorly scheduled rosters, and crazy standardized testing, students do have a lot of stress. If we can acknowledge that they are stressed we can find small ways to help them navigate school life more easily.

Often when I could feel the tension in the air at the beginning of a class I would take a few minutes to let them vent or just complain. I found that those few minutes made it easier for them to get to work for the rest of the class.

Supporting students for me has often gone beyond just giving my kids a safety valve. The following are some tactics I’ve used over the years to make the school environment just a little more gentle for the students that I taught.

Ensure Students aren't Hungry.  I worked in a middle school where all students were eligible for free breakfast and lunch. I knew that my eighth graders often had to drop off younger siblings on their way to school and could not get in early enough for breakfast. I also knew that many were of an age where they were embarrassed to be seen eating free breakfast. When we learned that we were going to lose employees from our cafeteria due to so few students eating breakfast, I along with several colleagues proposed a plan to feed the older students breakfast during our twenty-five minute advisory. It worked miracles. We saved cafeteria staff positions and got our students to have breakfast, which made them more attentive in class.

Give Students Brain Breaks. There was the year from hell where administration was having problems with behavior in the halls during change of class. Their solution was to “block” roster (90 to 100 minute classes) so that there would be fewer times each day where students moved in the halls. Considering that we had grades five through eight this presented a real challenge for many teachers. I was fortunate to be using an interesting math program but even that couldn’t stop brain freeze after about 50 minutes. At about the midpoint of the class I would allow a three minute break for students to stretch and rest their brains. This helped avoid restlessness towards the end of class.

Innovate Incentives. Supporting students during standardized testing is a must. This is a very stressful time for everyone. There are class schedule disruptions, long periods of time sitting silently, and the general knowledge that even the adults are worried about the results. My colleagues and I had an additional problem during testing because of administrative decisions. If a student was absent for the entire test, the testing coordinator would test them in the auditorium when they returned. If a student missed only a few sections, it was up to the classroom teacher to make up those parts during regular class time. This meant teaching and testing at the same time in the same classroom. It drove me crazy for years until I resorted to a group reward system. I made the announcement that if everyone showed up every day during testing and I didn’t have to do any make-ups I would pay for a pizza lunch. It was really a win-win because not only did I not go crazy trying to teach and test at one time but the students had something to look forward to when testing was finished.

Think about Sensory Comfort. As a math teacher I often found myself dealing with students who had a math phobia. One year the phobia manifested itself in the form of disruptive movement, talking, and taking forever to start working. When I talked to my team members I discovered that I was the only one with these same problems. I began to look at the situation differently. At the end of the previous year one of my students had given me a teddy bear to remember her by. I kept the bear on my desk (which was off limits to students) but noticed that several students asked if they could hold it. My desk remained off limits but it gave me an idea. I stopped at the dollar store and picked up some stuffed animals and placed them on a bookcase at the entrance to my room. I set up rules for borrowing an animal. They went out on a first come first serve basis and were returned at the end of class. The change was astounding. There were my eighth graders holding their “pets” and working on algebra problems. I even discovered that I had some really fantastic math minds in that class once they had their “pets” to calm them down.

What are some ways you support students beyond academics? 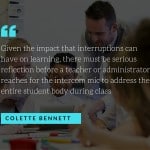 The Trials of Junior Year

The Mental State of Teaching
« First Day Jitters
Are You a "Justa" ? »