"Love words, agonize over sentences. And pay attention to the world." -- SUSAN SONTAG

This will be the shortest column I ever post. But it is important to make the following observation:

When I was a child I used to believe that the people who wrote books were somehow members of an exclusive club, a club that was granted access to the great truths of the human condition, or at least the place from which great utterances, witticisms, or pithy phrases are born. There was something mystical and sublime and almost transcendent in the condition of having one’s words broadcast to the broader world.

Those who could see further and write lucidly about their deepest and most penetrating insights were members of a privileged and sacrosanct coterie of people, a group that seemed to be able to escape the gnawing sensation of hapless futility that defines the bulk of our daily efforts. I hoped that admittance into this club would empower and impassion me to wade into the waters of the learned and the eccentric.

After all, it was Stendahl who, quiet eccentrically, wrote his own epigraph reading: Scrisse, Amo. Visse. “He wrote, he loved, he died.”

And yet, in the wake of my first national book being published last week, what I have come to realize is these dreamy and overly romanticized musings about publication are childish in the extreme. I cannot fathom writing my own gravestone and if I did it would read, “He worried, he worried, he worried, he died.”

I still have to pick up my three children from school and hear them erupt into a chorus of non-stop fighting. I still have to encourage, inspire, and yes, endlessly beg, my senior high school students to do a little studying for their AP exams next week.

I still disappoint my wife when I forget to run an errand (or two or three).

No, there is no club, no highfalutin coterie engaging in supreme one-upmanship over the non-writers of the cosmos, and worst of all, no refuge from the cabal of ordinariness I have spent my entire life trying to escape. I am embarrassed to admit that I sometimes feel twinges of Hector’s hubris in The Iliad, “I myself wish I might be immortal and ageless all my days.”

Instead, the end of the journey of publication actually inspires me to reflect on the journey itself and to consider what I have learned. Looking back on the last three years, there were a great many highs and lows, but what surprised me the most about publishing a book on teaching is how much a writer remains a student, not an expert per se.

Instead of pontifical certainty, I discovered that the proper response to writing a book is not confidence with aplomb, but humility in the extreme. 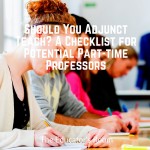 Should You Adjunct Teach? A Checklist for Potential Part-time Professors

Self-Care Is Priority One for This Teacher
« 10 Tips: Running a Political Debate
Google Classroom Series Part 1: Why I Use It »