“Can I take him to the bathroom and wash his ears?”

I turned to stare at the practicum student teacher who had just asked the question. Maybe it was my ears that needed to be washed. “I beg your pardon?”

“His ears are filthy. Just filthy! Actually, he’s filthy in general, but his ears…” She shuddered. She was not an early twenties student teacher but a woman in her forties. She had come to do a short-term teaching practicum in our classroom three weeks before the school year was over.

“No. You may not wash his ears. That would be embarrassing to him. His family is quite poor. I’m not even sure if they have hot water--or water period--in their apartment.”

Her jaw dropped. Honestly, where do these people think they’re teaching? It is a big urban school system not a rich suburb. In fact, while the vast majority of my students were from low income families, they were mostly neat and clean. Only three types or kids were ever dirty: those children who were magnets for dirt, food, and any other spot-making substance; the poorest of poor; or the neglected. Unfortunately, the little seven year old with dirty ears was both poor and a dirt magnet.
“So what about his ears?”

“Okay. After lunch, you can tell him he has food on his face, because he will. You can send him to the bathroom to wash his face. You can even remind him to use soap. Maybe some will splash into his ears. Otherwise, forget them. Don’t look at them.”

This boy was a wonderful spirit. He was always happy and ready to please. The odds of academic success were stacked against him. His mom was at home with a newborn baby. The stepdad had never been very helpful, and he’d left before the baby was born. There were no books at home. I’m not sure what they ate at home. Very little, I guessed. Another teacher told me she had heard there were rats in their apartment. His mom told me she didn’t want to move because our school was so wonderful to her children. She was right. We watched out for them.

There are numerous studies released that discussed the direct correlation between poverty and lack of academic success. It seems so “Well, duh?” to me. I read articles after article about it with interest. One study that really caught my eye was a study done in 1966, The Coleman Report. It says one third of academic success were in-school factors. The remaining influences were family characteristics. There have been several studies since then, most recently Class and Schools, 2004 which reaffirm the Coleman Report. In my grandiosity, I'd like to think I had more than a 33% impact on a child's academic success. Regardless, it is apparent what happens at home is very important to a child's learning.

So much rhetoric over the last few years has been about teacher performance. It made me feel like Superman with a bunch of kryptonite scattered around the classroom. I was supposed to be able to do wonderful things and did do many. Somehow, the superhuman part of me just never could override a child’s home life. My experience was that kids who had educated and/or involved parents were always among my top students. There were, of course, exceptions but those were the exception not the rule.

I think of a beautiful Latina who came to the US during first grade. She had never been to school before her arrival. After a few weeks of school, I met with her mother. I explained my concern about how far behind she was in reading. Her mother told me, with a very determined look, that she would fix it. After the meeting, the little girl and her mom walked to the library, got a library card, and checked out a stack of books. That night they read them all. Each day, after school, they’d drag their huge bag of books back to the library and check out new ones. Her reading took off and there was no looking back. Her mom had added hours of reading instruction to the few hours she got in the classroom.

I also remember another mother, who got the same concerns from me about her daughter. She just shrugged her shoulders and said with finality, “We don’t read much at home.” You can guess the outcome. She made gains but not what I would have liked.

The kids who do better often have more life experience. They were often raised in homes where they were read aloud to. They traveled places. They had family meals where they discussed life. All these factors contribute to larger vocabularies. Vocabulary is a key component to academic success.

I’m not judging parents. I’ve had bad parenting moments myself. I don’t even want to discuss my parenting after my husband died. Life is not always easy. Teachers don’t have magic wands to make up for fights at home, loud partying, the death of a loved one, or financial instability. All these stressors affect children. Poor diet, anxiety, and lack of sleep affect all of us. If a child fell asleep at his desk, I let him sleep. Did he learn much? Hardly, but if he was that tired then he wasn’t going to learn anything anyway. You just had to be ready with a tissue to quickly hand him when he woke. He would need it to wipe away the drool.

Family dynamics and socio-economic factors strongly impact learning. It is not an excuse for poor teaching. It is not a whine. It is life. A teacher can build buffers, provide a safe haven, and find ways to make a child learn. It is the kryptonite of the classroom. 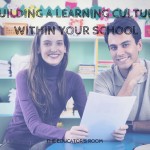 Building A Learning Culture Within Your School

Taking the Anxiety Out of Student Placement in Special Education
« September Madness: 5 Thoughts For Young Teachers
Have you Read a Banned Book Yet This Week? »