RTI - Response to Intervention - has made its way to the top of the list of most commonly used education acronyms.  Since changes to policy language in the 2004 Individuals with Disabilities Act (IDEA), the Response to Intervention framework has emerged as the favored way to identify students with learning disabilities.  After a decade in our schools, it’s time to ask: how is it working?  What does it look like in implementation?  And how can we best serve our students through the process?  The Educators Room went to the source—the educators implementing RTI--- for an honest look at where theory meets practice.

This is what you had to say.

Ninety-eight educators responded to The Educators Room RTI Survey between October 15-19, 2017.  Sixty-three percent of the respondents were general educators, 11% were special education teachers and the remaining 26% were a variety of professionals, including: special area instructors, administrators, academic coaches and school psychologists.  Over half (51%) of the respondents serve elementary students.  Thirty-two percent serve middle grades, while 15% serve high school.  Four percent serve all ages.  Ninety-three percent of the responses come from those who have provided RTI services.

Assessment Of and For Instruction

When asked how success in Tier III is evaluated in an open-ended format, responses showed wide variation.  Forty-nine of the responses were specific and codeable.  Of the specific responses, 35% use weekly progress monitoring scores to evaluate Tier III progress.  Sixteen percent use benchmark scores and 16% use progress toward a goal.  Ten percent report using grades to evaluate progress.  Twelve percent of respondents report that Tier III success is not evaluated and another 12% are not sure if it is evaluated. 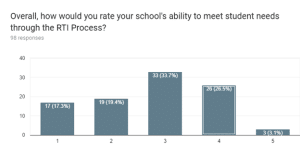 Where do we go from here?

The survey responses raised many questions about how middle and high school fit into the RTI puzzle.  Responses also demonstrated a need for more teacher support.  With such a wide variety of experiences and opinions, it is clear that the RTI conversation is just beginning.  Because over half of the survey responses expressed frustration with the system, it is also clear that the conversation must continue.  As one response stated, “I literally hate my job, but love my students.”  It’s clearly time for the teachers to talk and policymakers to listen. 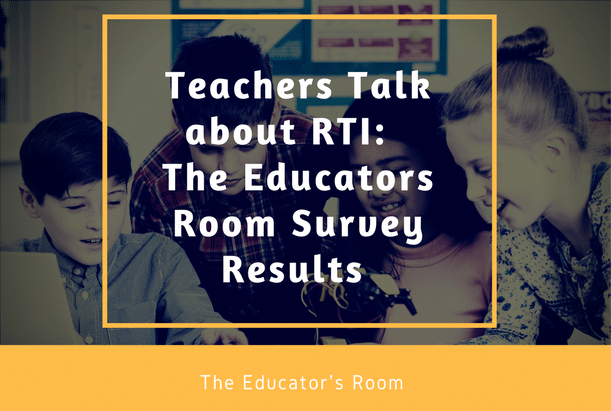