A couple of mornings ago, I happened to be listening to the radio while a popular education pundit was being interviewed. After  listening to him tout his own personal accolades and his ideas for educational reform, he said something that struck me. He claimed that at his school, he did things that were beneficial for the students, instead of the teachers in the building.  He continued to brag that  at his school, students attend during the summer  and during the year they not only have extended day (every day of the week), but students come to school almost every Saturday for  more content enrichment.

As I listened I thought, "How can a principal  claim to care about educating children, but have such a blatant disregard for the happiness of their teachers?" As the interview ended, I knew that if teachers at his school actually had a chance to voice their concerns there may be a different story. All teachers understand that the breaks that are given during the year and summer are not only appreciated, but they are greatly needed.  The days are gone when students were given summer breaks to work on the family farm, but now summer breaks are given to give teachers a mental break and for schools to figure out their "game plans" for the following year.

So for those who still  dare ask the loaded question, "Why do teachers need a summer break?" I'm going tell you (no holds barred) about why summer vacation is  a necessity, not a want for teachers.

1.  We work with children whether they are obedient, well behaved or unmotivated. The public has a view of public education from fifty years ago when most students listened to their teachers and did their work without question. In 2013, in any given classroom in the United States, the landscape of students has changed. There are students who feel entitled to education and therefore don't feel the need to do actual work  in order to earn a grade.  In addition to the sense of entitlement that most students display, we have anywhere from 30-35 students in a classroom who suffer from multiple emotionally, behavior and environmental issues that may impede their instruction. Yearly, our paperwork seems to increase while our resources seem to decrease.  In reality, teachers spend a lot of their time disciplining and supporting students- instead of engaging in instruction.

This past year in one of my classes nearly HALF of my class suffered from documented issues that kept them from being "model" students. Several suffered from various emotional disturbances and were being serviced through the special education department. Mid-year I received two young men who were new to the country and had never been in a formal school before despite them being fifteen years old! In addition, I had a handful of students who were not only repeating the class but read several grade level below their grade. Every day in the class I had to multitask to keep children engaged and on task- not an easy task for even the most veteran of teachers.

2. We (teachers) are ultimately judged by how well a parent parents their child. Many times we work with wonderful parents  who make sure their children  are taking advantage of their education. Parents like this are a proverbial breath of fresh air and help us tremendously in the classroom. However, on the other side many times teachers have to deal with the consequences of neglectful/abusive/bad parenting. Students come to school without being properly parented; therefore, making a teacher's job even harder.

I have had students come to school hungry, tired and emotionally upset because of events that had happened the previous night at home. A year does not go by where I don't have to write a referral to the social worker about suspected abuse and I can't tell you how many times I've witnessed parents give up on their children. So, despite me having to get through the curriculum with all of my students I still have to attempt to "fix" my students emotionally.

3.We (teachers) work (on average) about 50 -60 hours a week but are only paid for 40 hours. An average teacher starts work by 8am and works well into the evening, grading papers, calling parents or preparing for our lessons for the next day. Yes, we get a planning period (usually only 45-60 minutes a couple of times a week) but during that time we are either called into meetings and/or are trying to catch up on work. Think about working 50-60 hours a week WHILE maintaining a family and "regular" life. It's no wonder teachers are burned out by the end of the school year.

To add insult to injury, there are numerous districts across the country where teachers barely make enough to take care of themselves. Could you imagine working those hours only to make $35,000 per year while you have a Master's Degree? This is why (according to a Washington Post article ) half of new teachers leave the profession.

4. We (teachers)  have to deal with the general public labeling us as lazy due to many conditions out of our control.  Since the inception of No Child Left Behind with its scare tactics of  not only pushing standardized testing to children, but the labeling of schools as good/bad based on them has created a culture where teachers are blamed for everything. If a student fails a standardized test, the teacher is questioned and then blamed. If teachers demand better work conditions, then we're lazy and selfish. If we protest the closing of 70 public schools in inner city Chicago and go on strike, we're told to just "suck" it up.

My entire time in education, I've worked in communities that were filled with drugs, violence and poverty. We saw students who by the time they were in 3rd grade were so traumatized by things they'd witnessed at home they had ultimately given up on school. Our job as educators, has always been to  pull those students "back in" and make them feel  safe  for those seven hours in our walls.

Ultimately, summer vacation allows teachers to reflect on the previous year and rejuvenate so that they can start the new year fresh and ready for new students. Our plight as educators is unique- we love our students and we love our time off in the summer.  So the next time you hear someone say that teachers have it "easy" because we're "off" for the summer, please remind them that we do some of the hardest work in the world,  we educate children. 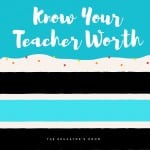 Know Your Teacher Worth

Self-Care Is Priority One for This Teacher
« Education Reformers Without Classroom Experience Lack Credibility
Cyber School Chronicles: Why I Chose a Cyber Charter School to Educate My Children At Home »