All across the United States, there is an unprecedented attack on public employees’ rights and benefits, especially teachers’ pensions. Those of us in Illinois have felt, as has the nation, the impact of the 2008-09 financial crises. State policymakers have responded to this catastrophe, not by addressing the structural deficits that are a result of the lack of revenue growth needed to meet the increased cost of services, but by irrational public pension “reform.” In one particular state, however, its economic austerities have also been intensified by decades of legislative irresponsibility and deceptiveness. The results are the unconscionable, unfunded liabilities of the Illinois public pension systems.

Since 1953, Illinois policymakers have consistently failed to make the annual required contributions to the state’s pension systems, primarily because they could then pay for services and their “pet projects” without raising taxes.  They had bargained with previous union leaders and allowed for enhancements of pension benefits without fully funding the public pension systems.  They also created a flawed re-funding schedule, and they have refused to correctly amortize the pension systems’ unfunded liabilities. In short, they have favored corporate interests rather than the interests of their citizenry and; thus, they have seriously sabotaged the public employees’ retirement plans and the State of Illinois’ future economic solvency through calculated mismanagement and fiscal irresponsibility. Past state policymakers left us with this fiscal debacle.

Current Illinois policymakers are not more trustworthy or competent either. They are equally as reckless in employing the old cost-avoiding tactics as their predecessors. They continue to use an ineffective and “cheaper” actuarial cost method (a projected-unit credit which back loads required contributions) instead of an entry-age normal cost method for determining pension funding and benefits earned.  They continue to issue obligation bonds with the assumption that they will reap high investment returns, and they continue to be concerned more about Bond-Rating organizations than the protections of their public employees’ guarantees and security. They prefer to jeopardize the public employees’ retirement plans through pension “reform” by contesting teachers’ constitutional rights and cutting their benefits, even though revenue and pension debt reform is the legal and moral solution.

Instead of protecting public pension rights and benefits, which have a legal basis under Illinois State Law; instead of restructuring the state’s revenue base to pay for the state’s growth in expenditures and its injudiciously-accumulated debts and obligations, current policymakers have chosen to challenge the Illinois constitutional provision (Article XIII, Section 5) and diminish (and predictably destroy) the public employees’ defined-benefit pension plan, their health care benefits, and their cost-of-living adjustments. Their masquerades of proposed pension “reform” bills to be considered conveniently after the November elections include increasing public employees’ contribution rates (which are already one of the highest rates in the country), raising public employees’ retirement ages, capping earnings for final pension calculations, eliminating or reducing cost-of-living adjustments by forcing public employees (and retirees) to choose between a COLA or their health care benefits with duress, and inducing public employees to select an unreliable and inadequate self-managed retirement plan (none of the above-mentioned address the pension debt created by policymakers).

For most teachers, their pension plan is their only retirement subsidy, since nearly all of them cannot receive Social Security benefits. Furthermore, instead of funding crucial services and benefits in a time when they are most needed, many ill-informed policymakers want to shift the state’s normal costs for the Teachers’ Retirement System to public employees and school districts and further slash public services and health care benefits. For most school districts, the effects of the policymakers’ proposal to shift the normal costs of the pension systems to school districts will raise property taxes and devastate public schools’ resources and programs, increase class sizes, purge teachers’ jobs, and freeze contractual salary enhancements for those who remain employed (on average, wages for teachers and other public employees are lower than employees in the private sector with comparable education). Because the best possible teaching candidates will most likely forego working in Illinois, as a result, students will become victims.

The irony, of course, is that poverty, inequality and violence are not issues to be “reformed” in Illinois or anywhere else in this country. Citizens United, Super Political Action Committees, and the Civic Committee of the Commercial Club of Chicago’s “We Mean Business” will perpetuate that incongruity. In Illinois, policymakers are sanctimonious about their recent lacerations of Medicare, and they are foolhardy about granting excessive tax breaks for wealthy corporations that have extorted the Illinois General Assembly and the citizens of the state. In Illinois, and in other states, political policies are created for the corporate elite, all in the name of “Free Market” principles and anti-unionism. In Illinois, they are espoused by Illinois Is Broke (the Civic Committee’s obverse group), the Civic Federation, Illinois Policy Institute, Pension Fairness for Illinois Communities, Taxpayers United of Illinois, and the Chicago Tribune, and their ilk.

We are not alone fighting this assault in Illinois. In New Jersey, Pennsylvania, Kentucky, and Louisiana, policymakers have not been held accountable for their incompetence and betrayal as well. They are not held responsible even though their state’s current and retired public employees’ will suffer disastrous consequences as a result of their policymakers’ negligence to fully fund their pension systems. Furthermore, in Maine, Oklahoma, Washington, Wyoming, Rhode Island, Minnesota, South Dakota, New Jersey and Colorado, the public employees’ COLA has been either reduced or suspended. These states do not have a constitutional provision to protect this benefit (Alicia H. Munnell, Director of the Center for Retirement Research at Boston College).

“[fusion_builder_container hundred_percent="yes" overflow="visible"][fusion_builder_row][fusion_builder_column type="1_1" background_position="left top" background_color="" border_size="" border_color="" border_style="solid" spacing="yes" background_image="" background_repeat="no-repeat" padding="" margin_top="0px" margin_bottom="0px" class="" id="" animation_type="" animation_speed="0.3" animation_direction="left" hide_on_mobile="no" center_content="no" min_height="none"][Moreover,] twenty-one states [have] raised employee contributions for current and future [public] employees only, which diminishes the net compensation received in the form of pensions for these workers. Thirty-one states [have] reduced benefits for new employees, primarily by increasing the age when full benefits will be paid, and five states [have] introduced a less expensive hybrid defined benefit/defined contribution system for new employees. In all cases, new employees will receive diminished pension compensation… [It is important to reiterate that] current actions, without any compensating changes in wages, have the potential to adversely affect the quality of people willing to teach in public schools” (Munnell, State and Local Pensions: What Now?).

These pervasive attacks on public employees’ pensions are aligned with the undemocratic, corporate dismantling of public schools for privatization or profiteering from unaccountable, biased charter and simulated schools; dictatorial Race to the Top and unreliable value-added modeling for rating schools and teachers’ effectiveness and students’ learning; counter-productive merit-based pay knotted to standardized test scores; the irresponsible failure to renovate dilapidated public school buildings and rectify the depletion of public schools’ resources and personnel, such as school psychologists, social workers and nurses; the oppressive stripping of collective bargaining and due process rights; the despotic destruction of public employees’ unions; the propagandized demonization of teachers; and the disparate distribution of wealth and “shared sacrifice.”

I am asking for all of us to fight this assault on teachers’ pensions with other stalwart teachers, so all teachers and other public employees, their family and their friends across the nation can have an opportunity for unification and purposeful action. 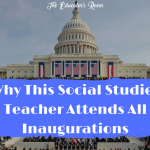 Why This Social Studies Teacher Attends All Inaugurations
« {Watch Live} The Educator's Room Lunchtime Google Hangout Dealing With Teacher Unemployment
School is Out for the Summer - What is Next? »