Okay, let’s get the boring, background stuff out of the way first, and fast. It’s painful but necessary. The federal government passed No Child Left Behind, commonly called NCLB, in 2002 under President Bush. The Department of Education says it passed with partisan support. The purpose of the legislation was to increase accountability for public schools in the United States. Why did we need an increased accountability? Due to the fact that in 1965, when President Johnson passed the Elementary and Secondary Education Act (ESEA), we were in serious competition with Russia to send a man to space. When Russia beat us to it, our government wanted a strong focus on math and science in our schools. But in order to assess that “strong focus,” they needed legislation mandating accountability. ESEA required schools to stayed around until it was eventually

In 1965 when President Johnson passed the Elementary and Secondary Education Act (ESEA), we were in serious competition with Russia to send a man to space. When Russia beat us to it, our government wanted a strong focus on math and science in our schools. But in order to assess that “strong focus,” they needed legislation mandating accountability. ESEA required schools to stayed around until it was eventually reauthorized and called NCLB. Why was it reauthorized? Because in 1983, a government commission released a study called “A Nation at Risk,” outlining the dire educational conditions of our schools. While there is debate as to the efficacy of the report, it was, and still is, touted as a very strong testament to why we need accountability.

In 2009, President Obama offered over $4 billion to public schools through a program called Race to the Top (RTTT). The program had four focuses:
• To adopt standards to help students be prepared for work and college in a global setting
• Build data systems which inform students, parents, teachers, and schools on student growth and learning; and drive instruction
• Recruit, develop, reward, and retain top quality teachers
• Focus on low-achieving schools and garner success
For schools to be eligible, they had to agree to use the Common Core State Standards (CCSS). These are the standards are a result of RTTT.

That’s a lot of government interference for what is constitutionally wrong. The 10th Amendment leaves education up to the states. Supporters of the Common Core Standards will say the states are in control of their own education and RTTT was completely voluntarily. Reformers will say the offer was more coercion than partnership. Schools have been notoriously underfunded throughout the years, and taxes in many states are being cut so schools might tell you they didn’t have a choice when this money was offered.

That is the background of our current state of testing. ESEA turned into NCLB. NCLB turned into RTTT. RTTT turned into CCSS. To comply with federal requirements, schools are now required to test every student, regardless of ability. To the student who is physically disabled, and completely unable to even write their own name; to the student who has a learning disability and takes special education classes in math, and reading; to the student who cannot sit in a 45 minute class without having an emotional outburst because their pencil broke or it is too hot or too quiet or too loud or their jeans itch their thighs; the average student who goes to school and earns their grades with a bit of study; to the student doesn’t ever have to open a book or pay much attention in class…they all take the same test at the same time with the same expectations. This type of testing is meant to show the government the level of competency of teachers in public schools. If schools are recruiting, developing, rewarding, and retaining effective teachers, the students will meet “adequate yearly progress” (AYP) and the school is safe from government intervention. AYP changes each year, and the stakes get higher. With more effective teachers, more effective strategies, each year the expectations respectively increase. When schools do not meet AYP, there are specific interventions designed for that school; which eventually could lead to that school being closed.

Let me describe a testing situation for you. Picture a child who is 14 years old. A student who is in 8th grade. This child comes from a home where the parents are split, and angry at each other. There is little food, little comfort, and little support from a loving parent. They are, unfortunately, too wrapped up in their problems to fully focus on their child’s problems. This child comes to school sad, angry, and hungry most days. This child has lived like this for most of their life, which has affected their academics. Their constant worry for mom, dad, siblings, food, and/or home, keeps their brains occupied during reading class, or math class. This constant worry and distraction through the years have led to a current reading level of 2.3. That means the third month of second grade. An 8th grader reading at a early 2nd grade level. The following link brings you to some sample questions a typical 8th grader would see on their state test

This passage discusses the professional success of Ansel Adams, a famous photographer. A sample sentence: “"When I first made snapshots in and around Yosemite," he said, "I was casually making a visual diary—recording where I had been and what I had seen—and becoming intimate with the spirit of wild places. Gradually my photographs began to mean something in themselves; they became records of experiences as well as of places. People responded to them and my interest in the creative potential of photography grew." (Smarter Balanced Practice Assessment, pg. 3).
Again, imagine reading at a 2nd grade level, reading like an 8-year-old, and having to answer this question. Not to mention the fact that you were up late last night because mom was crying all night, dad was out at the bar and came home drunk and loud, and you were responsible for getting your siblings up and to school this morning. Do you really care about Ansel Adams? Do you really care about what accountability your school has to the federal government? According to the National Center for Educational Statistics, about 10.9 million children in grades K-12 were living at, or below, the national poverty line (2013). That’s a lot of children having to worry about taking a test that the federal government is making them take.

So what are teachers to do? Teachers know these tests are not good for the kids; whether it's kids affected by poverty, or not. A quick Google search for “teachers who refuse state testing for students” reveals over 79 million hits on teachers, and parents, who are choosing the “opt out” side for students and children. Teachers and parents are learning that there might be a better option for accountability, teacher recruitment, and retention, instruction, and offering everyone the same opportunities in education. It’s an important time in education. It’s something to think about and explore. 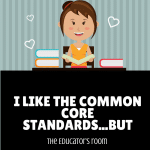 I Like the Idea of the Common Core Standards, But... 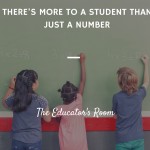 There's More To a Student than Just A Number
« Making it Interesting: 5 Easy Ways to Differentiate Processes
The Final Days of School »