In Mitchell County, NC, there was recently an uproar regarding students attending a production of The Complete Works of Shakespeare: Abridged by the Reduced Shakespeare Company. Based on the article (which you can read here), it sounds as though the Parkway Playhouse, the theatre company that performed the play, went above and beyond to tone down the content to please the school; in response, the students and teachers actively texted during the show (teachers, you are modeling behaviors here!) and got the show shut down due to its content, partway through the performance.

The complaints from the high school included:

I have worked on this show. This show does have all of these things...because they are literally performing moments from every single Shakespeare show.

You know what the real problem was?

“But wait!” you may cry. “We teach his works because they are classics! We do understand the content and hope the students do, too.”

The other reason frequently given for these is “unsuitable to age group,” but really, how do we quantify that?

Zero of Shakespeare’s works appear on this list. Has he been banned/challenged? Sure, mostly in the 1800’s.  He was horribly edited by a man named Thomas Bowlder in 1807, and this is the reason we now have the word “bowlderize” in our vocabulary, which refers to prudish censorship. In modern times, though, the only reference I could find to a recent Shakespearean ban was of Romeo and Juliet, specifically the No-Fear Shakespeare edition, which translates it into modern English--meaning the understandable nature of it was the true problem.

Frankly, the argument of classic vs. not classic is completely invalid.

The difference between Shakespeare and these other banned/challenged works is simple: Shakespeare’s works are not written in our current vernacular, while the others are written almost exclusively in a fashion still spoken today. You can pick up those books and immediately understand that characters are drinking, having sex, doing drugs, killing people, using foul language, and so forth. Shakespeare’s characters are also doing all of these things, often repeatedly and in short order, but unless you are well-versed in Elizabethan English, you can’t immediately pick all of it up. Heck, even if you are pretty good at it, you don’t always get it on the first read.

Clearly, that is what we are relying on. We need the reader to not understand in order to get away with schools reading this or high school students performing Shakespearean works.

It’s time to make a choice. Are we going to give in to bans based on “objectionable content” in an honest way, by proactively banning the works that (arguably) started it all? Or are we going to stand up against censorship, stop banning works, and actually make sure kids and their parents understand that Romeo is a 20 year old macking on a 13-year-old*, Titania is having sex with a donkey, and Hamlet is contemplating suicide (or the idea of suicide, depending on interpretation), not giving a pretty speech?

We can’t do both anymore.

*Ages are not explicitly stated, but Romeo is generally believed to be 18-23 while Juliet is just under 14. 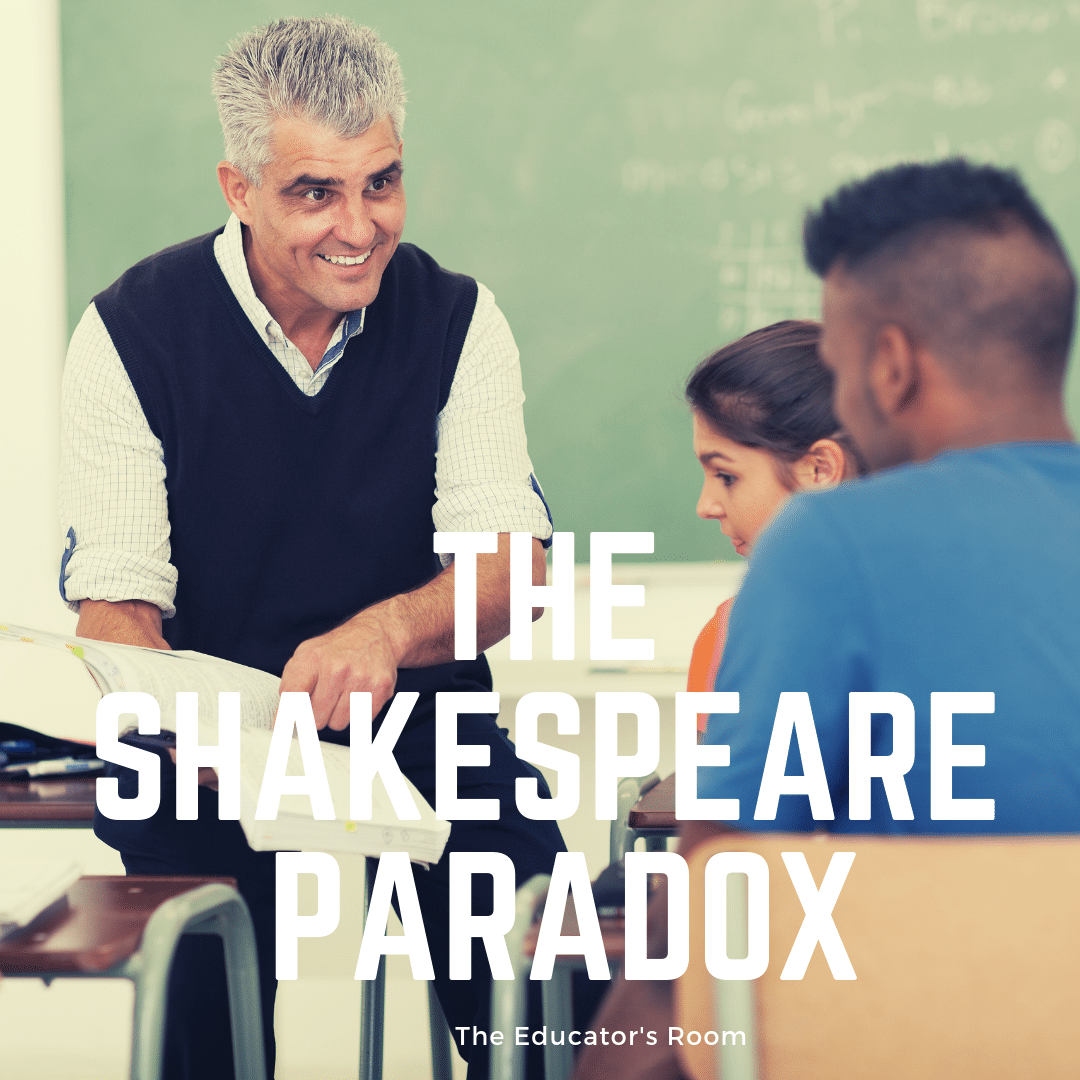 Beyond a Venn Diagram: Making Movies Work in the ELA Classroom
« Are You A Ticking Time Bomb in the Classroom?
15 Things My 3-Year-Old Taught Me This Year »