Theatre Education: What TV Gets Right...and What it Gets Wrong - The Educators Room
×

I am writing this immediately following watching the first episode of Rise, a new series about a high school English teacher, Lou Mazzuchelli (played by Josh Radnor), who is achieving his dream of directing the school musical. It opens with him convincing his wife he needed to do this (just like in Glee) and then was followed by a montage of good singers, bad singers, and even an interpretive song and dancer (just like in High School Musical). He then discovers that not enough boys auditioned and pulls a guy who has no interest in this from the football team (Glee, again, and some High School Musical except it’s basketball there). And now the real work can begin!

I know this sounds like a TV review, but really, it’s a review of how my  job is looked at in the media.

I am a theatre teacher. I have a bachelor’s degree in Theatre and a Master’s Degree in Theatre Education. I mention this because I don’t think these shows ever have a real Theatre teacher involved, like medical shows do with doctors and nurses. They need one; we are highly trained and highly knowledgeable! While their stories may make for compelling film and television without our input, they are quite the departures from reality.

So, here are some common storylines that these shows and films tend to include...and the real deal.

Trope: Auditions are mostly awful with just a couple of good ones. If teachers posted them on YouTube, they would go viral thanks to being so hilariously bad!

Reality: I wish! I just cast a show, 20 roles, 34 auditioners. 34 good auditions. Casting a show is one of the most emotionally exhausting parts of my job because they are SO good, and I have to break some hearts.

Trope: Administration is not involved until it’s time to be the bad guy, if ever.

Reality: I have never not run a show past my administration, even my really supportive ones. Running the shows past them covers my behind if a community member gets mad about the content. For new teachers with a passion for risk join a community, they need to keep the community in mind. When you are a school that is used to Rodgers and Hammerstein, you simply cannot jump straight into the sexual awakening of teens and expect everyone to be okay with it.

Trope: “If you build it, they will come.” In Rise, only one boy auditioned, with a handful of girls. In Glee, they had limited boys and a handful of girls. In High School Musical, they had Lucas Grabeel and...I guess there were other boys? But not enough for a show. In all three, they decided to take the leap and assumed kids would just join in. And the kids did!

Reality: We stress about who we KNOW we have and find a show that fits them. We cannot guarantee kids will magically show up to fill in the roles we can’t fill, especially if (like me) we refuse to snake/guilt kids from other activities they are more interested in. Some years we have a wealth of talented boys and few girls, some years it is the opposite. It’s not an exact science and sometimes we guess wrong, but it is easier to fudge a few roles (within the legal limits of the rights!) than it is to find a new show or hope kids will appear.

A frequent question I get is: why don’t you see who auditions and then choose the show? Or change a show if you don’t get the auditioners you expected? We have to pay for royalties. Which brings me to…

Trope: Rights? We don’t need no stinkin’ rights! At the beginning of Rise, the kids are clearly at the end of rehearsals for Grease (costumes, completed choreography, etc.), but who cares! Scrap it! When the administrator in Rise says they have to do Pirates of Penzance instead of Spring Awakening, they immediately start rehearsals for the former and seem to forget the latter, without worry.

Reality: We have to pay for all shows up front. And they aren’t cheap! If I am doing a name brand musical like Into the Woods, I am looking at a minimum of $750 up front. If I am looking at a play, I am looking at at least $150 up front. In the reality version of Rise, they have to notify the Spring Awakening company that the show is no longer happening and will probably lose the money. They also need to get the rights for Pirates. They aren't supposed to even start rehearsals until that’s done.

Trope: There is always a rivalry between the big sport at the school and the play, particularly between the coach and the director.

Reality: I’m sure this happens, probably more at the high school level than at my middle school one. I am not trying to deny anyone’s experience. But, it hasn’t been my experience. While sports tend to get more money for both supplies and for staff, my schools’ coaches have largely been very supportive of the arts. There have been times where we couldn’t make it work for the kids to do both a sport and the play, but we usually do find a compromise; and, when we can’t, we are careful to not blame the other activity.

Showing such a rivalry consistently, even if it is only fictional, is dangerous because it makes the public think it exists. The kids are forced to choose before even trying to see if doing both is possible.

Trope: Crew? What is crew?

Reality: We have at least as many kids working backstage as we do onstage, and we are responsible for their safety and education as well. They are just as important as the actors and deserve their due! Rise does have one crew member so far; Glee and HSM really didn’t. I am excited about the Rise character’s story, to begin with, but I really hope it turns into a subplot about crew altogether.

Trope: That teacher is WEIRD AS HECK!

Enjoy the shows and movies. High School Musical (and its sequels) are guilty pleasures of mine, I had fun with Glee, and I do plan to be back for Rise next week. There are these beautiful moments in all three of them that remind me of being a kid who ONLY had her tribe of theatre kids as a safety net, and Glee and Rise even have the occasional moments of teacher clarity. Just remember they are fiction and when in doubt, ask a theatre teacher! 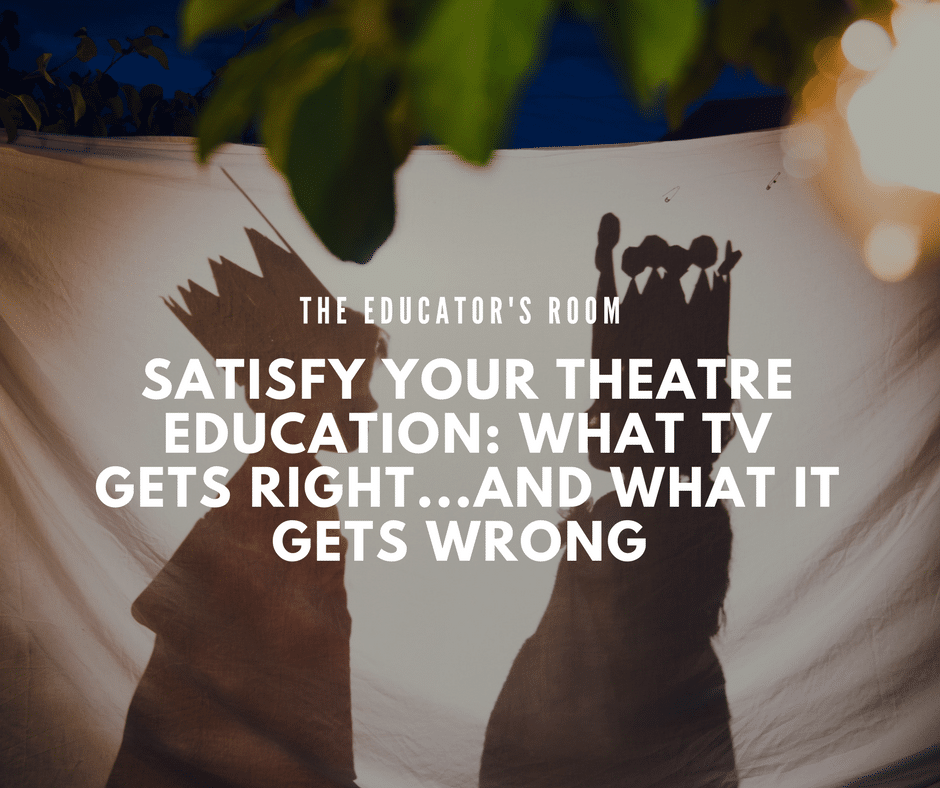 Shakespeare and Americans: The Relationship Starts in the Classroom

Educators React to the March for Our Lives
« It's Our Fault: A Teacher's Confession
Project-Based Learning: A User's Guide »