On March 24, 2018, in the wake of the February 14, 2018, school shooting in Parkland, Florida, anti-gun violence marches were held in the nation’s capital and around the globe. A record 800,000 attended the DC march, coordinated and led in large part by the students who survived the Parkland shooting.  Their passion and their activism are now well known due to their appearance on broadcast and social media. The names Emma Gonzalez and David Hogg are now well known in activist circles as these two have been among the most outspoken of the Parkland survivors.

In the short time since the shooting, the Parkland activists have not only become the conscience of the nation regarding anti-gun violence legislation, but they have had some impact on legislation in Florida regarding accessibility to firearms, and their March 24 global effort seems to be shaping the consciousness of the American electorate, acting as the necessary counterweight in creating a tipping point in national public opinion. Due to their efforts, average Americans are educating themselves about the causes of and potential controls over gun violence. One population that has a direct impact on the social and political trends regarding our national dialogue about gun violence is the teachers who must work in schools, every day becoming potential targets along with their students.

Teachers made up a vocal component of the March for Our Lives, and they are letting their views be known on social media, within their own educational community, and to their legislators on both state and federal levels.

On the whole, teachers appear to be supportive of the efforts of the students who have taken to the screens and to the streets to express their grief and their frustration with their elected officials, the latter of whom they frequently refer to as “politicians.” It is evident that the Parkland activists paid attention in their middle school civics classes, and that they learned how to affect the levers of power from the AP Government teacher, who inspired outspoken voices such as Gonzales to take their case against the NRA to the voting public. The voices of teachers could clearly be heard in the many signs that were visible at the DC March For Our Lives on March 24. Among them included these messages:

“Give teachers a pay hike, not guns.”

“The miseducation of Betsy DeVos”

The March for Our Lives was a public expression of frustration with the lawmakers in Congress and with state legislators across the nation. The level of education in the crowd was high – 87% of a sample of the crowd held bachelor’s degrees or higher. The crowd was predominantly an adult crowd, though the speakers at the podium were strictly young people who had become the victims of gun violence. The Parkland activists have taken on a broader view of the effects of gun violence, confessing that their school is predominantly white and upper class, they are aware of their own “white privilege.”

They invited young speakers from Chicago, Baltimore, and Washington, DC to share their stories of how they lost loved ones not necessarily to mass shootings, but also to the gang violence that has taken young lives in our nation’s inner cities. The Parkland activists have also pointed to inequities in how the educational and juvenile justice systems have led to gun violence among communities of color. In so doing, they have given stronger credence to their call for comprehensive legislation that would reduce the death toll due to a rampant gun culture in America.

The March for Our Lives activists has recently issued a statement containing a five-point platform for gun-violence prevention. These include:

As a means to these ends, the Parkland activists, among other gun control groups such as the Brady Campaign and Mom’s Demand Action for Gun Sense in America, have targeted the National Rifle Association as the greatest obstacle to gun violence reform legislation. The pro-gun control groups know that the NRA funnels large amounts of campaign contributions to legislators that they rate as friendly to their cause, and the NRA is excellent at mobilizing its membership to vote against lawmakers determined to restrict what they see as their Second Amendment rights under the US Constitution.

What the NRA does not make public is that a majority of their own membership supports many of the goals of the anti-gun violence movement. In fact, the Parkland students have explicitly stated that they are not calling for a repeal of the Second Amendment (though former Supreme Court Justice John Paul Stevens has publically stated that a Second Amendment repeal is what the young activists should be calling for). The gun control movement now gaining momentum seeks to end gun violence through common sense legislation, not through gun confiscation. It is through their message that they hope to bring an end to the gun culture in America, putting pressure on lawmakers to accede to their demands. The youthful activists see themselves as the next generation of voters, and they intend to use the ballot box as the means to their political and legislative ends.

Some teachers are concerned about how the young Parkland activists and others are presenting their views. Parkland survivor David Hogg has used profanity in online video interviews to get his frustration across. Many young people express their frustration with adults in power in Washington and with the NRA, and they openly opposed these adults in their rhetoric. Overall, many teachers expressed hope and solidarity with the young activists, giving them understanding and empathy when using harsh language against the traumatic violence that they have endured. As adults, it appears that many teachers don’t want the anger of the Parkland victims to alienate potential allies that they will need to bring about meaningful legislative change on this front. The Parkland kids and their fellow gun violence survivors need to stay respectful and appropriate when communicating their message, according to some educators, even if it means whitewashing or repressing the anger that stems from their own experiences.

We Are Witnesses to Cultural Change

It seems undeniable that a cultural and political shift is underway. Americans witnessed 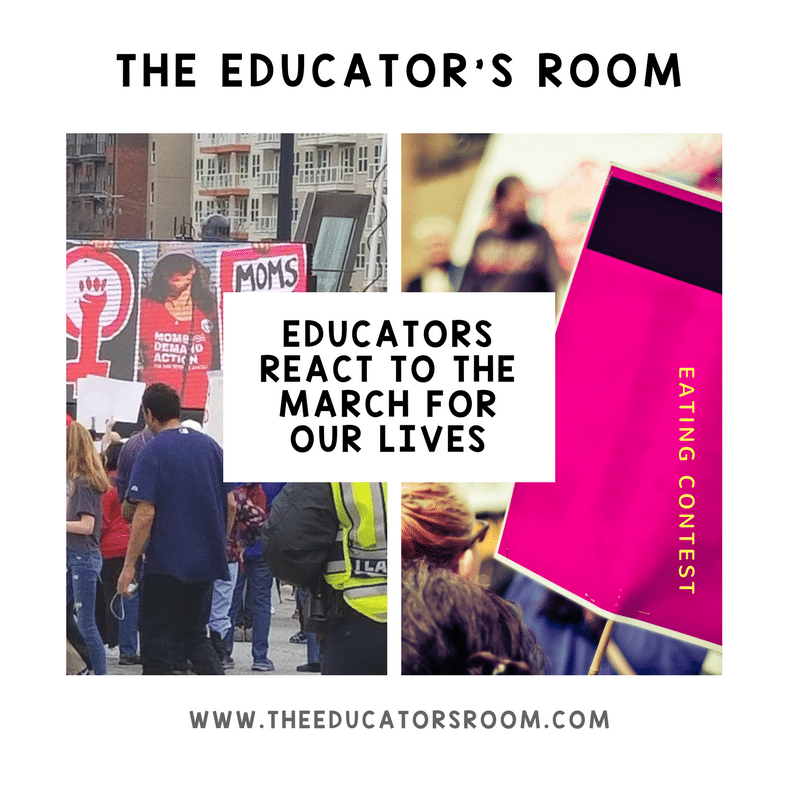 a rapid shift in public opinion regarding marriage equality over the past half-decade, resulting in broad, sweeping Supreme Court decisions legalizing same-sex marriage. In the same way, the Parkland shooting and the activism that has emerged from it is having an impact that the Million Mom March of 2000 or the reaction to the Newtown shooting in 2010 did not have. A broad cross-section of America is uniting behind its young people and the teachers who educate them, concerned for their safety and for their democracy. These activists see the democratic political system at their disposal as their only hope to bring about the social and legislative change that they are calling for. Once Congress and state legislatures across the nation have put in place the laws they demand, only then will they feel safe in our nation’s public spaces, especially its public schools.

[Opinion] Barack Obama: A Role Model for Teachers and Students
« An Act Declaring April the Worst Month to Teach
So You Want to Be a Teacher? »