The developers of the Common Core, famed for limiting student readers to the “four corners of the text,” may not have selected to teach Toni Morrison novels to high school juniors or seniors.

How could those admirers of New Criticism who believe that the student should not stray from a “painstakingly crafted text” ever negotiate the mess she created with each novel?

Toni Morrison did painstakingly craft each text. That much is true.

But, her explosions; her ideas and allusions; those historical, literary, and religious references, literally and figuratively bound off each page. Which corner of the text could hold such canon fodder? (pun intended)

And then there are her implosions, the deep dive into language, her nuance and the syntax where one word or syllable could shade understanding. How far down the language abyss is that corner of the text?

The mess in reading Toni Morrison

Reading Toni Morrison in the classroom means spilling over corners and making a mess.

I have been in the mess of teaching two of Morrison’s novels: Beloved

and The Bluest Eye

I brought both novels to students in Advanced Placement classes. I would offer them later in the school year after the students had several months of practice in analyzing literary passages.

During those several months, students would be trained to find the answers to questions that started:

These Common Core styled stem questions do work very well with Edith Wharton, with F. Scott Fitzgerald, or Willa Cather.  They do work well with Shakespeare, with Milton, and extremely well with Thomas Hardy.

For these works, there can be neat and tidy answers. Everyone in the class can agree that “C” is the best choice for a multiple-choice answer. But use these stem questions with Toni Morrison and the mess begins.

Arguments abound! No one agrees.

And that may be her point.

Maybe the mess happens because of how Morrison trusts -or does not impede - her readers.

While some authors control the reader, trying to guide them to understanding, Morrison leaves the reader on his or her own.

That “Get it or Don’t,” attitude can be frustrating for students, especially for those who have always succeeded with a mostly white male literary canon.

Get it or Don't

Take, for example, a The Bluest Eye chapter title:

“What does this meeeeean?” students whine, stymied by her word play.

A selection from Chapter 22 of Beloved:

“What is going on? Who is talking?” students demand, just trying to get a grip on the basics.

Letting them find an answer (Perhaps a descent into madness? Channeling a memory of the Middle Passage? I have no idea? What do you think?) is messy because Morrison does not make it easy.

While some authors gently guide or prod or drag their readers along, Morrison leaves them alone, letting them make their own mess of understanding.

Toni Morrison’s death this morning (August 5, 2019) will certainly spike interest in her novels. Teachers may be more likely to choose one or more of her works this coming school year.  If they do, they should prepare for the spilling over the corners of the text.

They should know Morrison forces students to look beyond the answer and uncomfortably stirs their souls to ask more questions.

And just when they, students and teachers alike, think they grasp  her painstakingly created text, I can imagine that Morrison is watching, nodding her head, “Yes, yes….” and then adding the softest, “But….” 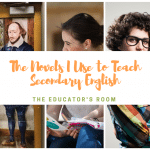 The Novels I Use to Teach Secondary English

Close and Critical Reading: What did we just read?

Tracking is a Dirty Word
« Why Your School Doesn't Need to Adopt a “Social-Emotional Curriculum”
Are You a Broke-Down Teacher? »