On my bathroom wall at home, I have a large framed drawing my son made in first grade. It has a lot of underwater action, including thought bubble over the shark saying “I am the king of the ocean.” Another thought bubble over a fish close to the shark’s mouth reads, “I am going to die!” It is a fun picture but it wasn’t until I was teaching second grade that I realized that this was a detailed story my son had “written.” The actual writing in his daily journal was pretty basic. It usually just read: My best friend is Scott. I like to play with him. I like Vince and Justin too. They are fun.

Primary boys often struggle with writing stories, fact or fiction. Frequently, their journals are full of elaborate drawings instead of writing. If you conference with them about these drawings, you will discover that they have drawn their story. At the beginning of second grade, I would say over half my boys “wrote” their stories this way.

The goal is to get boys (sometimes, but less commonly, girls) to get their stories written in words not pictures. Each fall, I did the following mini-lessons with the class, either as a whole group or with the children struggling with getting their stories out into sentences.

1. Quick Draw Teach the whole class how to quick draw sketch. Using just a pencil, you draw a sketch of an action. We had fun with this. I used chart paper although a smart board would work. The class found ways to show action, such as lines to show movement or Z’s to show sleep. I told them they couldn’t spend more than two minutes on a picture. No colors, no fancy details. The idea was to get an idea down in picture form as fast as possible. (I had a no marker or crayon rule for writers’ workshop unless it was a special project.) We used the quick draws for all sorts of activities through out the year so this was always taught to everyone.

2. Folding Paper The next lesson might seem weird to add to a writing class but believe me, it pays off in spades. Teach the class to fold paper in quarters. Someone somewhere has to teach them to do this correctly. I guarantee that a least one child will cry because it is too hard. Be patient. (Do you think Arne Duncan even imagines this happens in a classroom?) By the time you are done teaching them to match corners and crease paper, the majority of your class will be thrilled to have learned this life skill.

3. Breaking the Story into Bits Have the students who prefer to draw rather than write, fold a sheet of notebook paper in quarters. After opening the paper up, have them put a small number in each box on both sides of the paper. (Take my word for it, if you just say number the boxes, they will fill the box with the number.) Using each box to sequence their story, allows them room for seven or eight sentences. In the beginning, I have them write a name for their story in box #1. This helps them to remember what they are writing about and not go off on a tangent. Next, I have them draw the first bit of the story in box #2. They are asked to leave room for a sentence about the picture. They repeat this for each box. Remind them to check Box #1 before they begin another box, to make sure they are still writing about their story.

I allow anyone who wants to use this technique to do so for a couple of weeks. More secure writers leave this system behind quickly. Some kids cling to this method so you will need to prod them to add details and elaboration. They can rewrite the stories in prose after they complete their boxes. Some will want to fold another page to keep the story going. Use your judgement on whether the story needs a little more to complete it or if they are just going off on some wild never-ending journey.

I hold the “box” writers to the same rules as my other writers. They need to apply the strategies I teach in writers’ workshop to their writing. Concepts such as “show, don’t tell” or varying sentence structure need to be included in the writing they generate.

Nearly always, the need to draw their story disappears after a few weeks. By the end of the first marking period, there is usually only one or two clinging to the need to draw. At least it does during writers’ workshop. It still shows up when they get a chance to draw during science or, even better, when we learn to story map in reading.

After teaching this technique for several years, I was helping my 90 year old father-in-law clean out some cabinets. Can you believe that we found an elaborate drawing of a battle he had made when he was seven?

“Tom, what is the story you wrote here?”

“Well, it was World War I, and this is where the fight started.” He “read” the whole eighty-something year old story to me. Pretty sweet.

Click here and here for are a couple of interesting articles about the drawing versus writing phenomenon. 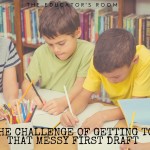 The Challenge of Getting to that Messy First Draft 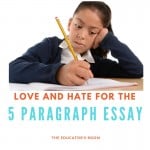 Love and Hate for the 5-Paragraph Essay
« Wiggles, Giggles and Learning
Classroom Management in Middle School »