Richard Riley, the sixth in this post, is the only Secretary of Education to serve an entire presidency, beginning and ending in office with President Bill Clinton (1993-2001). Like Sen. Alexander, Riley also had experience as a legislator, Governor of a Southern state (South Carolina), and made education part of his campaign. Originally he was pegged for the Supreme Court by Clinton, though that would eventually went to Ruth Bader Ginsberg. Riley was the first Secretary of Education to promote the idea of national standards, which were not as controversial as they are today. He also continued many of Alexander's reforms listed in (what would become) their Goals 2000 Plan. Two of the difficult terrains for Riley to navigate involved the possible shutdown and gutting of the federal government in the 1994 Contract with America while providing funding for popular programs such as the Title I measures and Pell Grants. He was popular with Republicans and Democrats alike, and teachers and reformers found him palatable. In 2015, Mr. Riley was awarded the NAFSA Outstanding Leadership in International Education Award.

Our enhanced evalumetrics find Mr. Riley earned himself a "Proficient."

Rod Paige was the 7th Secretary of Education (2001-2005). Serving under President George W. Bush, he came from humble roots; both his parents were teachers, and he'd enter the classroom himself to teach health and PE, and coach football. Paige would eventually become an athletic director, professor, college dean, and school superintendent of Houston (the first to serve in this post). In the last of these roles, Paige touted performance contracts, incentivized pay, and contracted with private schools to teach children. He also orchestrated No Child Left Behind as it was made law in 2001, ushering in the age of testing; Paige would later call the NEA and its members a “terrorist organization" for resisting NCLB.

Dr. Paige, I'm sorry, but my advanced evalumetrics finds you "Unsatisfactory." We have contacted your supervisor to begin an improvement plan immediately.

President Bush's second term would find Margaret Spellings at the helm. The 8th Secretary of Education was an associated director of Texas School Boards and a Bush adviser to his first term. She was a champion of NCLB who became more reasonable as the days were peeled from the calendar; she gave some pretty interesting reflections on the law years later. Much of her early tenure was rife in the Postcards From Buster meleee (lesbian rabbits living in Vermont). Today she serves as President of the University of North Carolina and makes an interesting evaluation on what the future of education would look like.

While my numbers have issues with her comments on social factors (especially gay rights), she still emerges as  "Proficient."

Arne Duncan almost followed in Mr. Riley's foosteps, serving in President Obama's Administration as the 9th Secretary of Education from 2009-2016 before resigning. His dad is a professor, while he was International basketball player before becoming a charter school owner. His most prominent and controversial role came as CEO of Chicago Public Schools. He pedaled Race to the Top, which offered an infusion of cash to states sponsoring charter schools and standardized tests (his big controversy was saying the tests show to "white suburban moms" that "maybe their kids aren't that smart after all"). Teachers know Duncan for his increased focus on evaluations and that he become the flag bearer for Common Core. For these reasons and several others, Sec. Duncan received a vote of no confidence from NEA in 2015, while AFT created an improvement plan for Duncan a month later for this "divisive figure." He did, however, find a way to divert some of the federal money in the recession recovery to plug the hole on the teacher-layoffs ship. While he oversaw the changing of NCLB to the Every Student Succeeds Act, the federal government never wielded more power over education and wrested control from the front of the classroom. He know serves as partner in the oddly mystical Emerson Collective.

While the evaluation waits for its building score and other variables, Mr. Duncan is currently sitting on a "Needs Improvement." His supervisor has been contacted.

When Mr. Duncan resigned, John King became first the interim and now the 10th and current Secretary of Education. Like Dr. Paige, Sec. King's mom was a guidance counselor, while his dad was teacher and admin. Still, he lost both of them at a young age. King began his foray in education as a history teacher and founder at charter schools, and later became a principal, and then the Commissioner of Education of State of New York. In this last post, he began a listening tour while implementing Common Core, which was controversial to parents and the teachers’ union alike, before canceling. While his predecessor initiated the law, King ushered in ESSA.

He's been in the post for just under a year, so, for now (and maybe forever), his evalumetrics lands him an "Incomplete."

So there you have it, educators. Ten Secretaries of Education.  One Unsatisfactory. Two Needs Improvement. Five Proficient. Zero Distinguished. And 2 Incomplete. Probably the most important take-away from this is that education is a bipartisan or non-partisan issue. We've had great and controversial leaders of our profession from both parties alike.

How will the next Secretary of Education pan out? Leave your predictions below. Why Passing A Standardized Test Should not be a Graduation Requirement 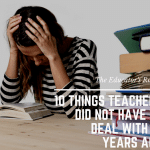 10 Things Teachers DID NOT Have to Deal With 10 Years Ago
« Book Review: 'Play Like A Pirate'
[Podcast] What's Best for Children: An Interview with Susan Ochshorn »