As President-Elect Donald Trump has been nominating his Cabinet appointments, plenty of contention and consternation has swarmed and surrounded his selection of Mrs. Betsy DeVos as Secretary of Education. While plenty of articles have been written about her, I was curious to learn more about the Secretaries of Education who preceded her. The Department of Education is one of the newer offices in the Cabinet. After three years of debate within the legislature in creating the department, a bill was signed into law by President Jimmy Carter on October 17, 1979. Prior to that, educational issues were overseen by the Secretary of Health, Education, and Welfare.

When the department was created, Pres. Carter tapped Judge Shirley Hufstedler, a legal mind who had no educational experience, to lead it though its infancy. Only serving in the post for roughly 15 months, her accomplishments are difficult to tally. However, she did say she took the post to "fight for programs the disadvantaged and disabled" lost.  For that reason, I give her a "Proficient" rating on the Secretary of Education evaluation system that is, not unlike the teacher evaluation system implemented in America, rooted in so many calculations that you or any other stakeholders could hardly understand it. I'd show you the statics behind our patented "evalumetrics" program, but you wouldn't understand the spreadsheet. I still don't.

The second Secretary of Education was Dr. Terrel H. Bell. Bell was a high school teacher and bus driver, a school superintendent, and a Utah Commissioner of Education. When President Reagan appointed him to lead the DoE, he was supposed to dismantle the office. However, after he commissioned the study that would become A Nation at Risk and faced the challenges facing infamous "rising tide of mediocrity," he balked. He would become Reagan’s “master teacher as far as education," stated Bell's chief of staff. However, Bell resigned in 1985 after Reagan's first term and became professor and consultant. Bell's signature push was what he called "motivation in the classroom." Today, the Terrel H. Bell Award for School Leadership named after him.

My complicated evaluation system awards Dr. Bell a "Proficient" as Secretary of Education.

The third Secretary of Education is Dr. Bill Bennett, who served in part of Pres. Reagan's second term (1985-1988). Prior to his appointment, Bennett served as director of the National Humanities Center and as Chair of the National Endowment for the Humanities. He switched parties (becoming a Republican) before being tapped, something that is pretty much "illegal" in most political circles today. Bennett almost wasn't SecEd; he was chosen instead of Mel Bradford (who was a pro-Confederacy traditional conservative). His big push during his tenure was STEM education, but many educators, legislators, and Americans found him to just be "pushy."

Bennett would step down as SecEd to become the nation's first drug czar. This led to some controversial comments on aborting “all black babies” which he said would "cause the crime rate to go down," while also arguing if Roe v. Wade were overturned, Social Security would be saved. He eventually walked back those comments. Today, Bennett is a conservative talking head, writer for The National Review, host of Morning in America radio, and co-founder of the educational company K12 Education.

While there are some merits to focus on STEM education, my evalumetrics system labels Mr. Bennett as "Needs Improvement."

Lauro Cavazos (1988-1990) was the fourth Secretary of Education. Previously, he served as a professor, a dean, and President of Texas Tech University. He was the rare Democrat who served over not one, but two Republican administrations (closing out Reagan and opening Bush's terms) - also now highly "illegal" in today's litmus tests of politics. Cavazos's focus centered on school choice, a summit with all the stakeholders, and righting the ship on the declining loan program. However, he was forced to resign after improperly using frequent flyer miles. Today he’s a professor of public health and family medicine.

After running his data through our program, Cavazos receives an "Incomplete."

Lamar Alexander was the fifth fifth person to head the DoE. This former Congressional aide, Governor of Tennessee, and presidential candidate was appointed by President George H. W. Bush to help launch educational reform similar to what Alexander proposed in the Volunteer State and as a presidential candidate (this was called the Better Schools program), which he hoped to focus on STEM and to pay “master teachers” more (though this merit pay component failed). From his appointment, Alexander had to navigate a difficult issue in regards to scholarships and minorities. In 1992, he famously declared that "in 5 years, school choice will no longer be an issue." Those in education know how wrong he was on that one.

Today Alexander is seen as an almost extinct species in the District of Columbia; something that used to be known as a "moderate." He’s moved on from the Republican party leadership to find common ground among all stakeholders, especially in education. That earned him the NEA's Friend of Education Award in 2016, the first Republican to earn the award since Arthur S. Fleming in 1982.

My evaluation credits Sen. Alexander with a rating of "Proficient" - with the ability to move to "Distinguished."

Check in later for Part 2 of our article. In the meantime, feel free to check out a couple of these sources to read: 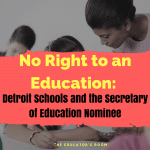 No Right to an Education: Detroit Schools and the Secretary of Education Nominee 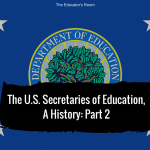 The U.S. Secretaries of Education, A History: Part 2

Considering the Case for Betsy DeVos
« Math Education: Why U.S. Students Fall Behind
Chicken Little: The World of Education »