Using "Hamilton: The Musical" in the Classroom | The Educators Room Skip to content
Previous Next

Using “Hamilton: The Musical” in the Classroom

Hamilton in the Classroom

Unless you have been living under a rock, you have probably heard of the Broadway musical Hamilton, the hip-hop and rap production of the life of Treasury Secretary Alexander Hamilton, written by award-winning musical playwright, composer, and actor Lin-Manuel Miranda. Many of your students know the play well. In fact, many of your students know every word and note of this musical that combines rap, hip-hop, British pop, and lofty musical themes into a spellbinding, fast-moving, modernistic account of the American Revolution and the establishment of the republic that followed. Since the play has skyrocketed to the forefront of the American music and theatrical scene, teachers at every level of education and in disciplines across the curriculum are using Miranda’s Hamilton, a masterpiece based on Ron Chernow’s biography of the same name, to light the fire of learning in the minds of their students.

In The Language Arts Classroom

It’s hard to decide as a writer and as teacher which discipline the play fits into the most: its imaginative use of rhyme and masterful linguistic expression gives language arts and English teachers so much to work with. Still, the play is set during the American Revolution and deals with the lives and flaws of the nation’s founding fathers. It takes the pantheon of early American political history and brings it down to earth to reveal the humanity and hubris of those who put the greatest nation the world has ever known into motion. So, at the risk of alienating scholars in my own discipline of the social sciences, Hamilton holds a pre-eminent  position as a masterful telling of the story of America’s birth pangs as told by the voices and faces of contemporary America. As such, the play demands that its relevance in the language arts classroom be treated first. (In the paragraphs that follow, literary terms that reflect the powerful content of Hamilton: The Musical are in bold).

Lin-Manuel Miranda’s family emigrated from Puerto Rico, and so one of the dominant themes of the show is that of America as a land of immigrants. Miranda’s first play, In the Heights, also described the vibrant life of a Latino neighborhood in New York (Lin-Manual Miranda, Hamilton: The Revolution, pg. 14). Miranda reconstructs Chernow’s biography around the precocious Hamilton, who emigrated in 1774 from an island in the Caribbean. Always striving to compensate for his poor station in a status-hungry world, Hamilton claws and climbs his way through colonial society, first by marrying Eliza Schuyler, the daughter of a wealthy New York landowner, and then by serving as Washington’s aide-de-camp during the Revolutionary War and later as his treasury secretary. Hamilton’s character is developed to represent the quintessential tragic hero as he becomes involved with one Maria Reynolds, an affair perpetuated by Reynold’s very own husband. As the affair becomes known to the general public, Hamilton’s chances of becoming president of the United States go up in smoke. He is able to salvage his marriage to Eliza, but in a strange combination of verisimilitude and foreshadowing, Hamilton’s own son is killed in a duel, ironically at the same dueling grounds where Hamilton will arrive at his own fate.

Miranda’s play powerfully poses the thematic issue of facing death throughout a life of trial and tribulation. Hamilton survives a hurricane as a boy, watched his mother die, lost his runaway father, and came to America by ship as an outsider, eventually leading troops to victory at Yorktown to later forge America’s constitutional government and financial system. The theme of facing death is seen repeatedly as Hamilton expresses his innermost thoughts:

“I imagine death so much it feels more like a memory
This is where it gets me: on my feet
The enemy ahead of me
If this is the end of me, at least I have a friend with me
Weapon in my hand, a command, and my men with me.”
(Miranda, pg 121)

Hamilton survives the war by striving to reach his goal of greatness, always reminding himself and the audience “I’m not throwing away my shot.” But he literally throws away his shot in his famous duel with Aaron Burr, hoping Burr would be a man of honor and refuse to fire. Hamilton’s final interior monologue is masterfully expressed as he and Burr point their pistols at each other on that Weehawken dueling ground building the dramatic tension as it reaches its violent and tragic climax with the death of Hamilton. Again, Hamilton, thinks aloud:

“I imagine death so much it feels more like a memory
Is this where it gets me, on my feet, sev’ral feet ahead of me?
I see it coming, do I run or fire my gun or let it be?
There is no beat, no melody
Burr, my first friend, my enemy
Maybe the last face I ever see
If I throw away my shot, is this how you’ll remember me?
What if this bullet is my legacy?”
(Miranda, pg. 273)

Using Hamilton: The Musical in the language arts classroom can also involve examination into the use of colloquial language in theater and art. Miranda uses rap and hip-hop mechanisms to tell the story of the early American republic, some of which are an homage to rappers that have come before him. The song “Ten Dual Commandments” is a salute to the “Ten Crack Commandments” by Notorious B.I.G. The song uses the number 10 as a theme throughout the play, especially since Hamilton eventually appears on the ten dollar bill (Genius Lyrics, https://genius.com/Lin-manuel-miranda-ten-duel-commandments-lyrics, available, 2017)

Students are often inspired to create their own rap, poetic, or prose creations on literary topics or to historical figures with Miranda’s Hamilton as their muse.

What Is a Legacy?

Hamilton’s early demise at the age of 49, his checkered career in and out of politics, and his preoccupation with social status leads Miranda to pose the question of “who lives, who dies, who tells your story?” The relationship of the nation’s first commander-in-chief, George Washington, and Hamilton, whom Washington treated as a son, is explored in songs such as “History Has Its Eyes on You” and “One Last Time.” It is through Washington that Hamilton rises through the military ranks and eventually as leader of the Treasury Department in the first cabinet. But it is Hamilton’s wife who is content with just having Hamilton come home alive. In the song “That Would Be Enough” she tells him,

It is a bittersweet irony that it is Eliza that lives fifty years beyond Hamilton’s death. She is the one who establishes the Orphan Asylum Society, which evolved into the modern day home for orphans known as the Graham Windham
(http://www.graham-windham.org/about-us/history/).
Eliza also raised funds for the Washington Monument and worked to rectify Hamilton’s reputation as a statesman and soldier. While Hamilton’s legacy is a mixed one, his place in American history is unimpeachable.

In the Social Studies Classroom

The story of Alexander Hamilton is told across the tableau of the American Revolution, the writing of the Constitution, and the development of political parties. Social Studies teachers in history, civics, and government have a rich menu of text and song to act as the starting point for research or discussion.  Here are just a few topics for exploration that teachers can use to spark students’ curiosity.

How teachers use these songs to teach the topic is within their own discretion, but teachers have used the lyrics to act as the starting point for research and writing in advanced placement classes (https://ww2.kqed.org/mindshift/2016/03/14/how-teachers-are-using-hamilton-the-musical-in-the-classroom/). Students can examine the words of the wide range of characters to support or critique the position held by that character. Take “Cabinet Battle 1” as an example of an issue faced by the first cabinet and that still resonates today. In this song Hamilton and Jefferson spar verbally over the issue of the federal government’s taking on the financial burden of the states in order to establish credit for the young nation. Miranda cleverly points out Jefferson’s hypocrisy as a slaveholder:

If we assume the debts, the union gets
A new line of credit, a financial diuretic
How do you not get it? If we’re aggressive and competitive
The union gets a boost. You’d rather give it a sedative?
A civics lesson from a slaver. Hey neighbor
Your debts are paid cuz you don’t pay for labor
“We plant seeds in the South. We create.”
Yeah, keep ranting
We know who’s really doing the planting

Challenges and Changes in Teaching with Music

Hamilton tells the story of early America using modern vernacular and musical genres. Miranda also insisted on reflecting the diversity of America in his Broadway cast. In his book on the development of the musical, Miranda wrote “American History can be told and retold, claimed and reclaimed, even by people who don’t look like George Washington and Betsy Ross. (Miranda, pg. 95).” The use of modern terminology and ethnic variations in language forces teachers to take precautions that require preparation and common sense. Hamilton’s lyrics are peppered with adult language and profanity, so while the play might be more appropriate for older audiences, teachers need to prepare both students and parents that their sensitive ears may be offended by sexual content. For younger audiences, creation of a clean edit or the use of a parental permission slip with the approval of the administration may be in order. For older adolescents, no such precautions may be needed, but teachers can never be too careful.

Teachers in the music and theater classroom also have a rich opportunity to bring history and literature into their curricula by introducing their students to Hamilton: The Musical. It won’t be long when high schools will be performing their own versions of the musical. Cover versions of many of its songs can now be found on Youtube.com and other social media outlets. Teachers of younger students must exercise caution when choosing which songs to use in the classroom, but it can be done tastefully and in a way from which students can benefit. It is hard to assess at this early stage how Hamilton will influence this generation of students – to become more interested in the roots of American government, or to become thrilled with music, dance, and acting that has meaning and power for people all over the world. For that we must thank Lin-Manuel Miranda and the pioneers that brought Hamilton to life on stage and back to life as the “Ten Dollar Founding Father.” 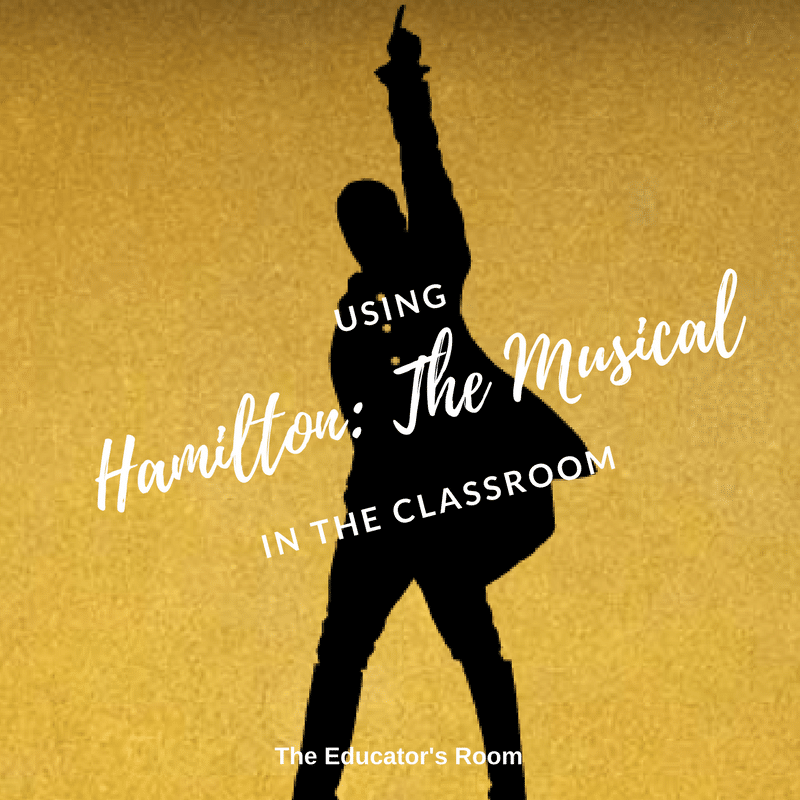